This is the next installment of how I came to work with Bill and Dan Denning at The Agora more than 15 years ago. (Catch up here.)

Addison, our colleague at the business, got back to me. He told me The DR wasn’t hiring but to keep in touch. I quit my job anyway and flew to Mexico City in search of adventure.

To make things interesting, I didn’t take any money with me. Not a penny. My mother was so worried about this, she cried at the airport and tried to give me a credit card “for emergencies.”

I traveled from Mexico City to Mazatlán, a port city on Mexico’s Pacific coast, by hitchhiking, riding a freight train, and sleeping outdoors. In Mazatlán, I snuck past security and onto a ship that was taking long-haul truckers across the sea to Baja California.

When I emerged from my hiding place – a crawl space at the back of the ship – I found truck drivers gathered around a little canteen on deck, drinking and eating.

I couldn’t buy anything. I ate leftovers from trays that hadn’t been cleared…

The truckers partied all night… playing loud salsa music and drinking so much beer they overflowed the ship’s dumpster with cans.

I slept on the metal deck.

In the morning, we docked at Cabo San Lucas. The drunk truckers got in their trucks and drove away. I walked off the boat and stuck out my thumb…

It took me three or four days of hitchhiking to get to San Diego. I slept outside. I caught rides with a doctor, a club owner, the supervisor at a salt factory, and several truck drivers, one of whom brought me across the border.

My brother drove me from San Diego to Las Vegas. In Vegas, I caught a ride on an eastbound freight train by climbing into the cab of a locomotive with the engineer and the brakeman.

In the meantime, let’s check in on our Dow-to-Gold trade…

My Big Trade is a down bet on the Dow-to-Gold ratio (you can catch up here). It peaked at 41 in 1999. It’s at 19.1 today. I’m convinced it soon will be below 5. The chart below tells the whole story, including how the primary trend turned to “down” last fall… 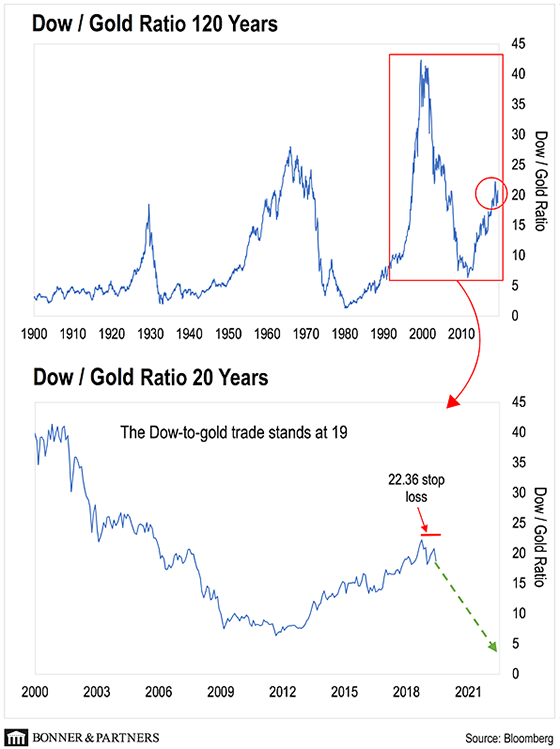 I have put our entire life savings into gold. I persuaded my mother and brother to follow me, though in a more conservative manner. (My father and my other brother brushed me off. They still own stocks and do not own gold.)

I recommended my trade to Bill and Dan’s readers in last month’s issue of The Bonner-Denning Letter (subscribers can access it here). As long as the ratio stays below 22.36, I’ll keep proselytizing. Above 22.36, the Dow-to-Gold ratio is not in a downtrend.

P.S. In the last two weeks, we’ve stayed in six hotels and Airbnbs. It feels like we’re always on the move… always packing and unpacking… always sleeping in different beds with different pillows… always trying to figure out a new shower…

Today, we checked out of the western-style luxury hotel in Bangalore and hit the road again. We are headed to Goa by plane.

I’m getting tired. We’ve been doing this for over a year now.

When we go to Southeast Asia later this month, I’ll rent an apartment in Hanoi for a month. We’ll catch our breath there.

After Hanoi, we go to China for three months…

P.P.S. And please keep writing to me. Good or bad, I want to hear from you. I promise we’ll publish your letters in the mailbag section of the Diary. Reach me here.