SWEET HEART GUEST HOUSE – The rumor today is they’re imposing a curfew on Hong Kong this weekend. Anyone in the streets after a certain time gets arrested. We’ll see…

Greetings from Hong Kong. Chaos reigns. On one side, you have a hard core of kids running amok, confronting the police. On the other side, an ineffectual police force charging around Hong Kong like an angry bull making everything worse.

But the truth is, it’s perfectly safe for tourists in Hong Kong. We’re not in any danger. Today, we went to the park and played on the playground…

Here we are inspecting some graffiti on the way. It says: “Who do you call when police rape and murder?” 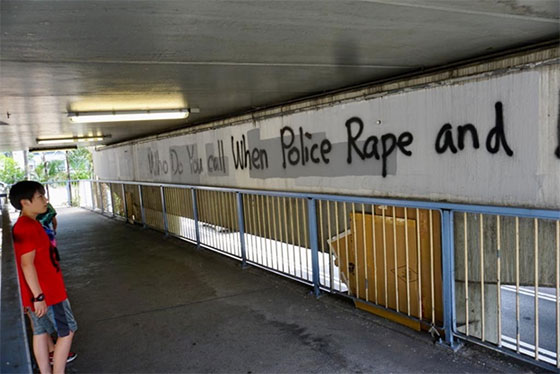 Losing Millions… and Getting Worse

The big issue is economic. Shops are closed, restaurants are empty, and tourists are staying away. Now they might be imposing a curfew over the weekend. Hong Kong retailers will lose millions…

Official statistics already show GDP contracted by 2.9% in the third quarter. The fourth quarter will be much worse…

Hong Kong is one of the world’s three most expensive places (Paris and Singapore are the other two). Its real estate prices are the most expensive in the world. Its currency, as I wrote on Tuesday, is pegged to the U.S. dollar and therefore richly valued. And it has a highly leveraged banking system.

Things could get pretty bad… But now, look at this… 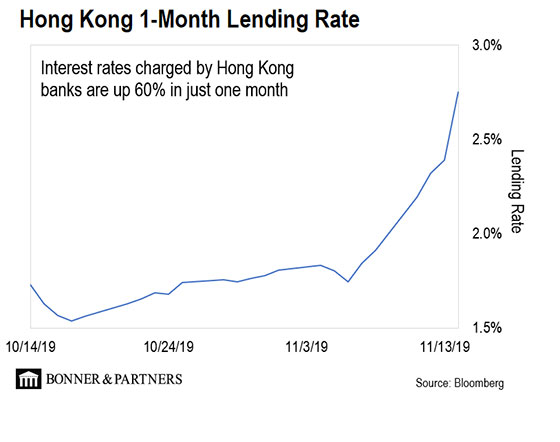 The last thing Hong Kong needs as it falls into recession is higher interest rates. High interest rates choke consumption, hurt property prices, and will accelerate the crash in the economy.

Soon the administrators of Hong Kong’s currency are going to be faced with a tough decision: maintain the peg, but allow a sharp recession, a banking crisis, and maybe a property crash… or break the peg, devalue the Hong Kong dollar, and engineer a soft landing.

I bet they devalue the currency.

If I lived in Hong Kong and had my savings in Hong Kong dollars, I’d be converting them to U.S. dollars at the fixed exchange rate as fast as I could. One look at that interest rate chart above tells me I’m not the only one thinking this way…

With Tom and family in Hong Kong – and after Tom’s recent run-in with tear gas at a violent protest – someone asks: “Have you lost your mind… again?” A few others echo this sentiment in the mailbag today…

But first, other readers weigh in on Tom’s observation that it’s just a matter of when, not if, the Hong Kong dollar crashes (get the full story at the link above)…

Reader comment: In August 2018, HK forex [or currency market] reserves were $1.8 trillion according to the South China Morning Post. This is about five times 2018 GDP. There is capital flight to Singapore. But the HK monetary authority has lots of ammunition to fight shorts.

Reader comment: I don’t believe China will let it happen. I suspect one day the Hong Kong dollar will just go away. China will absorb it.

Sniffing tear gas means you are at the flashpoint of globalism pushing against China. With best wishes to you and your family. Come home safely.

Tom’s response: I ran my theory past a money manager here in Hong Kong. He said the same thing – that China would defend it.

Reader comment: Love reading your postcards. Getting gassed in Hong Kong – how terrifying – you won’t forget that one any time soon. Please give some ideas on how normal investors might bet against Hong Kong.

Tom’s response: I wouldn’t recommend betting against Hong Kong. Leave it to the professional currency traders. Instead, buy gold.

The recession and currency issues in Hong Kong are going to be repeated all over the world over the next few years. Currencies are going to devalue, one by one. Each devaluation will send gold higher.

Now, on to the readers worried about the Dyson family… and a few who don’t agree with Tom’s depictions of Hong Kong…

Reader comment: I live in HK. Things have turned for the worse the last two days. With the students out of school/university, they are the ones making the troubles. It used to be weekends only, but this week is really bad.

Never go close to the trouble. Glad only you went out Tuesday night and not the kids.

I avoided everything by staying away from protests, but it does affect everyone’s life one way or the other. Hotel occupancy is super low, shops close early, airport arrivals are down big. You already experienced some of it.

Reader comment: Do you think it is wise to put your family at risk and exposed to the ongoing civil unrest in Hong Kong? I’m sure that you did not factor the events unfolding before you decided to go there. Take care and stay safe.

Reader comment: I feel you are totally unrealistic about the HK situation. I have lived in HK, Beijing, and Manila a total of 10 years and have traveled to many of the places you have visited. Additionally, HK is different, as it was promised in 1997 by the mainland Chinese that HK would be allowed to continue to live and trade as it did under the British. That worked for a while, until six or seven months ago.

HK Chinese fight for their rightful freedom and lifestyle. It is such typical mainland Chinese behavior – first they pretend, and then they pounce!! HK was a fabulous place when it had freedom. The only reason its economy is tanking is HK people are fighting for their existence and human rights.

I would not dream to go and visit HK at this time, and I do not believe tourists are rushing there for tourist attractions in the middle of HK’s fight for actual life.

Reader comment: I congratulate you on your endeavor to show your family the world the way you do. I enjoy your postcards but have to admit we did not rough it the way you do!

I have to speak up for the HK people, as we found them to be most motivated and creative, and I hate to see their spirit broken. I wish you all the best for the rest of your venture and your future!

Reader comment: Been following your travels the last few weeks with interest. We are Brit expats living in Hong Kong for almost 25 years. Your comments (and subject lines) about HK are just a wee bit sensationalist, don’t you think? Clickbait, even, which is what “the media” tends to pursue as well.

Did you see the packs of yellow-jacketed journos chasing the action? There are often more of them than there are rioters. Usually plenty of gawkers and tourists, too!

Yes, the violence is upsetting, but it is very, very isolated. While the protest marches brought out hundreds of thousands (over a million on one occasion), there is very little support for the rioters, who seem to be mostly in their teens.

If you don’t go out looking for trouble, as you did, you will never see another “riot” in your time in HK. Isn’t that how you’d treat a stopover in any large American city? Avoid risky areas, which often have muggings and shootings on a regular basis?

Hong Kong remains one of the safest cities in the world, especially for “gweilos” (white ghosts) – just don’t go looking for those protest hot spots again.

As for your dire warnings for the incipient implosion of the property market, HKD peg, and economy in general (I think you missed the plague of frogs) – well, time will tell. I just sold one of our flats at a near-to-highs price.

To quote Mark Twain, “Reports of my death have been greatly exaggerated.” Enjoy your time in Hong Kong. Lots to see!

Tom’s response: I agree. Hong Kong is safe. I went looking for trouble, but it would have been so easy to keep away. Would you use the Hong Kong dollar as a store of value?

Reader question: Not really sure why you would take your precious family to HK with the riots being all over the news for the last month. With the internet, you should be aware of that.

Wondering why the train and customs hall are empty… why would anyone be going there now? People shot, all the riots daily? Why go and risk this?

Tom’s response: We have had this trip booked for months. And besides, the media always exaggerates these things. The troubles are very isolated.

Reader comment: This is when the luxury hotels will be lowering their prices. Please go for one of them. It’s time your wife (ex) and kids get some luxury for a change. All the best!

Reader comment: I’m enjoying your travels and hope they turn into a book. I was a student at UCB in the ’60s and ’70s and inhaled tear gas at many demonstrations (tried to take morning classes because the protests usually began around noonish).

Hope you can avoid more troubles, but it’s tempting to see what is going on. Please stay safe and keep the letters coming.

Reader comment: I enjoy reading your postcards, but 10 days in Hong Kong? Why so many, given the current state of affairs? Have you lost your mind… again?