JAPAN RAIL SUPER EXPRESS #413, SOMEWHERE OUTSIDE FUKUOKA, JAPAN – We spent the day in Kagoshima today. We had to go to pick up my camera from the Lost and Found office there.

Kagoshima is one of the only places in the world where an active volcano and a big city exist side by side. The volcano is called Sakurajima. It erupts several times a day, including while we were looking at it.

We got the camera. Then we ate shabu-shabu. Then we went to see the volcano. We got to it by riding a ferry across a bay. 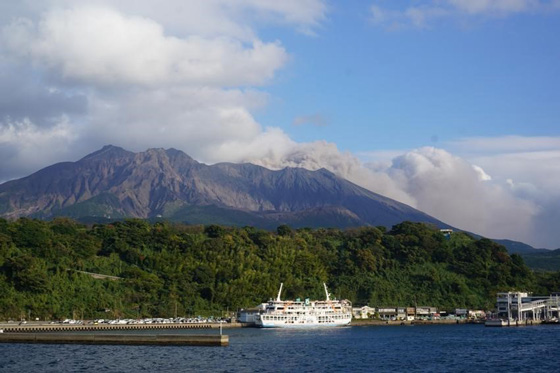 We walked around a bit at the base of the volcano, visited the visitor center, and dipped our feet in the hot springs. Then we wiped the ash from our eyes and went home.

Here we are at the hot footbath… 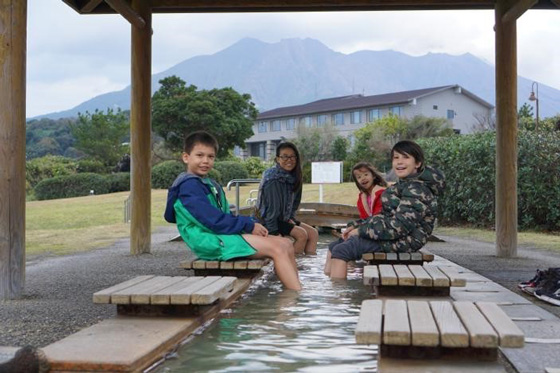 Kate and the kids (Miles, Dusty, and Penny) at a hot footbath in Kagoshima

Now I’m writing to you from the bullet train. The boys sit next to me listening to The Once and Future King through earphones. Kate and Penny are sleeping.

We’re almost home. Two more stops to Fukuoka, then a 20-minute walk to our Airbnb apartment.

In all, we traveled more than 350 miles today to get my camera.

Here we are queuing up to get on the bullet train… 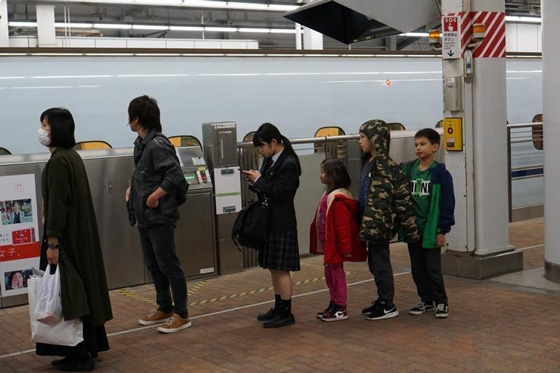 From right to left: Miles, Dusty, and Penny getting on the bullet train to help me find my lost camera

My family and I are now in the final week of our 18-month round-the-world homeschool field trip.

We have Japan Rail Passes, and we’ve been zooming around Japan on the bullet trains, visiting tourist sites, eating sushi, and hunting for Pokémon.

Next week, we’ll fly to Vancouver, where we’ll complete our loop around the world. We’ll spend a couple of weeks in Alberta visiting my brother and his family.

Then, we’ll spend a couple of weeks in Britain visiting my mother and attending my grandmother’s 100th birthday party. Then, we’ll travel to Baltimore in January.

It’s been five days since I stopped looking at my phone. I have no idea what’s going on in the world… not a currency movement, not a news headline, not a Trump tweet. I don’t even know the latest news about Meghan and Harry.

But I still receive your messages. Kate reads them to me out loud in the evenings.

As for the market, I don’t need to know what’s going on there. I already know what’s happening.

The U.S. government is insolvent. It cannot function in a world where foreign governments are not adding Treasury securities to their balance sheets, which hasn’t been happening since 2014. So in September 2019, the Federal Reserve began its long, slow, soft bailout of the government.

This chart is all we need. It shows the total assets of the Federal Reserve. If I’m right about this bailout, we should see this line quickly rising over $5 trillion. 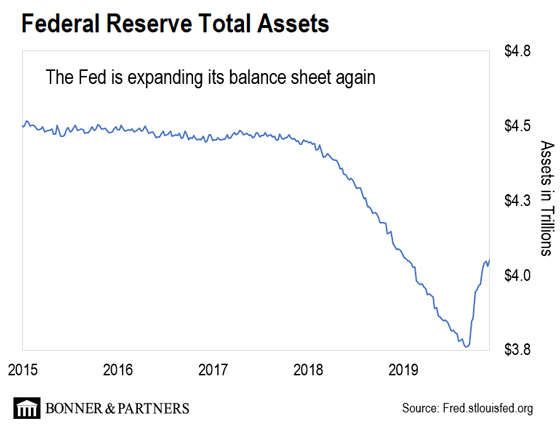 If there’s a recession or a bear market, this bailout will speed up by an order of magnitude. That’s because the government’s tax receipts are closely tied to the performance of the stock market and the economy.

The stock market is so important to government finances, if it starts to fall, the Fed will probably prop it up. Same with the bond market.

The asset it’ll sacrifice is the dollar. Trump’s already been advocating for this. And that’s why gold is the correct bet now.

Yesterday, I said no one in conventional mainstream economics and finance is prepared for this devaluation. I shouldn’t have said that. There are at least two parties that are preparing…

The Chinese and the Russian governments. They’ve been buying tons and tons of gold. Why would they be doing this if they weren’t expecting a devaluation in the dollar?

They can see where this is going. Just as I can. Just as my colleagues Bill Bonner and Dan Denning can. Just as anyone who looks at the facts can. The facts are there for anyone who cares to look at them. 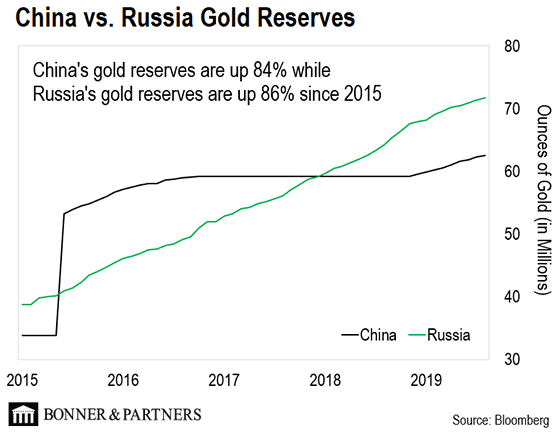 I’m not sure if it’s the wintry weather, the workers scurrying to work in their elegant suits, the impeccable manners, the careful engineering, the A-bomb memorials we’ve been visiting, or just our personal prejudices…

On many readers’ minds today: Tom’s latest experiment to go tech-free, gold and silver, and homeschooling the kids on the road… Some even offer Tom travel advice…

Reader comment: Living without the internet? Now you really are living on the Fringe…

We have over 200k in investable assets that are currently in two IRAs and a brokerage account.

I know you can’t give personalized advice, but I don’t understand how I can convert a large percentage of that fund into gold unless I bury a vault in the yard!

We have about 20k in gold and silver coins in a safe… It’s a large, heavy burden… What are the other ways to invest in gold?

Tom’s response: I had the same issue. I bought gold through my broker by buying the physical gold and silver ETFs. (Check the fees and buy the one with the lowest fees.) I also bought some gold mining stock ETFs.

I’ve been meaning to do research on the various gold and silver ETF offerings because I get this question all the time. I just haven’t had time to get around to doing it yet. Stay tuned…

Reader comment: So, ok. Everyone loves what you and your family are doing. Me too. Soon you’ll be the head of a Bonner & Partners subscription advisory. But now you’re not. So please tell us – in the incredibly wide universe of gold investments – what YOU have invested in.

That’s not prohibited investment advice; that’s reporting. You won’t do it, but why? And I suspect you won’t even get an email like this. Thanks, Bonner staff.

Tom’s response: I have 60% of my portfolio in pre-1933 U.S. gold coins and 40% in a cheese board of gold and silver ETFs and some popular gold royalty companies. That’s the most specific I can be.

Reader comment: I live and work in Japan two thirds of the time, and the other third I’m in Montana. I enjoy the two completely different worlds I and my family have learned to balance. I, like many others, have not only enjoyed your dispatches from the corners of the globe, but have added your experiences to mine and learned so much.

Reader comment: I’ve been working in Japan for 15 years now. I married a Chinese girl who was in graduate school in Nagoya. That was 10 years ago. We now have two young children, a boy (3) and a girl (2). They both speak English, Japanese, and Chinese and are also learning elements of the cultures that go along with the languages. I am so happy about how this is turning out.

My wife and I agree that a few years of Japanese school would be good for the children, but after that, we don’t want them to be indoctrinated in the “in-the-box” thinking that is part of the Japanese education system. I’m thinking homeschooling and traveling are the best course of action. I hope to hear more about your thoughts on this subject as time goes by.

I’ve never bought a share of stock in my life, but I have bought gold. I hope to learn what to do when the Dow-to-Gold ratio hits your magic number.

Reader comment: My husband and I have been enjoying your fresh insights on the cities you visit. We would like to do the same after he retires next year. After all, to see is to believe!

You should visit Ohori Park, the Central Park of Fukuoka, where you see a lot of people jogging and walking in the morning. There is also a playground for kids to play, and you can ride pedal boats in the small lake. Next to it, a small castle remains surrounded by moats. Fukuoka is a nice, laid-back city to visit. Have a great time!

Reader comment: Hello Tom. Your gold investment approach is VERY CLEAR, SIMPLE, and PROFITABLE. I am going to make my goal based on your approach. I am 72 years old, but it is never too late, right?

P.S. I was BORN on Kyushu Island, where you are now, and grew up in a city near Yokohama. Your writing gives me a memory of growing up in Kyushu when I was in public school.

Reader comment: You’re almost there. Why not go to the Okinawa Prefecture? The Ryukyu Kingdom. Only became part of Japan in recent times.

Reader comment: Have really enjoyed your postcards. Have been buying a little gold (and silver) for a while just to put away for when things go kaput. Selling is always difficult due to giving it all to Uncle Sam in taxes. Any ideas on how to keep a little more of it, since most of what I own will have appreciated quite a lot?

Tom’s response: Don’t trade. Keep your profits to a long-term gain classification. Use Roth IRAs if you can. Otherwise, there’s no avoiding giving Uncle Sam his due.

And remember… Your messages are an integral part of these postcards. Thanks to everyone who wrote in. Please keep sending your questions and comments to us at [email protected].