SUNDANCE, WYOMING – The moment we’ve been waiting two years for…

Gold is about to make a new all-time high in dollars. (It’s already making new all-time highs in every other currency. The dollar, the most important currency of them all, is the last holdout.)

Once gold makes a record high in dollars, it’s game on.

Greetings from the Wyoming backcountry…

Another day… another state. I’m writing to you from our new camp just outside Sundance, Wyoming.

I’m in my sleeping bag, tapping out this message to you in the dark on my phone. The fire has gone out. Kate and the kids are already asleep…

We’ve had a long day today.

Jack McCall shot Bill Hickok in the back of the head while Bill was playing poker. He was holding two pair, aces and eights, which became known as “Dead Man’s Hand.” McCall was tried, executed, and buried with the noose still around his neck.

Then we drove through Spearfish Canyon.

The road through Spearfish Canyon winds its way along the bottom of deep canyon and a river for about 20 miles. It’s one of the big tourist attractions of these parts.

Finally, we visited Devil’s Tower, the vertical rock formation in the northeast corner of Wyoming. Here we are hiking around its perimeter…

The boys at Devil’s Tower

Tomorrow, we head for Colorado… and a rendezvous with our colleague and friend Dan Denning, coauthor of The Bonner-Denning Letter…

Fireworks Ahead for Gold

This chart shows the gold price in dollars over the last 10 years, since the last time it reached an all-time high (2011). 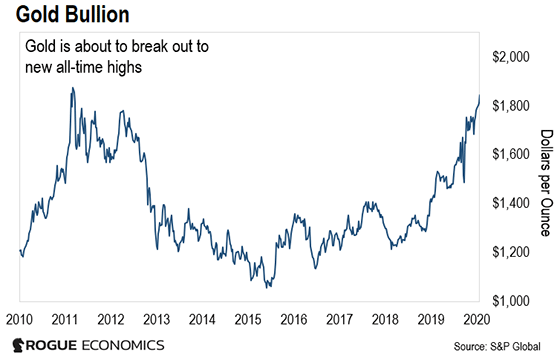 As you can see, gold has been in a giant correction these last 10 years, falling as much as 44%. But that correction is about to be history.

Why is gold rising?

This is textbook behavior of a degenerate government clinging to power by spending wealth it doesn’t have (most commonly seen in corrupt banana republics).

It debases the currency with printed currency units until there’s a currency crisis.

Meanwhile, investors in the U.S. government’s currency (anyone who owns a bond, a money market, a CD, or a savings account to be repaid in dollars) are receiving the lowest interest rates in 400 years of American history.

How will they react when their dollars start losing their purchasing power, in addition to not paying any interest, because the currency units are being debased?

They’ll buy gold and silver, of course, which is effectively just a risk-free, zero coupon, perpetual bond that redeems in any currency the holder wishes to redeem it in.

No. 1 Asset Class in the World

For the last two years, we have implored everyone we’ve come across – friends, family, strangers we’ve met on our travels, readers of these Postcards – to buy gold and silver.

…that the U.S. government is broke, and the Federal Reserve will do whatever it takes to help the Treasury meet its obligations. That includes debasing the currency.

If you still don’t believe that, take a look at this next chart… 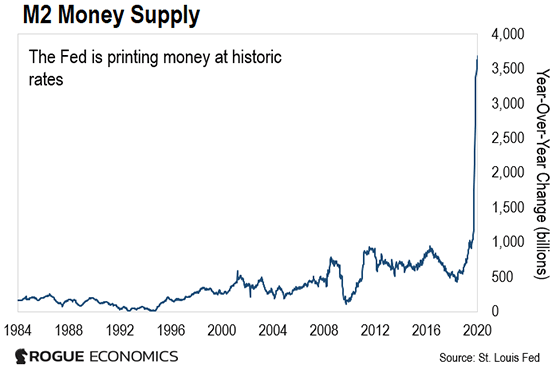 It’s no surprise then that, so far this year, gold and silver mining stocks are the number one performing asset class in the world. Unlike the U.S. dollar, the government can’t just “print up” gold and silver.

There is around $350 trillion of global financial assets (most of these directly or indirectly tied to dollars). Tradeable gold and equities total $2.9 trillion, or 0.8%, of financial assets.

When the world seeks to rebalance from financial assets into hard assets, there’ll be a stampede.

My next price target for gold remains at $10,000 an ounce (over the next five to 10 years). I remain bullish, fully invested, and without any desire to “time” or “trade” the market.

P.S. The next five to 10 years are going to be a fantastic time to be a “fringe” investor, just as the 1970s were. I don’t want to miss it. That’s why I created a long-term strategy to capture this opportunity… and invested nearly $1 million of my own money into it. Now, I want to help others get on the right side of this trend, too. I explain it all in this video presentation – including how to get access to the 11 gold stock names with the potential to 5x-10x your money…

The fast food controversy continues, after Tom said he may soon “only eat fast food”…

Reader comment: Tom, ditch the fast food route. I did 40 years ago. Now, it’s Taco Bell, and KFC on rare occasions. Don’t know if my restrictions contributed to it, but I’m 92 and love my great grandchildren.

Reader comment: Your kids will love what’s in store for them, the Grand Tetons, Mt. Rushmore, the Badlands, and hopefully Utah’s amazing canyons. Of course, the Grand Canyon should be in your navigator’s queue. All the best from Moscow, Russia.

Reader comment: Hello Tom, I am enjoying your Postcards. Today’s postcard reminds me of a night my family spent in a tent trailer at a campground in Wall, S.D. (just outside the Badlands). The wind howled and rocked the tent trailer all night. There is a drug store in Wall that grew by purchasing adjacent stores. It has some unique things in the store (or did 30 years ago when we camped there). Safe travels.

Tom’s response: We had breakfast at that drug store. It’s called Wall Drug and it’s amazing. Iconic, really. Hard to describe, other than it’s a gigantic museum/restaurant/drugstore/playground all under one roof. It even has its own map to help customers navigate their way around. All in a tiny, desolate, western town called Wall. The story of its founding is pretty cool, too, especially if you believe in God.

Reader comment: Tom, I really enjoy your Postcards. Thanks for sharing. Please be very careful while in the Badlands and watch out for rattlesnakes, particularly at night. I was there about 60 years ago on a camping trip. We pulled into the Badlands late in the evening and set up camp quickly, and went right to bed as we had been traveling all day. As we usually did, we slept in sleeping bags on the ground.

In the morning when we awoke, we were speaking to a couple who were positioned right next to us in a motorhome who were frequent visitors to the Badlands. They asked where we had slept. When we told them we had slept on the ground outdoors, they were shocked and told us how lucky we had been. They stated that, at night, the place was swimming in rattlesnakes out on the prowl. So be extra careful while you are there. Once again, thanks for sharing your adventures. Safe journey and happy trails.

Reader comment: Hey Tom and family, I was in that part of South Dakota (Badlands, Custer State Park, The Black Hills etc.) 40 years ago and remember it well. Truly a unique place. First and only time I had seen a giant herd of Bison; there were hundreds and hundreds of them.

Early prospectors found gold deposits in those Black Hills and it became a famous mining location, as you most likely already know. Means you’re getting closer to visiting Mt. Rushmore (maybe you’re already there by the time you get this note). I love that place!

Pay attention to the series of three tunnels you will pass through on your way to the look-out points. If I remember the experience correctly, as you approach each tunnel, the four faces of the monument are lined up so you can see them as you enter each one. The heads are small and far away as you enter the first tunnel; they are bigger by the time you get to the second one, and they take up the entire tunnel opening upon your passage through the third one.

I’ve been reading your Postcards for two years now and like everyone else who writes, always look forward to reading the next one that’s deposited into my inbox. And you have a beautiful family!

Tom’s response: Thanks for the kind and supportive words! I didn’t experience the three tunnels leading to Rushmore as you described. Maybe we took a different road? As I described yesterday, I was a bit nonplussed by Rushmore.

Reader comment: Hello Tom, It was interesting to hear you were in Valentine, Nebraska, as my aunt and uncle have a small cattle ranch there. I am curious as to your thoughts of the “social unrest” the news media hypes. I don’t watch or read too much news, but did find it unusual that there were protests nationwide. There were even protests in smaller towns in Nebraska, which I had never experienced before. I hope to meet you again someday. Safe travels and God bless your family!

Tom’s response: I’m not surprised. The political and financial environment is making people desperate and angry. The media then stirs it all up. I’d be more surprised if there wasn’t social unrest.

As always, please keep writing us at [email protected]. Kate and I read every message you send us, and I’ll do my best to address your questions and comments in a future postcard.