What propelled London to become the preeminent global financial center outside the U.S.?

A) London’s convenient location between New York and the rest of Europe?

B) A holdover from having the world’s reserve currency in the 19th century?

C) Because the Brits are really good at mathematics?

D) Because American banks, encouraged by the British government, used London to avoid banking regulations in the U.S. after Bretton Woods?

I’ve learned that there exists a giant, obscure, globe-spanning, totally unregulated financial system, a system that is invisible to most people – including, unbelievably, the people in charge of the Federal Reserve.

It’s a phantom network where trillions of dollars trade EVERY DAY and upon which global trade settlements rest. It’s far larger than the U.S. banking system, for example.

This network spawned in London during the 1950s. Today, there are many important nodes, including Zurich, Frankfurt, Toronto, Tokyo, and Hong Kong.

The currents in this market are the drivers of everything big that happens in global financial markets.

Subprime mortgages did not cause the 2008 global financial crisis. A sudden deflation in this market did.

Fed Chairman Alan Greenspan did not know what he was doing. He only appeared to be a “maestro” because of massive trading growth in this market in the 1990s and 2000s.

One glimpse at recent trends in this market explains why four bouts of quantitative easing (QE) have failed to stimulate meaningful economic growth.

I’m talking about the eurodollar market. By its narrowest definition, a eurodollar is a dollar that exists and circulates outside the U.S.

Over the last 70 years, the eurodollar market has experienced a massive fractional reserve banking credit expansion. Banks all over the world trade trillions of them among each other. There are no armored cars filled with cash or vaults filled with gold backing this trading. It’s entirely based on interbank ledger entries.

This trade is what propelled London to become a huge financial center when U.S. banks opened subsidiaries in the 1950s and 1960s to trade eurodollars.

In the dying days of the British Empire (the fifties and sixties) the English wished to hold onto something. Having established a banking empire as robust if not more so than its political equivalent, why not keep the monetary center of the universe in the UK’s capital city?

If sterling wouldn’t be acceptable, and it increasingly wasn’t after the Suez debacle, London could trade in dollars. To attract capacity, British regulatory authorities simply decreed that any bank setting up shop in the City of London (a separate zone within London) would be exempt from most if not all banking regulations so long as their customers were not British citizens.

Crucially, these dollars never come to the U.S. They’re not subject to U.S. banking regulations. They don’t show up in the Federal Reserve bookkeeping system.

Even more crucially, banks use them to get around regulations and leverage themselves to the max with derivatives.

Because this is an offshore market, it is beyond the control and influence of the Federal Reserve. As such, the Fed’s efforts to stimulate the economy and create growth have not reached the eurodollar system.

It has been contracting since 2007, and this contraction has been especially acute over the last 12 months. If I’m reading this right, we are heading into another slow period for economic growth… maybe even a recession. Stay tuned for further updates…

In the meantime, we check in on our trade.

Remember, last year, I invested my entire life savings in the hopes of profiting from a decline in the Dow-to-Gold ratio.

But six weeks ago, I met Bill Bonner and Dan Denning in London, and they asked me to share my Dow-to-Gold ratio trade with readers, which I did last month. The model million-dollar portfolio I set up to track the trade is now worth $1,113,500.

P.S. “I love following your trip, but I feel a little for the kids…”

Yes, this trip is hard on the kids sometimes. They don’t have toys or friends to play with. They exist in unfamiliar places surrounded by unfamiliar people. They eat unfamiliar food, which is often spicy. Penny (who’s six) seems to get sick quite frequently, too.

But they love exploring the new hotels and Airbnbs we stay at. We give them plenty of time to play on their iPads. We have lots of quality family time. They seem happy, and they rarely complain.

We’re in Mysore, staying at a hotel that used to be a palace. We’re the only guests. We check out later today and travel to Bangalore by train. Here we are having dinner last night. 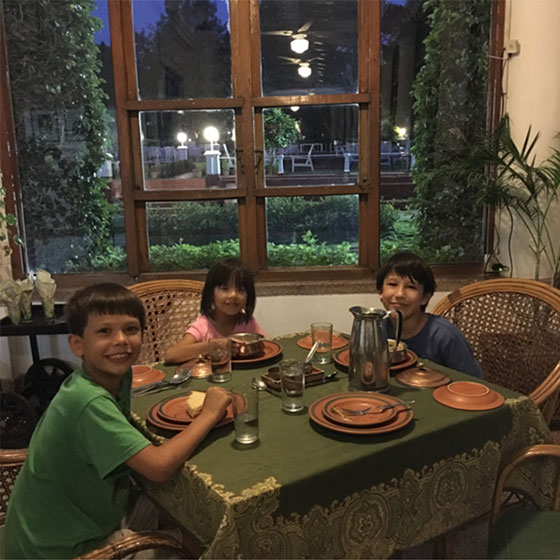 Tom and family at dinner

We’re living an extraordinary life in India, hopping from town to town with our little suitcase, eating incredible food, and spending money however we want because India is so cheap. These are special times for us.

Here we are eating something called pani puri… 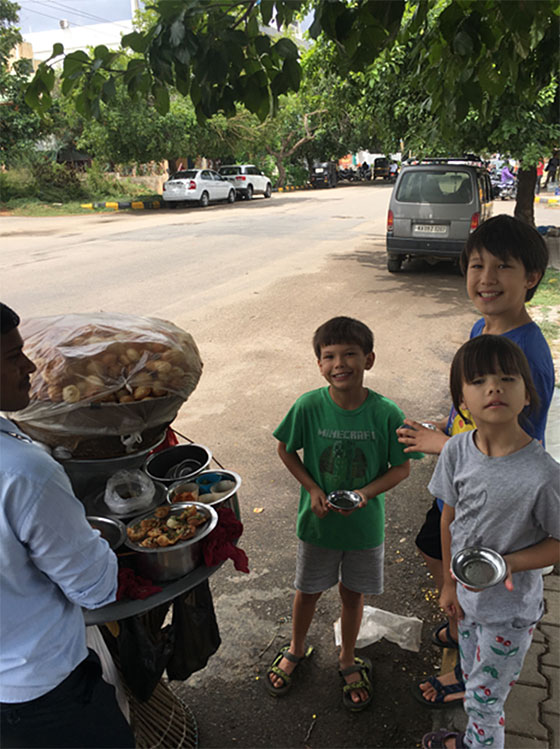