WEST PALM BEACH, FLORIDA – All my work and research over the last year can be boiled down to one singular prediction: The Federal Reserve’s balance sheet is about to EXPLODE higher…

The latest numbers are out. (More below.)

Kate and I have been homeschooling our kids for years. Audible, by Amazon, is one of our favorite resources.

Our children have passed many a long bus and train ride across foreign countries listening to books on tape from Audible, including the entire Harry Potter series and the entire Rick Riordan bibliography.

Because of school closures, Audible has opened its catalogue this weekend. Kids can instantly stream an incredible collection of stories, including titles across six different languages.

All stories are free to stream on your desktop, laptop, phone, or tablet. All free. No sign ups. No commitments. Just free audiobooks for kids. Just click this link and start listening…

If you – or anyone you know – is having to homeschool children this week because their schools have closed, perhaps you’ll find this offer from Audible interesting.

(I’ll post more of our favorite homeschool resources every day. Catch up on last week’s here.)

At the beginning of the year, before anyone in America had heard of coronavirus, the U.S. government found itself in the most precarious financial position it had ever been in.

It had $23 trillion in debt, ran a budget deficit of more than a trillion dollars a year, and it mostly financed itself with short-term debt, which is a lot less secure than long-term debt.

And it found itself in this position after 10 years of an economic expansion and soaring stock markets.

The government’s gargantuan demand for cash had been weighing heavily on the public markets for more than a year.

I used to work for the “repo” (short-term loans) desk at Citigroup. So when I started studying the markets again in 2018 after my two-year sabbatical, it was the first thing I noticed. “The plumbing beneath the banking system is blocked,” I wrote.

The cause: Enormous amounts of cash the government was soaking up and the inability of the banking system to meet its appetite.

As I warned many times last summer, if they didn’t unblock the money markets things would “start blowing up.”

Things blew up on September 17, 2019 when the interest rate on short-term loans spiked from 2% to 10% in a matter of minutes. The Fed turned on its printing press and began bailing out the government. It couldn’t let the government collapse financially.

That was the moment I was sure we were about to get inflation.

When I considered the government’s obscene consumption of cash, its inability to fund itself in the public markets, the Fed’s willingness to bail it out, and the likelihood of a coming recession – even though I had no advance knowledge of a pandemic – it was clear to me the Fed’s balance sheet would grow by trillions and trillions of dollars over the next few years.

Look at this chart. It shows the latest picture of the Fed’s balance sheet. It’s started to hyperinflate… 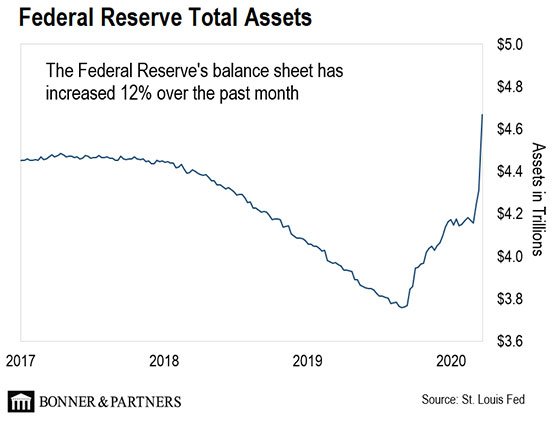 Of course, the coronavirus outbreak has been the trigger for this hyperinflation.

The economy has all but shut down, the markets are crashing, companies are going bankrupt, people are losing their jobs, and the credit markets are jammed up.

To soften the blow, the federal government is about to begin sending cash to every American, upping social benefits and cutting taxes.

Current estimates put the cost of this stimulus at $2 trillion. I reckon it’ll end up being far higher… especially when the Treasury begins bailing out corporations.

This is in addition to the three monstrous financial obligations the U.S. government already has anyway… to Baby boomers, to the military budget, and to foreign creditors.

Meanwhile, its tax revenues are about to plummet because its revenues are tightly connected to the economy and stock market.

The bottom line is, this recession and bear market we’ve just entered is about to BLOW A HOLE in the government’s already-stretched finances.

From my reading, I reckon this hole could easily reach $10 trillion.

That means the government is going to have to borrow $10 trillion on top of the $23 trillion it already owes creditors… and the $1 trillion deficit it was already running each year.

This is happening at a time when:

The ONLY way the government will be able to finance these spending plans – and avert a hard-screeching bankruptcy – is if the Fed monetizes its debt.

And that’s why the Fed’s balance sheet has started to hyperinflate.

It’s at $4.5 trillion now. If I’m right about the hole the government finds itself in right now, the Fed’s balance sheet will pass $10 trillion later this year… and then pass $20 trillion or $30 trillion in the next few years.

It’s inevitable. (This morning, the Fed announced a new, open-ended program to print as much money as it needs.)

How will they maintain confidence in the U.S. dollar during this hyperinflation? There’s only one way, in my opinion. They must revalue the price of gold on the Fed’s balance sheet…

More on this tomorrow.

P.S. We must watch the dollar. The dollar is the key “battlefield” in the government’s campaign to “fix” the crisis. Right now, it’s super-spiking. The Mexican peso sank 10% last week. The Russian ruble fell 9%. Many currencies dropped more than 7%.

A vertical dollar means the government and the Fed are losing. It means the system is insolvent, deflation is winning, and the whole world is plunging into a great depression. Another way of interpreting a rising dollar is that the Fed hasn’t thrown enough money at the problem.

P.P.S. A spiking dollar is something you’d expect to see right before hyperinflation begins… or a government collapse. So is hoarding of physical precious metals. Just sayin’.

Today, readers ask Tom about gold and inflation… and commend him for his Postcards…

Reader comment: Just recently discovered Tom’s Postcards. I’m 70, but better late than never. I’ve invested in stocks for many years but never in gold or silver. Where do I start? Could you provide a link or reference to articles I should review please? Thank you for your insights.

Reader question: You keep saying we’re heading into inflationary times (good for gold), however with the COVID-19 situation, just about every Tom (not you), Dick, and Harry is crying out “deflation,” which will bring lower gold prices. Any comment would be appreciated. All the best to you and your family.

Tom’s response: Deflation now. Inflation soon. Gold prices are beating just about every other asset in the markets, except for U.S. dollar cash and bonds. And besides, the price of physical gold is now much higher than spot gold.

However, to answer your question, gold will start rising faster than dollars as soon as this super spike ends… and the Fed prints enough fake money to paper over the deflation. They’re trying. They just need to try harder.

Reader comment: Loved your letters from your time traveling and your insights into global financial mismanagement by most nations. As a UK resident, how will I benefit if gold appreciates at the expense of the dollar? There must be many of your non-U.S. readers asking the same question.

Tom’s response: Don’t think of gold’s appreciation in terms of the dollar. It’s getting revalued in terms of all currencies and everything.

I call this the “global synchronised currency devaluation.” The only way you’ll benefit is if you own gold.

Side note: I expect the dollar to be the strongest of all the paper currencies, so we’ll have the unusual situation of both gold and the dollar rising. Due to this dollar strength, I expect the pound to go to parity, something I’ve been waiting for for years.

Reader comment: I would like to thank Tom Dyson for posting the homeschooling websites he likes. That was kind and thoughtful for the families stuck at home!

Reader comment: You are absolutely, utterly, and completely wrong about your work communicating with your readers being “a little superficial.” The humanity and cool sanity you bring to this terrible situation is something businesses and other organizations are utterly incapable of providing.

Without it, many of us might well be running around the streets like Chicken Little, shouting, “The sky is falling! The sky is falling!” Signing off at this point would not only not go unnoticed, but would be devastating to many people who find the personal touch you bring one of the few things that help people make it through the days.

Reader comment: Just wanted to take a minute to express my appreciation of your work. I am sure it won’t go to press, but I hope it will at least reach your eyes. I guess I am waiting when you will turn into a sell-out. Everyone needs to make money. But I hope it won’t happen too soon and you will remain sincere for awhile.

Tom’s note: Thank you for your kind messages! Kate and I read every one. Please keep writing us at [email protected].