NANNING, CHINA – We just arrived in Nanning, China after a 12-hour overland journey from Hanoi.

We took a bus from Hanoi to the border. Crossed the border on foot. And then rode two buses to get to Nanning.

Nanning is a huge city of 7 million people and hundreds of skyscrapers. But it’s only the 34th-largest city in China!

I’m writing to you from our youth hostel ($25 a night). We’re in an eight-bed dorm. I’m on the bottom bunk…

On the China side, you immediately notice how clean and modern it is compared to Vietnam. On the Vietnamese side, the road to the border is a winding two-lane highway. On the Chinese side, it’s a modern four-lane motorway that doesn’t have a single pothole or bump.

This area is famous for its Karst formations and green fields

The weird thing was how little traffic there was. Even at 6 p.m. on a weekday entering a city of 7 million people. The bus motored straight into the bus terminal with hardly a tap on the brakes.

There’s a major construction boom here too. I saw railroads, bridges, roads, and tunnels under construction and lots and lots of high-rise apartment buildings being erected in big, ugly clumps of identical buildings on both sides of the road.

The only other place we’ve seen on our travels with so much construction was Istanbul.

The other thing I noticed were the cameras. They’re everywhere.

There were two on the bus. There were hundreds of them in the immigration hall. They were in the subway. And we even saw them over the highway every few miles. They flashed whenever a car or truck passed underneath. There’s a camera looking over our hostel common area too.

The locals seem to be incredibly friendly and hospitable. A man bought our subway tickets for us after he saw us failing to get cash from the ATM. Then he walked down to the platform and made sure we got on the right train…

Tom with family and their new friend in China

When we got off the subway, another man used his phone to make a phone call for us and then walked us over to the meeting point…

And the manager of our hostel took us to a restaurant, helped us order, then waited at another table while we ate. Then, he took me to the train station and helped me buy tickets for Saturday. He gave up two hours of his time to help us!

Meantime, over in the world of finance…

Gold has moved into a downtrend, while the stock market has been in an uptrend. The Dow-to-Gold ratio has moved up. It’s at 17.90 today.

“Isn’t that bad?” asked my son Dusty this morning.

In the past, I tended to take profits too quickly, and this correction might’ve shaken me out. This time I’m holding my gold position “come hell or high water.” (Or at least until I hit my stop-loss or take-profits points.)

P.S. I love this chart. It shows the price history of gold adjusted for inflation. The main point I take away from this chart is that – on a real basis – gold is still far below the peak it hit in 1980. It implies there’s still a lot of upside. 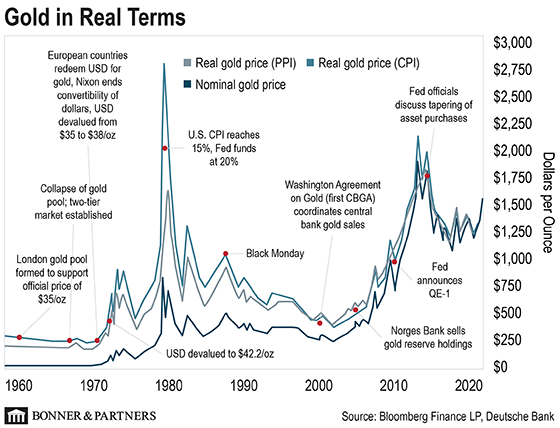 Reader comment: Finally someone tells me exactly when to sell gold. I will keep in mind the Dow-to-Gold ratio equal to 5. Thanks!

Reader comment: I enjoy your thoughts on gold. I also enjoy your wandering and tales. I’m a touch older [in my 80s], but still enjoy travel. Wish you well on your travels and adventures!