WASHBURN, WISCONSIN – This chart shows the price of gold in U.S. dollars going back to 1990… 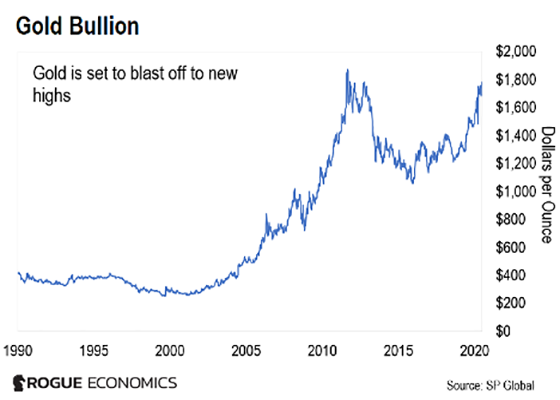 As you can see, gold is on the cusp of making record highs and – in my opinion – blasting off to new levels far above today’s prices. We’ll see.

But today, it’s the year 2000 I want to talk about… the year gold first started to rise… (More below.)

Seven weeks ago, my family and I set off to explore America with a car, a tent, some sleeping bags, and a camp stove.

We’ve been living in campgrounds, barns, driveways, parking lots, and backyards ever since. We live off fast food and mac and cheese, we wash in public bathrooms, and we spend a lot of time cruising along country roads listening to science fiction books…

Tonight, we’re in a great spot. We’re in northern Wisconsin, on the shore of Lake Superior, at a campground.

There’s a beach and a playground here. There are lots of kids. And it’s quiet and roomy. We’ve got our favorite spot right by the bathroom. We’re paying $27 a night.

We’ll stay here another night and then head southwest to our next stop… somewhere in central Wisconsin. 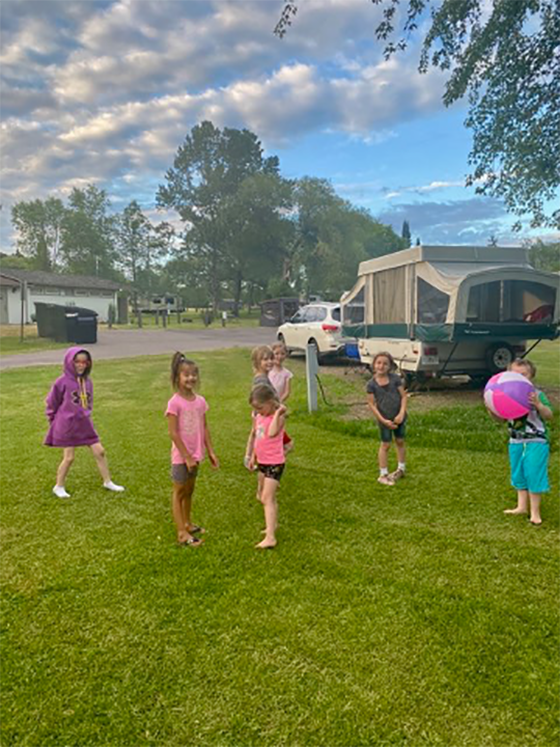 Penny (second from left) and friends

Best Days Ahead for Gold

Through my reading and studies of economics, it seems to me that the year 2000 marked an extremely important turning point in American economic history.

It marked the peak of U.S. GDP growth…

…the peak of the technology and new economy boom…

…the peak in household income of the baby boomer generation…

…and the moment when Alan Greenspan – Federal Reserve chairman at the time – launched the idea that the central bank would “do whatever it takes” to support Wall Street and keep the stock market inflated.

(The Fed had been tinkering with interest rates long before the year 2000. But in my opinion, 2000-2003 was when the idea of ultra-interventionalist central bank policy came to the forefront. And that’s when the seeds of massive money printing were sown.)

Is it any coincidence that 2000 was the year gold started rising?

I don’t think so.

And if it’s not a coincidence, it’s reasonable to expect gold will keep rising until the central bank money-printing programs, and intervention, have been completely discredited.

It’s getting closer… but it’s still a long way off. That’s why I’m confident gold still has its best days ahead of it…

P.S. On Monday, I sent you the first video of our American road trip. Here’s the second one (Penny shares the mic with Miles and Dusty this time)…

Reader comment: I’ve spent months – well, totaling years since I’ve been doing this for decades – living in a European motorhome/compact EV [electric vehicle] and occasionally had robbery attempts. I love what you’re doing, which will be great for your kids too, but I wonder as you travel interstate how the law is regarding weapons?

We’re considering flying into the U.S., buying an RV and traveling for 80 days, then either selling it or shipping it to Europe. But we’re concerned about personal protection en route. Any recommendations?

Tom’s response: I sometimes worry about our safety too. (Ironic, as we’re traveling in the world’s richest, most expensive country.) We stick to campgrounds and places where there are plenty of other people around us. So far, we haven’t felt insecure at all.

Every state has different gun laws, so it’s a bit of a minefield to navigate. Also, I believe you have to be an American citizen or Green Card holder to buy a gun (with some exceptions).

Reader comment: Your reader’s description of burying gold in PVC pipes with end caps could not have been more timely. Just last weekend while packing up a U-Haul to move, I had to remind my sister to dig up the gold she had buried, on my recommendation, using this technique some years ago.

My grandfather passed down several (I won’t specify how many here) Gold Eagles he bought back when Nixon took us off the gold standard. I told my sister not to forget to take her favorite goldenrod plant with her. She gasped in recollection.

Moral of the story… always tell at least one trusted family member where you buried it!

Tom’s note: Thanks for writing in! As always, please keep sending us your questions and comments at [email protected].