LONDON, ENGLAND – This chart shows recessions in the United States over the past 120 years… 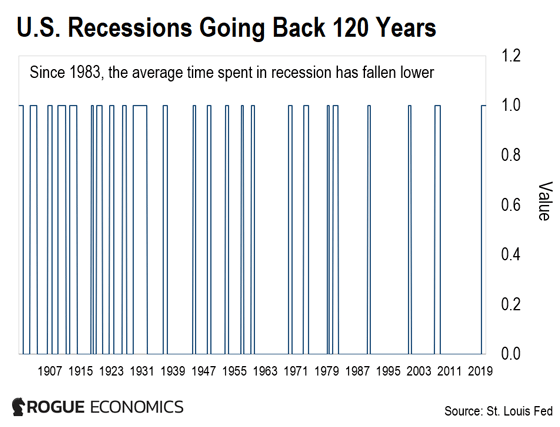 And since 1983, the average time spent in recession has fallen even lower.

Is spending so little time in recession the “new normal”? Or are recessions more like buses, meaning you don’t get one for a while… and then three come along at the same time?

My family and I are a traveling family. We blow from place to place, like leaves in the wind, living out of a suitcase, homeschooling our three kids, and having adventures however we can…

We’re currently in London, trying to make the most of this vast and ancient city by looking at art and architecture, learning about history, and meeting up with as many locals as we can. (We crave community because we’ve been traveling so long.)

Here we are at the Museum of the Home, which was especially relevant to us as it explores the meaning of “home” and “community.”

Dusty, Penny, and Miles in London’s Museum of the Home

With us are Postcards readers Rick and Cindy, who thought we’d appreciate the museum and offered to take us on a tour of it. We loved it.

On Friday, we visited the Tate Modern museum of modern art. Here’s Miles (11) looking at an exhibit hanging from the ceiling…

Miles admires an exhibit hanging from the ceiling

The kids study the Babel installation at the Tate

It’s hard work visiting museums as a family. There were two casualties on the subway home this day…

Kate and Penny sleep on the subway after a long day

Waiting in the Sidelines in Gold

Turning back to recessions, consider this…

The U.S. debt is at 130% of GDP (the highest it’s ever been), the government is running budget deficits of $1 trillion a year, and there are $100 trillion in unfunded future liabilities.

Interest rates are at zero percent, the Federal Reserve is spending $120 billion a month in quantitative easing (QE), and inflation is stirring (up 5% since last year).

Meanwhile, stocks and bonds are at their highest valuations in history, and foreigners are refusing to buy as many Treasuries as they used to.

With these things in mind, I’m betting we’ll spend a higher percentage of the time in recession over the next 10 years than we have over the last 30 years.

We’re currently in a recession that started in February 2020 and hasn’t ended yet. (Note: The National Bureau of Economic Research decides when the U.S. is in a recession and when it’s not.)

I’m expecting at least two more recessions over the next decade.

What are the investment implications of this?

Well, I don’t want to be an investor at all. We want to sit on the sidelines in gold until the danger has passed, the world’s economy has re-balanced, and stocks and bonds aren’t trading at the highest valuations in history.

We monitor the situation by watching the Dow-to-Gold ratio. It shows the Dow Jones Index priced in gold. And it’s the gauge I use to tell whether the world economy is in balance… or not. 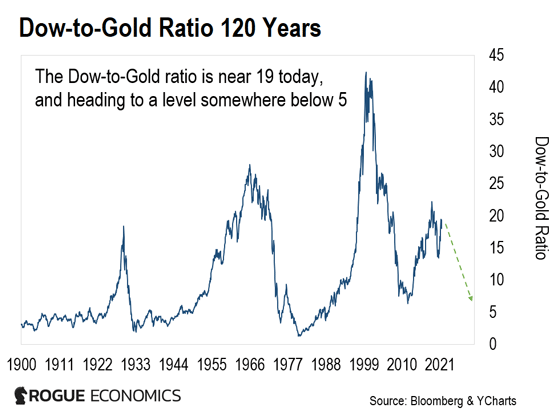 Right now, the Dow-to-Gold ratio is near 19, as you can see in the chart above.

As the current recession ends and two or more recessions pass through over the next 10 years or so, the Dow-to-Gold ratio should go below 5.

P.S. This is precisely the reason why I’m waiting on the sidelines in gold, for, I expect, the next five to 10 years… To keep our wealth out of harm’s way. If you’d like to join me, my paid service, Tom’s Portfolio, will help you step-by-step. Watch this video to learn more…

Reader comment: It is a pleasure to share your adventurous life. Sharing your decisions take courage! Thank you!

Reader comment: We didn’t homeschool our children whilst we were in the U.K., they were in an international high school. Interestingly, our daughter, who started high school in the U.K., said she always wanted to experience a “real American high school.” Be careful what you wish for!

We relocated back to the States when she started her final (senior) year in the U.S. system in a “real American high school.” So she was able to experience all the cliques, fighting for placement, and the challenge of being the new kid in a settled environment. We were in a suburb of D.C., on the Virginia side with a great school, if you were able to get into the right courses.

She did well eventually, but I remember clearly her being confused by talented and monied peers in the U.S. capital not having a well-developed sense of the world outside of their particular bit of suburb. At one point, she remarked that her intelligent colleagues seemed so parochial to her – this was after living in the U.K. and regular trips to “the continent” for competitions and summer vacations.

So, bottom line: Keep up the homeschool you are doing with the children. Check out London Walks if they are still going for amazing guided tours to parts of London rarely seen by the average tourist.

Reader comment: The teachers in schools around London, would not be able to do what you are! There is a large percentage of residents in and around London who have never done what you are doing with your children. A fantastic opportunity to do so, you are doing it. I could not recommend it enough to you both! Carry on!

Never mind all those people who write in and suggest that your children may be less well-rounded than school kids are! How dare they say they may end up underprivileged because they are not schooling amongst the “elite”! Absolute nonsense!

Tom’s note: Thank you for sharing your thoughts with us. We always appreciate your support and encouragement! Please keep writing us at [email protected], and I’ll do my best to answer your questions in future Friday mailbag editions.