This might not sound like a big deal, but we haven’t met a local who speaks English (more than a few words) since we arrived in China three weeks ago.

What’s more, Jessica is a property investor, a stock market investor, and a small business owner. We spent the day with her. I was able to ask her all the economics questions about China I’ve been dying to ask…

In the Center of China

My family and I are traveling the world by public transport, staying in cheap backpacker hostels, and living out of a suitcase. So far, we’ve crossed America, Europe, Africa, the Middle East, India, and Southeast Asia. We’re now more or less in the center of China, in a region called Qinghai.

We’re staying in a bunk-bed hostel on the 25th floor of a high-rise apartment building in the city of Xining. Beds here cost $7 a night. We’ll be here two more nights. Then we’ll head to the train station.

Today, we went on a tour to China’s biggest lake, called Qinghai Lake. Here we are… 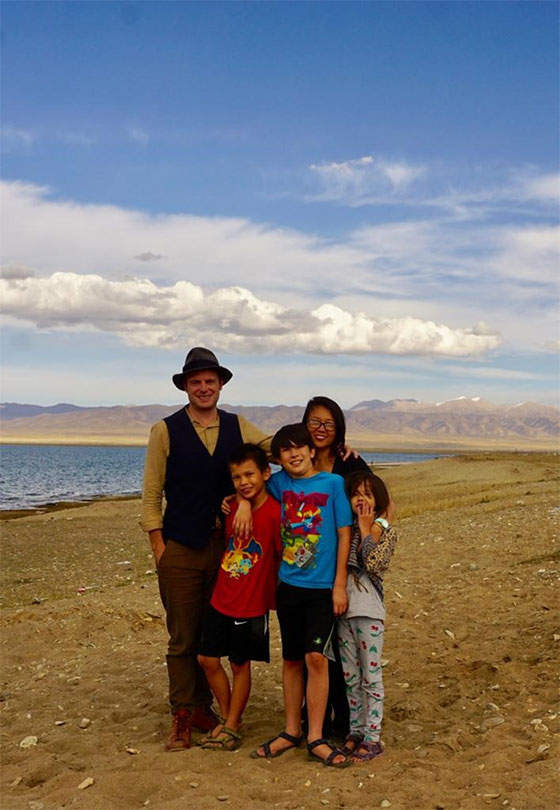 With Kate and the kids at China’s biggest lake

Jessica was on our tour bus. I asked her about apartment prices…

“I paid $80 per square foot for my apartment in 2009,” she said. “It’s a small apartment in Xi’an [a giant capital city in central China]. We bought it when we were poor. Now we have money; we want a bigger apartment. Its price has doubled in the last three years. I’m about to sell it for $240 per square foot.”

She added, “I also have an apartment in Dunhuang [a small regional city in northwestern China]. Property is much cheaper there, but prices are rising even faster.”

“What about prices of basics, like food and clothes? Do they rise, too?”

“Yes,” she said. “Not as fast as property, but things get more expensive every year.”

“What about gold? Do you like investing in gold?”

“What about bitcoin?” I asked her.

“Other than mortgages, do people here borrow money and use credit? I see people doing a lot of shopping.”

“Yes, we have credit cards, and we use them all the time. But I always pay my balance. If you don’t pay, they charge interest. If you still don’t pay, they take away your privileges, like buying plane tickets or train tickets or hotel rooms. Older generations didn’t use credit. But younger generations don’t worry about the future so much, and they borrow a lot more.”

“Last question. How do you feel about Americans?”

“We think Americans are very kind people. The trade war is political and means nothing to how we feel about American people.”

P.S. Tuesday was the 70th anniversary of the Communist Party’s takeover. Here in Xining, we didn’t see any evidence of this. No fireworks, no parties, no celebrations, no flag-waving, no nationalism at all…

P.P.S. I think I convinced Jessica to buy some gold. “Your government is buying hundreds of tons of gold, more than anyone else,” I told her. “All the major governments want to devalue their currencies, but the yuan is particularly overvalued. Buying gold with RMB [renminbi, China’s official currency] is the greatest trade in the world.”

“Are you sure gold will rise?”

Reader question: Are you at all concerned that because the value of the market has been (/continues to be) to be propped up that the Dow-to-Gold ratio will return to 5 and you could still be purchasing stocks that are overpriced?

Tom’s response: Great question. No, because for the Dow-to-Gold ratio to return to 5, there has to be a big down leg in stock market valuations – what I call the “valuations bear market.”

But let’s say it doesn’t happen like that for the first time in history. I’ll still be getting 4x the number of shares than I would buying at a Dow-to-Gold ratio of 20. Even if they are still overvalued, that’s a great margin of safety.

Finally, it’s a weird phenomenon, but at market peaks, you often see low P/E (price-to-earnings) ratios as the “P” falls but the “E” remains high. Likewise, at market bottoms, “E” can fall so far that P/Es can appear to be high. This is why I track only those 10-year rolling P/E ratios that smooth out the peaks and troughs in earnings.

(As a reminder, P/E ratios measure how much investors are paying for every $1 of a company’s earnings.)

Reader question: Your story sounds very interesting. Your logic on gold sounds correct. I live in England (of which country I am becoming increasingly ashamed… we have a near-fascist, nonfunctioning government and a “popular” press and 17.4 million people who are either ignorant or don’t give a jot about peace in Ireland or the Scots or the Welsh or the future of the country), so I would like to know of a safe place to store gold. I have a few gold and silver coins that are hidden, but I don’t know where I could safely store a substantial amount. Any ideas?

Tom’s response: Tough question. One I haven’t got a perfect solution for. Buy a safe and keep the coins on your property? (Don’t tell anyone.) Or rent a security box at the bank? Or try one of the custodian services? Unfortunately, I think there’ll always be an element of “hide and hope” in physical gold investing.

Tom’s response: I love silver, too, and put a big chunk of our savings into it. I see silver as a more aggressive version of gold. It’ll probably generate better returns in the long run but be a wilder ride getting there.

Reader comment: I totally agree with you on the advantage of owning physical gold – hard to get rid of. I, too, put a significant portion of my assets to physical gold (coins) three years ago. I am stuck with it because it is so hard and inconvenient to organize , box, and send out the coins to sell them. This is exactly what I needed – being stuck with my asset. How funny, but it is so true.

Reader comment: My personal feeling is that there is likely to be a lot of turmoil in the world in your young children’s lifetime, and an alternative education is much more likely to equip them for whatever comes along. I always tell people that you have to work for an almighty long time. There’s no rush to start.

Reader comment: Read your note on depression and your misgivings on discussing it in your postcards. As someone who has faced a significant illness, I say “bunk” to those who said you should have skipped it. It is a part of you and probably played a part in who you are today. Besides, openly discussing depression can never hurt, and may help someone struggling with this disease. Keep the cards and letters coming.

Reader comment: Please continue to share about your depression. I lost my good friend and ex-husband to suicide just over eight years ago. You’ve regained your zest for life, the love of Kate, and an amazing relationship with your children. What else could be better than that?!

Tom’s note:  Please keep sending us your feedback at [email protected]. Kate and I read all your messages, even if I publish only shortened versions of them. We find them so encouraging and comforting. Also, your comments are an integral part of this project. I will continue publishing as many of them as I can. (But don’t worry… I will never reveal your identity or publish any potentially identifying details from your message.)