Amid fraud, corruption, and arrogance, that collapse wiped out millions of investors and billions of dollars overnight.

My mom was one of the investors caught in the bigger contagion that followed.

I was a managing director at Goldman Sachs at the time.

By that point, I’d spent nearly 15 years on Wall Street. And for years, I’d been fighting losing battles against greed and corruption.

What I didn’t know was that my mom was about to fall victim to that same corruption I’d been fighting… and would lose nearly half her retirement savings.

The reason I’m telling you this is that her story has implications for your money today.

See, when I walked away from my million-dollar career on Wall Street, I vowed to help ordinary Americans avoid similar collapses. And to show them how to profit, despite the volatility in the markets.

And we now face a similar distortion. Except this time, it could be 100 times bigger than the contagion that cost my mom half her retirement savings.

I call it “Enron 2.0.” And it will impact every man, woman, and child in America.

I hope you’ll join me. Because I’m going to show you how I plan to get revenge on Wall Street.

Plus, I’m going to unveil a new strategy that could give you the chance to make as much as 1,000% gains as this historic distortion unfolds.

Just go here to get on the list… and tune in at 8 p.m. tonight for all the details.

Until then, I want to tell you my mom’s story – and show you why it’s so important that you prepare for what’s coming.

My Mom and WorldCom

My mom is a smart, independent person. So when she decided to invest her retirement funds with a brokerage firm called Smith Barney, she didn’t ask for my opinion.

Smith Barney was a prestigious institution. Its history went all the way back to 1873.

You may even recall its motto from a TV commercial in the 1980s. In it, actor John Houseman said:

They make money the old-fashioned way. They earn it.

All that was before a telecom company called WorldCom went bankrupt on July 21, 2002. And not quietly either.

I chronicled the rise and fall of WorldCom in my first book, Other People’s Money. It’s a twisted story.

This was the biggest corporate bankruptcy in U.S. history. WorldCom had assets of $107 billion at the time.

In its wake, WorldCom left a cesspool of $11 billion in accounting fraud.

Its former banks – including Citigroup, Bank of America, and J.P. Morgan – settled lawsuits with creditors for $6 billion.

And its CEO, Bernie Ebbers, served nearly 14 years in jail.

First, it bought a lot of other firms after the Clinton Administration passed the Telecommunications Act of 1996. WorldCom’s stock rose from $16.50 to a peak of $62.30 in September 1999.

This was even as its stock was bucking and it was announcing large accounting revisions. His name was Jack Grubman.

And third, WorldCom’s stock began plummeting into bankruptcy, as you can see in the chart below. 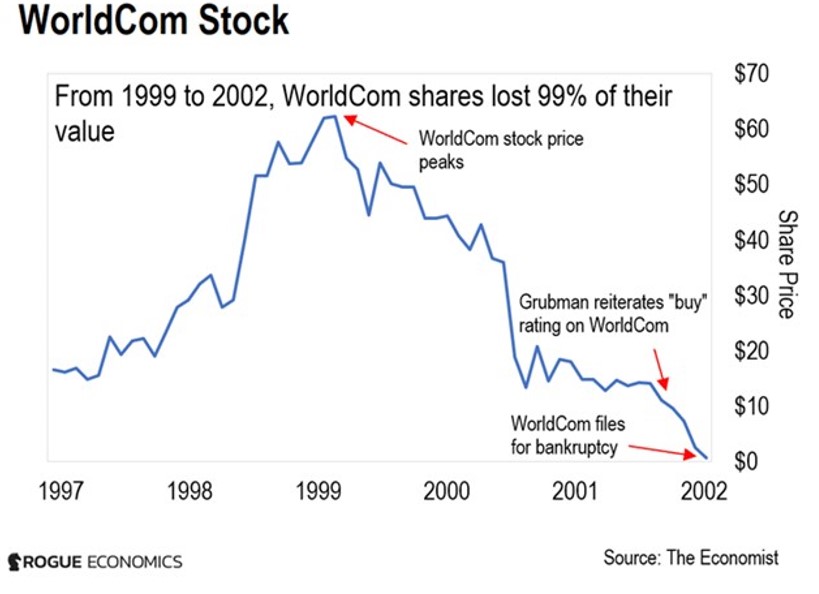 Behind the scenes, there were signs of trouble long before WorldCom filed for bankruptcy. But you had to know where to look.

If you’ve read the book Liar’s Poker by Michael Lewis, you’ll know that Salomon Brothers was big in the 1980s.

But what you might not know is the incestuous relationship between Salomon, Smith Barney, and Citigroup.

Yes, all that merging and name-changing can make your head spin. But here’s why I mention it…

Citigroup was significantly involved in WorldCom at the investment banking level.

At the time, WorldCom was struggling to pay its debt. And as it turned out, it was also cooking its books to hide its true condition.

While all that was happening, my mom’s broker was urging her to invest in WorldCom stock. She followed his guidance… and invested nearly half her retirement fund.

This happened during the months before WorldCom shares took a nosedive. She doesn’t remember the exact dates, but shares were already dropping steadily.

At the time, it might have seemed like a golden opportunity to “buy the dip.” After all, on the surface, WorldCom looked like a world-class company. And it’s not hard to imagine that her broker might have painted that picture for her.

But it turned out to be the worst financial mistake of her life. Because the “dip,” in the case of WorldCom, was not related to overall market behavior – but to fraud.

As a result, my mom lost nearly half of her retirement funds. She did not tell me this until months after WorldCom’s bankruptcy.

She was very upset. But she wasn’t the only one who lost money. Investors in WorldCom stock lost a total of $175 billion.

Don’t Make the Same Mistake as My Mom

Here’s why that makes me so angry.

First, my mom lost that money by trusting a broker to act in her best interest. She didn’t ask me for advice on the situation. She didn’t think she had to – her broker was a professional.

Second, there was the incestuous relationship between Salomon Smith Barney and Citigroup.

It was such that certain brokers could convince their customers to purchase stock in companies that were heading south. They could tout internal positive research as a way to encourage retail customers to buy that stock.

On February 8, 2002, he even reiterated his “buy” rating, according to Salomon Smith Barney research reports. That was just a few months before WorldCom declared bankruptcy.

That was one major reason my mom’s broker used to convince her to buy WorldCom stock.

And this is why, when my mom told me about her experience, it was a defining moment in my life.

By that point, I’d already witnessed the horror of 9/11 first hand from my corner office at the World Trade Center. And I was sick of the greed and corruption on Wall Street.

I resigned from Goldman just before my mom told me what happened to her. But my mom’s experience was the final push I needed to choose the next path of my life.

From that point forward, I vowed to help people like her to avoid these situations. And I’ve made it my mission to reveal how Wall Street really works, so you can arm yourself and prosper.

And today, we’re facing a major distortion similar to the one that brought down companies like WorldCom and Enron. And I want to make sure you’re prepared.

So I hope you’ll join me at my urgent briefing tonight at 8 p.m. ET.

I’ll give you the full story behind the event I’m calling Enron 2.0… I’ll share with you my plan to get revenge on Wall Street… And I’ll unveil my new strategy with the potential to make up to 1,000% gains as this historic event unfolds.

You can sign up for free here. I hope to see you in a few hours.

P.S. As a thank you for tuning in tonight, I’m even giving away the name of one of my favorite stocks, along with a special report my team and I put together called The Dirty Dozen. In it, you’ll find 12 energy stocks to avoid at all costs.

Anyone who shows up to my event will get these for free – no strings attached. All I ask is that you please join me tonight at 8 p.m. ET. So don’t wait – reserve your spot right here.