Before we get into today’s essay, I want to thank everyone who made it to my emergency briefing last night. Thousands of your fellow readers tuned in.

We did a deep dive into a historic distortion unfolding in the energy markets – a “contagion” I call Enron 2.0… And I showed you how you can turn it into the chance to make as much as 10x your money.

If you missed it, I’ve asked my publisher to make a replay available. But it won’t be online for long. So be sure to watch it here.

Now, on to today’s essay…

If you keep up with the news, you might have heard of the G7 Leaders’ Summit.

It’s where the countries with the largest and most advanced economies – including the U.S., U.K., and Germany – come together to discuss global issues.

Unfortunately, this also means that not everyone gets invited.

So in 2009, other countries got together and created their own version of G7: the BRICS Summit.

And these aren’t just any countries. Together, the five BRICS nations are a global energy powerhouse.

And just this summer, they announced plans to establish a tighter economic relationship among themselves… and challenge the U.S. dollar.

They want more control over their own trade, currency, and energy destinies.

And with the latest escalation of Russia’s moves in the Ukraine, that history is important – because it can impact your money. Let me explain…

And at this year’s BRICS Summit in June, Russian president Vladimir Putin made a big announcement…

He said Russia and its allies are working on a new international currency. In Putin’s words, it would be a “basket of currencies” of the BRICS countries.

This new currency is meant to rival the U.S. dollar’s global reserve currency status. That much is clear.

But is this anything to lose sleep over? I’ll get to that in a moment, but first consider this…

Together, the BRICS nations represent 32% of the world’s GDP. That’s the value for all the goods and services the world makes.

And as I mentioned, the BRICS are a global energy powerhouse. And as we’ve seen all this year – from spiking prices at the gas pump, to higher costs to cool our homes – what happens in the energy markets in one part of the world can have a big impact on energy prices here at home.

Take a look at the chart below. It shows the BRICS’ share of global fossil fuel production… 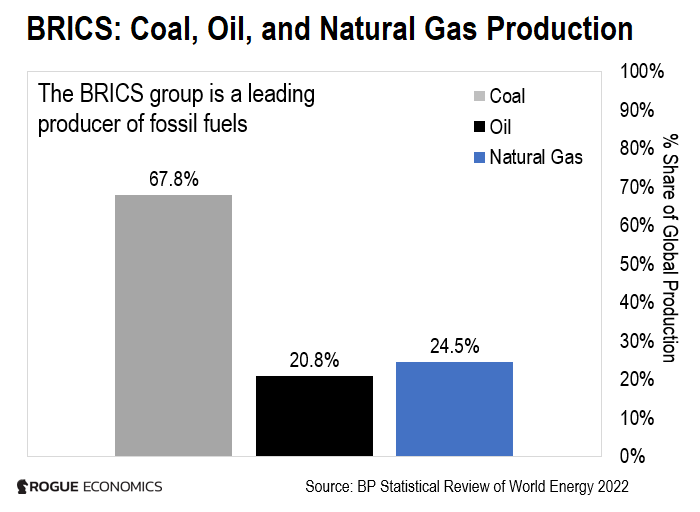 As you can see above, the BRICS countries produce roughly 68% of the world’s coal supply. They also produce about 21% of oil and 25% of natural gas.

China in particular is a force to reckon with. It produced 50% of the world’s total output of fossil fuels in 2020. Plus, it’s also the largest producer of wind and solar energy in the world.

It’s not surprising, then, that BRICS have been raking in billions in profits amid the energy crisis I’ve been writing about in these pages.

In fact, that crisis has been a boon for the BRICS group.

In other words, for BRICS, this isn’t the worst of times to try out a new global currency. And they have the reach to make it work.

Now, this isn’t the first time a nation has tried to dethrone the U.S. dollar.

BRICS countries like China and Russia have been unhappy with the dollar’s dominance for quite some time. And China in particular has taken steps to try to bypass the dollar.

Regular readers will know what I’m talking about. Back in June, I wrote to you about one of China’s attempts: the petroyuan.

This enabled any oil producer in the world to sell its oil for the Chinese currency, giving birth to the petroyuan.

And now, with Western countries slapping Russia with unprecedented sanctions this year… including plans for even more sanctions, which the U.S. and European Union proposed just yesterday…

BRICS countries have even more reason to try to find an alternative to the dollar.

As justified as the Western sanctions might be, it shows the world just how risky it can be to depend on the U.S. dollar.

Countries want control over their finances. That’s especially true for big economies like China and Russia.

A new BRICS currency would reduce any threat by the U.S. to exclude BRICS nations from the dollar-based financial system.

The BRICS countries would also benefit from being able to pay for their energy imports with their own currency.

What This Means for You

So what does this mean for those of us here in the U.S.?

In 1999, for example, 70% of the world’s reserves were held in U.S. dollars. Today, it’s closer to 59%. In other words, more countries are choosing to hold alternative currencies (in addition to U.S. dollars).

That said, I don’t see the U.S. dollar’s status as the world’s primary currency changing any time soon.

Despite 40-year record inflation, the U.S. dollar is still faring well compared to other currencies. You can see this in the chart below… 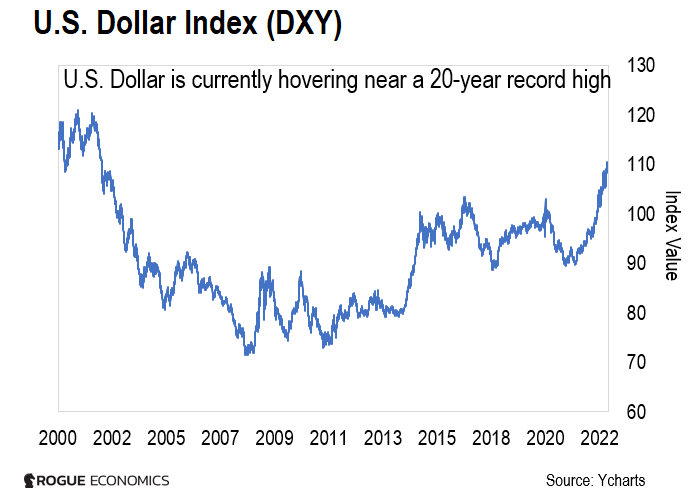 This chart shows the U.S. Dollar Index (DXY). It tracks the value of the dollar against a basket of foreign currencies. And as you can see above, the U.S. dollar is hovering near a 20-year record high.

Even if BRICS rolls out its new currency tomorrow, it will take a long time before that currency can really challenge the dollar.

And that’s because, for an international currency to be successful, it has to meet three criteria. It has to:

To be sure, the BRICS’ efforts to de-dollarize their economies are worth paying attention to. But it’s not something that could happen overnight.

Until a BRICS currency can meet the three criteria above, the biggest threat to the U.S. dollar remains the Federal Reserve.

So if you’re worried about China and Russia’s efforts to dethrone the dollar, my advice is simple: Don’t lose sleep over it. I don’t expect that to change in my lifetime.

P.S. Right now, there is a much bigger threat to your retirement than China and Russia’s efforts to dethrone the dollar… And it’s set to trigger as early as November 2nd, just a few weeks from now.

I held an emergency briefing last night to tell you all about it. Thousands of your fellow readers tuned in. I did a deep dive into the energy crisis I’ve been covering in these pages… and showed you the steps you need to take to prepare your portfolio today.

I even shared how to turn crisis into the opportunity to make as much as 1,000% as this historic distortion unfolds. If you missed it, I’ve asked my publisher to make a replay available. But it won’t be online for long.