We all need clean drinking water to live. So does every organism on the planet.

But right now, the world is facing a water crisis.

And here in the U.S., the water problem is reaching critical levels.

Drought is no doubt a factor. But there’s also another issue…

The water infrastructure in this country is crumbling. That means we are losing some of our precious supply of drinking water.

Today and tomorrow, I’ll shine a light on this emerging crisis. And I’ll show you what it means for investors who know where to look.

To start, let me give you a sense of how scarce water is… And why we should be grateful to the distributors and suppliers of our water.

Water covers 70% of the Earth’s surface. But as you can see in the chart below, 97.5% of that is saltwater – which we can’t drink. 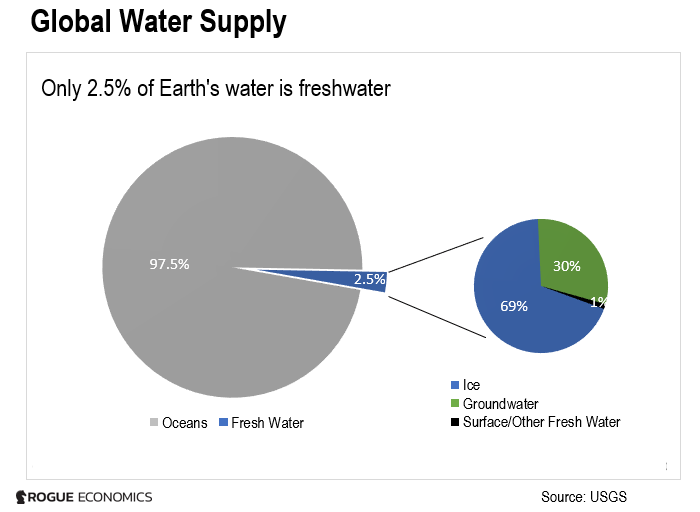 The other 2.5% is fresh water. But just 1% of all the freshwater in existence is available and drinkable.

So, when it comes to fresh water, access and distribution are critical. But as I mentioned, we’re now facing a global water crisis.

About 4 billion people experience severe water scarcity for at least one month of the year. That’s nearly two-thirds of the global population.

But the reality is that the entire world is now teetering on the brink of a massive water crisis.

Here’s a picture that’s worth a thousand words… 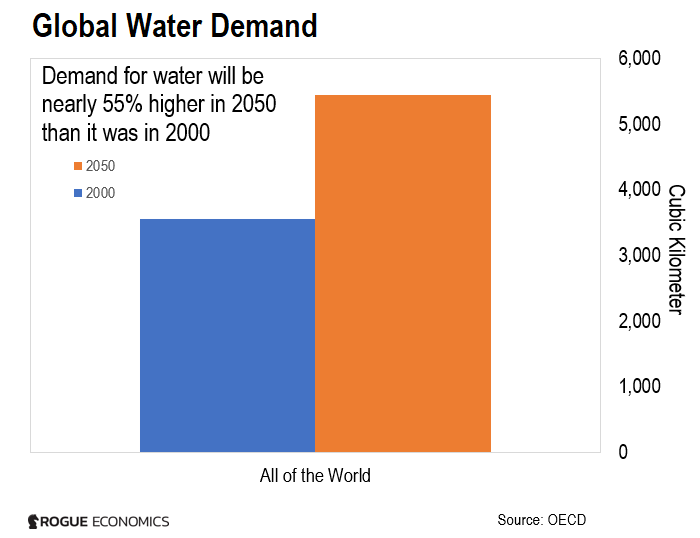 The Organisation for Economic Co-operation and Development (OECD) forecasts that we will use nearly 55% more water in 2050 than in 2000.

And the United Nations (U.N.) says that intense water scarcity could displace 700 million people worldwide by 2030.

One of the main reasons for this is population growth.

The OECD predicts that the population of the world will reach 9.2 billion people by 2050. That’s up 18% from the 7.8 billion people on the planet today.

This population increase, coupled with the resulting increase in urbanization, will intensify the water scarcity problem.

And the more the world’s population grows, the more of everything it will consume. This will inevitably lead to greater industrial output, especially in food production.

Today, agriculture uses about 72% of the world’s fresh water supplies.

That makes food production – which is already experiencing supply chain disruptions – an even bigger drain on water resources.

But the U.N. reports that drought frequency and duration has already increased by 29% since 2000.

And it predicts that if current water usage trends continue, 75% of the world could face drought by 2050.

That’s just 28 years down the line.

Water Shortages in the U.S.

The most acute water challenges are in the developing world.

For example, here in the U.S., much of the water infrastructure is over a century old. A lot of it is badly deteriorated.

The American Society of Civil Engineers (ASCE) reported that there is a water main break every two minutes. As a result, 6 billion gallons of treated water are lost – a day. That’s enough to fill over 9,000 swimming pools.

In California, where I live, water scarcity is a constant, serious problem.

Before the summer began, two of its largest reservoirs were at low levels.

Right now, after the most extreme drought conditions in over 100 years, its reservoirs are at critically low levels.

But even as it faces this water crisis, water usage across the state is increasing. This is despite Governor Newsom’s pleas to citizens and businesses to reduce their usage.

And it’s not just California that faces this problem.

Tomorrow, I’ll shine a light on one of the biggest emerging distortions in the water sector… And I’ll share one way you can take advantage of it in your portfolio.