The day has finally come!

Tonight at 8 p.m. ET, in an online event called Great Distortion: The Next Chapter, I’m unveiling a new strategy I’ve been perfecting for the past two years…

It’s a way for you to make up to 10x your money… in less than a month… even if markets are down, like they are right now.

So what are you waiting for? Click here now to automatically reserve your spot… then tune in tonight at 8 p.m. ET.

That compares to just 17.5% for the average American worker.

And a select group of CEOs even grew their compensation by nearly 20% during 2020, when many companies in the country had to shut down.

I also told you how CEOs earn, on average, 351 times the average American worker. So you’d have to work almost every day in the year to earn what a CEO earns in one day.

It’s all a factor of The Great Distortion I’ve been telling you about now for a while. And it’s something that’s been on the minds of several Inside Wall Street readers, who’ve written to me about this…

Reader Jerry K. correctly stated that “some kind of good old boys’ club” is to blame…

While many regular Americans are struggling to keep up with spiraling inflation, Dimon has been raking in millions. His 2021 total compensation package was a massive $84.4 million.

That includes his $1.5 million salary, $5 million cash bonus, $25 million stock award… and $52.6 million worth of stocks and options as a “retention bonus.”

Even JPMorgan Chase’s shareholders found that a bitter pill to swallow. Last month, they voted to reject the full package.

But here’s the thing… that vote is non-binding. So it remains to be seen what Dimon will ultimately get paid. But rest assured, this long-time member of the old boys’ club will do just fine…

And Dimon’s not alone…

Last year, Goldman Sachs CEO David Solomon raked in $35 million in total compensation. This was double his take in 2020.

And Tesla CEO Elon Musk took in $23.5 billion last year. Yes, billion. That was largely because he exercised some stock options from his 2018 package.

Now, exorbitant CEO compensation is nothing new. In fact, I experienced the “good old boys’ club” from the inside of Wall Street for years.

You see, for everyday Americans, money provides security. We need it to pay our mortgages, bills, and kids’ college fees. And with costs rising at a fast clip, at the end of the month, many Americans have very little left over.

But for the executives at big banks, what they get paid is all part of a crazy competition. It’s not about the amount they get paid, per se. What’s more important is “beating” the other CEOs with their crazy compensation packages.

For these people, money represents winning. And power. And they’re loathe to give up even a tiny bit of either.

In early 2001, I was a managing director at Goldman Sachs. The economy was slowing down. Even Goldman was looking at lower profits for the year.

My boss told me to tell my team that their compensation would be lower that year (as was mine).

My thoughts turned to our administrative staff. Their salaries were lower to begin with. For them, any cut would be incredibly painful.

I suggested that all managing directors (myself included) take an extra cut so we wouldn’t have to reduce the admin staffs’ pay.

My boss looked at me like I was crazy. He said, “Nomi, that’s not going to happen.”

Now, you’ve probably wondered before… Why do CEOs get paid these exorbitant amounts to begin with?

When I worked on Wall Street, the answer often came down to three words: “market for talent.”

Basically, what that means is this… What drives executive pay is the market demand for the skills of CEOs and other highly paid professionals.

Those who believe this argument claim that “skills” and “talent” determine CEO compensation.

But this narrative completely falls apart if we look closer.

Yesterday, I showed you how much CEOs make compared to the average American worker. They’re earning about 350 times more per year.

But even those on top wages, with skills and talent equivalent to most CEOs, need to look out…

Just take a look at the chart below. It shows CEO compensation versus the earnings of the top 0.1% of earners. It’s based on data from the Economic Policy Institute (EPI). 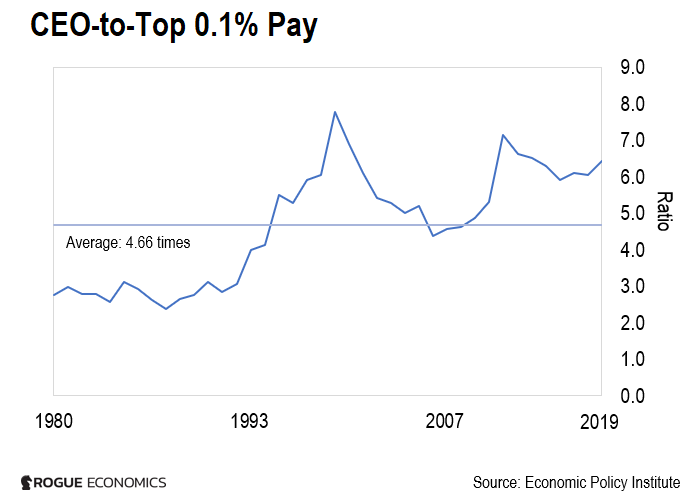 This is quite a shocking revelation when you consider that the top 0.1% are those earning more than 99.9% of wage earners.

But in recent years, that gap has gone even higher. In 2019, CEO compensation was nearly 6.5 times higher than the wages of the top 0.1%.

So even if you manage to climb the corporate ladder, your compensation won’t match that of the top CEOs in the good old boys’ club.

How We’ll Level the Playing Field

So what can you do about it?

It’s a strategy that will help you make money, even when the markets are dropping, like right now…

Now, it may not put you on Jamie Dimon’s level, but it could help you make up to 10x your money in less than a month.

And with the next chapter of The Great Distortion about to kick off in August, with a $4 trillion market shock, now is the perfect time to learn all about it.

That’s why I’m holding a special online briefing tonight at 8 p.m. ET. I’ll reveal all the details of my proprietary new strategy then.

(By clicking the link above, your email address will automatically be added to my RSVP list for the event.)

I look forward to seeing you there at 8 p.m. ET.

P.S. Just for tuning in tonight, I’ll reveal the name of a stock my strategy is flashing a “buy” on right now – and that I believe could potentially double. That way, you can get started making money straight away. So make sure to automatically reserve your spot now.