If you’re like most Americans, you’re probably worried about gas prices.

In fact, a Gallup poll earlier this summer revealed that increasing gas prices are causing financial hardship for 67% of Americans.

Average energy prices have increased by nearly 24% over the last year here in the U.S. That’s according to the August CPI figures released earlier this month.

And sure, we’ve seen some relief at the gas pumps in recent months. The national average price of gas has dropped from $5.01 in mid-June to $3.70 today.

Even in my home state of California, where gas prices are higher than in nearly every other state in the country, I can fuel up my car for about a buck cheaper per gallon now than in mid-June.

Yet, I believe this is only the calm before another storm in energy prices.

Winter is just around the corner… and that means higher demand for energy. And when demand increases, prices typically follow.

Some sectors will suffer the effects of higher fuel prices more than others.

What’s more… a distortion 100 times bigger than Enron is hurtling toward us. And as far as I know, I’m the only one talking about it.

That’s why tomorrow night at 8 p.m. ET, I’m airing an urgent broadcast to prepare Americans for the worst… and show a select few how to turn crisis into the opportunity to make as much as 1,000% gains as this historic distortion unfolds.

Go here to secure your spot (100% free) at my urgent market briefing.

As fuel prices soar, the good news is that there are also sectors that will benefit.

And today, I’ll show you how to take advantage of one such sector.

But first, let’s take a look at one part of the energy market that hasn’t seen any relief yet – your electric bill.

We’re seeing higher prices across the board as a result of increasing fuel costs.

That’s because we use fuel for everything – getting people and goods from point A to point B… cooling or heating our homes… even keeping the lights on.

And for some households, rising energy prices are having disastrous consequences.

For instance, household electricity charges are up 15.8% over the last year. As a result, 1 out of every 6 American homes is now behind on its utility bills.

According to the National Energy Assistance Directors Association (NEADA), those households owe a total of $16 billion in unpaid utility bills. That figure is double what it was before the pandemic.

It’s the worst crisis NEADA has ever documented.

Some utilities have cut off more than 40% more customers than they did pre-pandemic in what one expert describes as a “tsunami of shutoffs.”

The reality is that while Federal Reserve Chairman Jerome Powell speaks about the “strong underlying momentum” in the economy, regular Americans are struggling to keep the lights on during this period of Great Distortion.

Factors Behind the Rising Price of Natural Gas

There’s one main reason behind the spike in electricity costs. It’s the high cost of natural gas.

You can see that growth in this chart. It shows the share of the total U.S. electricity supply provided by each of the main electricity sources since 2005. 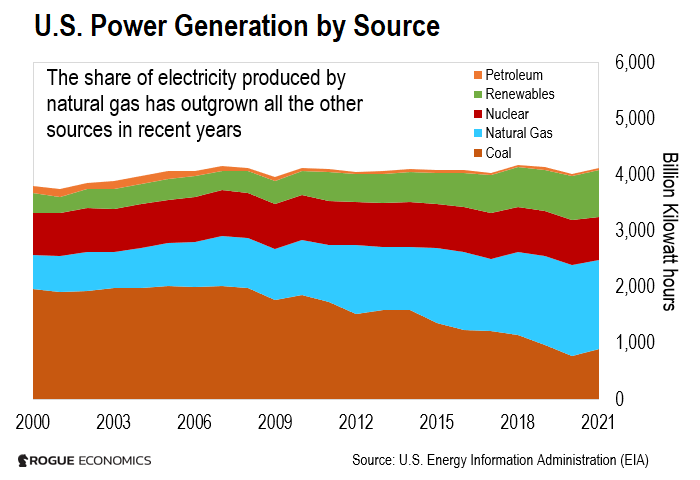 As you can see, the share of electricity produced by natural gas (the blue line) has outpaced all the other sources in recent years, including petroleum, nuclear, and renewables.

Today, U.S. natural gas prices are up 52.6% relative to a year ago. Last month, they hit 14-year highs. This was largely due to the increased use of air-conditioning in this summer’s soaring temperatures.

In fact, natural gas futures – the price traders pay – nearly doubled over the last year, as you can see in this next chart. Oil futures are up about 30%. Meanwhile, the S&P 500 is down 16%. 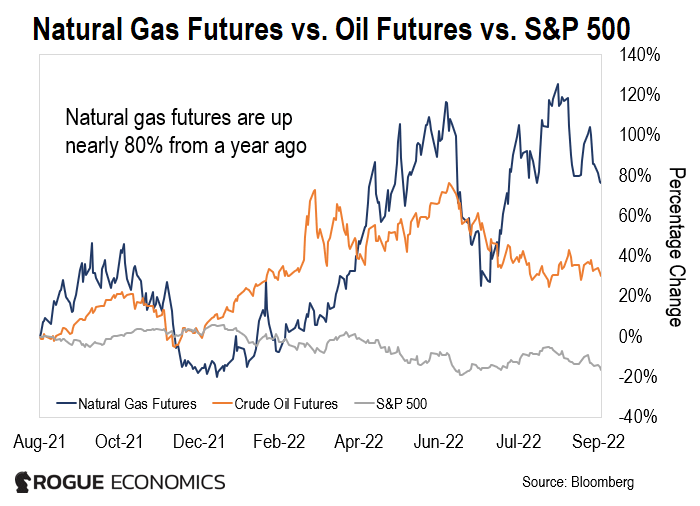 Why the recent spike in natural gas prices?

On August 19, Russia announced that it was shutting down the Nord Stream 1 pipeline for three days of maintenance, starting on August 31.

Nord Stream 1 is Russia’s largest gas pipeline to Europe. Last year, the European Union (EU) got roughly 45% of its imported natural gas from Russia, according to the International Energy Agency. And nearly 40% of that came via Nord Stream 1.

On September 2, Russia extended the shutdown and provided no timeframe for a reopening. At writing, it remains offline.

It’s not clear whether this is unplanned maintenance or if it’s in retaliation for western Europe’s pro-Ukraine stance. Either way, it underscores the fragility of the world’s energy supply.

And right now, countries in Europe are scrambling to find alternative sources of energy and fuel, especially as winter approaches and the war in Ukraine continues.

For example, in recent months, we’ve seen a dramatic escalation in demand for U.S. shale gas from the United Kingdom and other parts of Europe.

All the uncertainty surrounding the natural gas supply is pushing global prices higher.

Added to that, during the summer, the European Union (EU) announced plans to ban seaborne imports of Russian crude oil starting December 5. And it said it will impose a ban on petroleum product imports starting on February 5 next year.

Recently, the leaders of the EU and other G7 nations decided to try to limit Russia’s oil revenues. They proposed a price cap of somewhere between $40 and $60 a barrel on Russian oil. This would also come into effect on December 5.

If and when these measures are implemented, they will have a knock-on effect on all energy prices across the globe.

Triple Whammy as We Head Into Winter

So this rise in natural gas prices isn’t a short-term phenomenon. And it’s destined to build into a crisis across the Atlantic this winter.

When the weather gets colder, demand for natural gas-fueled electricity will rise as a result.

And if prices spike because of what’s happening overseas, you can bet they will spike in the U.S., too.

In general, colder weather increases demand for natural gas for heating. This is true in both the residential and commercial sectors. That puts upward pressure on prices.

This supply problem is exacerbated when cold winters follow very hot summers. And Europe has had its hottest summer on record.

Because of the soaring temperatures there, folks are using more natural gas to power things like air conditioners.

This means less natural gas is available for storage. Which, in turn, leads to lower available storage volume once winter hits.

So we have reduced supply due to geopolitical tensions. That’s coupled with higher demand due to a hot summer. And colder weather is approaching.

That triple-whammy is why we will see more natural gas price spikes as we head toward winter.

There are several types of companies that have already profited due to rising natural gas prices.

And I believe natural gas prices will continue to rise through the winter.

So, for the purest way to take advantage of that rise, I recommend the United States 12 Month Natural Gas Fund (UNL). It’s an exchange-traded fund (ETF) that tracks the price movements of natural gas.

And tomorrow, Wednesday, September 28 at 8 p.m. ET, I’ll be sharing the details of an even better opportunity.

At my special event, I’m going to do a deep dive into the energy crisis… and what you can do to prepare your portfolio for the worst.

I’ll also share how to turn crisis into the opportunity to make as much as 1,000% as this historic distortion unfolds.

If you have more than $5,000 in the markets right now, you absolutely cannot afford to miss this private broadcast.

So be sure to reserve your spot right now.

P.S. As a thank you for tuning in tomorrow night, I’m even giving away the name of one of my favorite stocks… along with a special report my team and I put together called The Dirty Dozen. In it, you’ll find 12 energy stocks to avoid at all costs.

Anyone who shows up to my event will get these for free – no strings attached. All I ask is that you please join me tomorrow night at 8 p.m. ET. So don’t wait – reserve your spot right here.