Like Nomi, Teeka believes Bitcoin will play a crucial role in protecting the value of your hard-earned money over time. Now, we know some longtime Rogue readers may be skeptical of Bitcoin and other cryptos – especially with the volatility we’re seeing right now. But if you have any money in these new digital assets, you’ll want to read Teeka’s essay closely.

He shows why he’s not concerned about short-term price swings. And why he believes the “blue chips” of crypto deserve a place in your portfolio…

I will always be upfront with you.

If you’re new to crypto and haven’t experienced this type of volatility before… you’re probably wondering if we’re headed into another “Crypto Winter.”

Even for long-term HODLers (Hold-On-For-Dear-Lifers) like myself… the drawdowns we’re seeing are stomach-churning.

But I don’t believe we’ll experience anything close to what we saw in the 2018 Crypto Winter… when BTC and ETH dropped more than 80% and 90%, respectively.

Back then, the use cases for many blockchain projects were completely theoretical. They just hadn’t come together yet.

Today, we’re seeing real-world use cases across numerous digital platforms. And venture capitalists are allocating tens of billions of dollars to these projects.

So, the digital asset space has matured a great deal compared to three years ago. And there are many more participants in the market now.

Despite that growth in funding and development, I do believe we’re in a “cyclical” bear market occurring during a “secular” bull market.

Here’s what I mean…

All Markets Move in Cycles

There are two types of market cycles: Secular and cyclical.

Secular markets are long-term “one-way” directional moves that generally last between 12 and 20 years.

Within these secular markets, we also have shorter “cyclical” markets. They can last from a few months to 1 or 2 years. 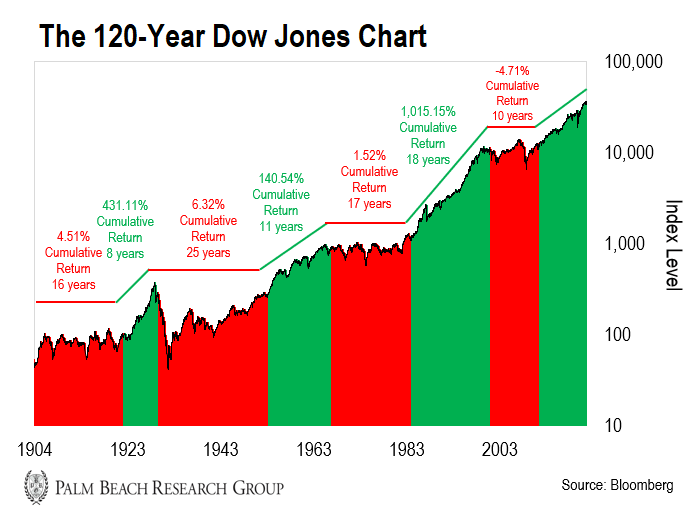 The red areas are secular bear markets – when stocks trade sideways or down for extended periods.

So what does that actually mean?

If you look closely at the chart above, you’ll see numerous peaks and valleys within the long-term trends.

Despite that crash, the market powered 1,105% higher over those two decades.

And we saw a similar “cyclical” bear market during the pandemic outbreak in March 2020. The market crashed as much as 36%.

Even with the pandemic crash and the current bout of volatility… the market is still up 245% since 2012. 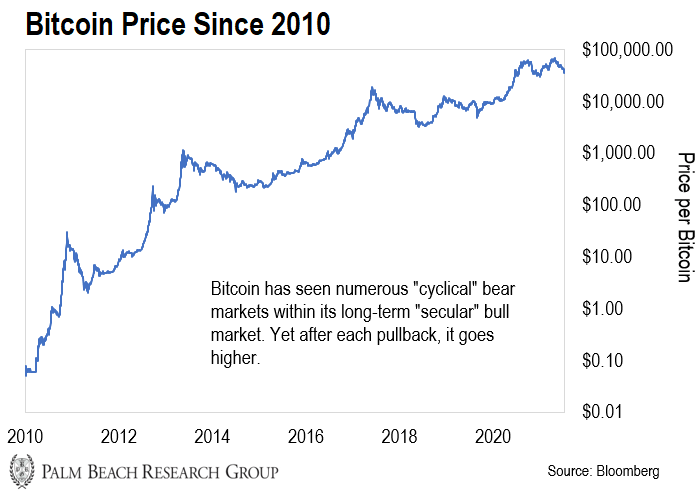 Now, Bitcoin is a relatively young asset compared to equities.

But as you can see, the long-term trajectory is up, despite incredible volatility. But like a springboard effect, Bitcoin bounces even higher after each drawdown.

Here’s why I’m pointing this out…

Many investors mistake cyclical bear markets for a long-term directional change in the overall bullish trend.

And it’s a huge mistake…

To make money in the stock market from 1982–2000, you only had to know one thing… Whether we were in a long-term bull market or a long-term bear market.

If you believed it was a secular bull market… all you had to do to crush every single money manager in the world was buy blue chips when the market pulled back.

That was a winning strategy for nearly two decades.

The same applies to the Bitcoin chart…

If you believe we’re in a long-term secular bull market in crypto assets (as I do)… all you need to do is buy blue-chip cryptos like Bitcoin and Ethereum on pullbacks.

It may sound overly simple… or contrary to nearly every mainstream crypto headline right now… but it’s a proven, winning strategy.

I’m Losing Millions Every Day… But I’m Not Worried

I’ve been in the crypto space for years… and I have tens of millions of dollars of my own money allocated to it.

So, I’m losing millions of dollars every day as prices fall…

But it’s not my first rodeo.

Through all of that, I learned you can’t just look at price as the barometer of long-term value in an asset class.

As a young investor, I made that mistake with companies like Microsoft, Oracle, and Apple.

I got in these names when they were trading for the split-equivalent of single-digit dollars… But boy, did I sell way too early.

I confused cyclical (short-term) price volatility with a long-term change in fundamentals.

So instead of price, I now look at a technology’s adoption rate as the No. 1 metric to project long-term value.

In the early ’90s, all you needed to know to make a fortune from Microsoft was that the number of personal computers would explode over the next two decades.

It’s the same story with Bitcoin…

Crypto.com estimates there are 200 million people who use crypto assets. By the end of this decade, I believe at least 4–5 billion people will be using Bitcoin.

We’ll see multiple countries add BTC as legal tender and as a reserve asset in their central banks. And the price of Bitcoin will be significantly higher.

It will bring you peace of mind and the ability to hold onto these assets when everything is screaming at you to sell.

A Mental Trick to Beat Volatility

Friends, the biggest lesson I’ve learned from those past mistakes is that there is no free ride.

If you want to buy Apple below $1 and make 50x, 500x, or 5,000x your money, you will pay… And the price will be volatility and the emotional suffering that comes with it.

There’s just no way around it.

Look, I get it. We’re not robots. We’re humans full of emotion.

Watching your portfolio fall is hard to stomach. Even when you know that crypto’s long-term fundamentals are still intact.

So, here’s my advice… something I personally do when the crypto market looks like it does today and I’m losing money hand over fist.

I imagine that the Bitcoin I’m holding was inherited, and that it’s in a trust I can’t access for the next five years.

This mental trick helps me disconnect from the rollercoaster nature of the prices… and the emotion that comes with it.

And it’s been very effective for me in times like these. It’s a tool I wish I had back when I sold out of Microsoft and Oracle too early.

Because if I had that tool in my toolbox, I would’ve said, “Okay, look, you’re 22 years old. You are part of a private trust that doesn’t unlock until you’re 27. You can’t touch this money until then.”

I would’ve stayed in those positions and made untold millions of dollars if I had done that.

It would’ve been transformational for me.

Instead, the emotional and financial cost of not having that mindset in the ’90s negatively impacted me for 25 years.

That’s what’s at stake here. The quality of the next 25 years of your life will be built by the decisions you make today.

Remember, volatility is the price of admission we pay for life-changing crypto gains.

This isn’t the first time we’ve seen crypto take a huge hit… and it won’t be the last.

How you come out on the other side of this… when prices inevitably rebound and hit new record highs… is entirely in your control.