Maria’s Note: Maria Bonaventura here, managing editor of the Diary. In this weekend’s guest edition, Bonner-Denning Letter coauthor Dan Denning provides some insights on the current crisis… and a discussion of what to do with your money as the crisis unfolds.

The coronavirus has already triggered a bear market in stocks. Now, it threatens to trigger a global depression. But if you’re over 60, that’s not the biggest risk you face right now. The biggest risk is to your health.

You may never see another one-two punch like this again. That’s why I’m writing to you today.

Bill and I, along with colleague Tom Dyson, have been in regular email and phone contact. Bill, as you know, is down on his ranch in Argentina. Tom is staying with his in-laws in Florida. And I’m hunkering down in Australia.

We all agree that there are unprecedented financial and economic moves afoot.

If you’re a Bonner-Denning Letter reader, hopefully you followed our advice and put in place a sensible asset allocation plan. Our long-standing recommendation has been to invest in a mix of cash, bonds, gold, crypto, and collectibles, in addition to your stocks.

This would have cushioned the blow from the more-than-30% peak to trough plunge of stocks.

(Note that our asset allocation strategy changed this week, in light of recent events in the financial markets. If you’re a Bonner-Denning Letter subscriber, find the latest – called the Crisis Portfolio – here.)

Today, I want to bring your attention to three items.

The first is the potential for further falls in stocks. The second is the explosion in stimulus money from governments and central banks that’s on the way. The final is the only trade worth making right now – in gold.

The Fed Is Trying Fight the Downturn in Stocks

As I told Bonner-Denning Letter readers recently, three bear markets since the 1929 crash saw declines of 40% or more. The average of these declines was 51%. And it took, on average, 58 months (nearly five years) for stocks to hit a fresh high.

If you buy back in too early, in other words, you go underwater. And you need an even bigger gain just to break even.

That brings us to the Federal Reserve. It’s trying to fight the downturn by rolling out various asset-buying programs – what’s typically referred to as quantitative easing, or QE – to bail out Wall Street and corporate America. 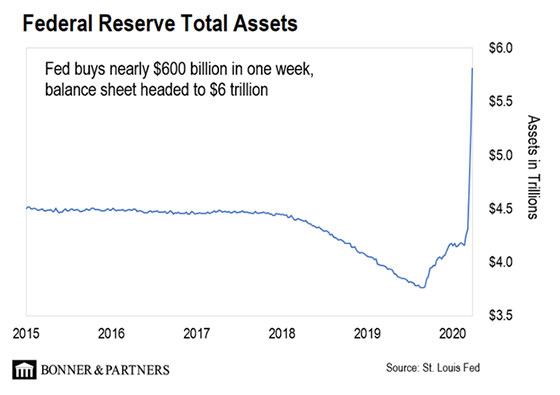 It’s worth mentioning that last year, Bill and I calculated that the Fed’s balance sheet would grow to 40% of GDP by the time the next crisis was over. Now, that estimate looks conservative.

So does our prediction that the U.S. national debt would grow to $40 trillion in the next 10 years (from $23 trillion today). It could hit $50 or $60 trillion before this thing is over.

Given those numbers, we believe the deflation in financial asset prices will give way to massive inflation. That’s good news for gold. But there’s a catch…

What Gold Does in a Stock Crash

Something odd happens to gold at the start of a stock crash. Leveraged traders sell their gold and other liquid assets to raise cash.

That’s why gold fell by about 30% at the height of the 2008 crisis. Gold dipped recently, too.

In short, a wall of stimulus money is coming toward economies in this and the coming quarter. When it does, we believe gold will become the only safe-haven asset worth the name “risk-free.”

The biggest risk is we’re wrong about the coming inflation. If we are, the global economy will enter a depression. But the gold bullion you own will be more valuable than ever.

Gold is a tangible asset. It can’t be printed or created with a few keystrokes. That’s why we think the setup is great for trading the financial assets (gold stocks) and owning the physical ones (bullion).

P.S. Bill has been busy in isolation. He just finished a detailed review of the political, economic, and monetary consequences of the COVID-19 crisis. What’s next? What changes are coming to our government, our society, and our economy? And what should you do with your money today?

Bill set out to answer those questions in a full report, After Armageddon… along with a Crisis Portfolio I put together to guide you through these dangerous times. If you’re a Bonner-Denning Letter subscriber, you’ll find Bill’s After Armageddon report here, and our new Crisis Portfolio here. If you’re not a subscriber yet, read on to learn how you can get access to both reports – and more.