WATERFORD, IRELAND – We are making Ireland the hub of our global publishing business.

So we need a place to live here.

The last couple of days have been spent prospecting.

“We want something with character… a challenge… something we can fix up,” we explained to the real estate agent.

Readers who suspect we have enough projects already can get in line behind friends, family members, and psychiatrists.

But this project will be simpler than others. And at least it will be in an English-speaking country.

Yes, we could simply rent an apartment in Dublin. But no, there wouldn’t be much fun in that. Instead, we came upon a real project yesterday…

The house is a wreck. We expected that. The surprise was that the land upon which it stands is lethal. No kidding. Here’s the sign:

“It ought to be cheap,” Elizabeth opined.

Meanwhile, we turn our attention back to our beloved homeland… and its fake-money system.

Almost every day, the press, economists, and politicians cheerfully tell us how great the economy is doing… how the tax cut has revved up old engines… and how the stock market is hitting new highs.

And almost every day here at the Diary, we put on our own smirk and say the contrary: The economy is a sham. The stock market is sleepwalking toward a cliff. And the whole fake-money fantasy is about to enter a new, grim stage.

Now, admit it, Dear Reader: You were beginning to think we were wrong, weren’t you?

We were beginning to wonder ourselves. But today, we’ll look at more dots. Draw your own conclusion.

Last week, we gave you two reasons why the government’s GDP numbers are fraudulent.

They pretend to track real growth and prosperity. But IMF chief Christine Lagarde pointed out that you could raise GDP by just putting more women to work.

If Japanese women stopped cooking their own meals and doing their own laundry, for example, GDP would go up 9%!

And Joe Withrow, who heads up the Bonner & Partners research department, showed that GDP went up two dollars for every one dollar handed out by the feds.

Neither describes the kind of real growth that produces real wealth.

And now comes another dot to connect – the latest GDP “growth” figure out of Washington.

It didn’t come in anywhere near what the Trump Team was hoping for. Not 6%. Not 5%. Not 4%. Not even the 3% expected by a survey of Bloomberg economists. Instead, the reading for the last three months of 2017 was just… 2.6%.

That’s no better than we were getting in the Obama years.

The reason given for any growth at all was “strong consumer spending.”

That puzzled us. How could consumers spend money they didn’t have? As of the final quarter of 2017, they’d gotten no tax savings. Their wages hadn’t gone up – the typical working man hasn’t had a raise in 30 years.

So where did the money come from?

Simple: Consumers dipped into their meager savings. In other words, the “growth” was fake. It was not real growth of incomes or output… but of using up precious reserves.

Americans don’t have much money saved. Studies reveal that seven out of 10 people couldn’t raise $1,000 in an emergency. Still, so sure are they that no emergency will present itself that they’re saving even less.

Over the fourth quarter last year, the household savings rate fell from 3.3% to 2.6%.

If the savings rate had stayed the same, fourth-quarter GDP growth would have come in at barely above zero… which makes us wonder about the first, second, and third quarters of the year ahead. What if households are suddenly struck by an instinct for caution?

If households try to make up for the money they should have saved in the fourth quarter but did not, the savings rate will jump to 4%. That is still way below the standards of the 1980s and 1990s.

But that modest attempt at prudence would put the Q1 GDP growth rate at MINUS 1.4%… and growth would disappear entirely.

But that is the problem with all these phony-baloney “stimulus” efforts. People borrow from the future; eventually, the future shows up and wants to be paid.

Straight-up moves in the financial markets are fun while they last. But they’re miserable when they come to an end.

And they always end – usually by erasing 100% of the gains in a symmetrical straight-down move.

Let’s use the biggest bubble of our lifetime as an example. Here’s a chart of the Nasdaq right before and after the dot-com bubble in 2000… 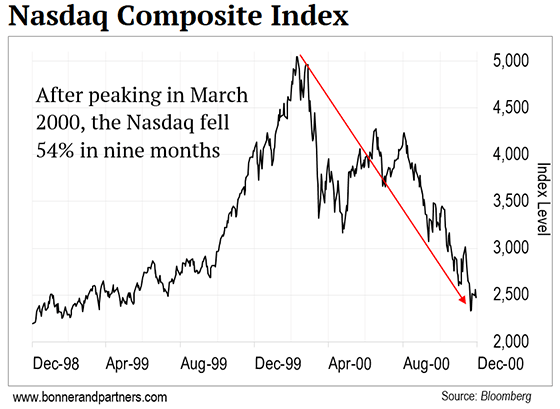 The Nasdaq started its parabolic move in June 1999. The rally lasted nine months, and by the time the index peaked in March 2000, the Nasdaq had doubled in value.

The index had gone vertical. It was panic buying. Get in or get left behind.

Those sorts of moves are exhaustive. They’re unsustainable.

Nine months later, the Nasdaq was all the way back down to where it was trading in June 1999. 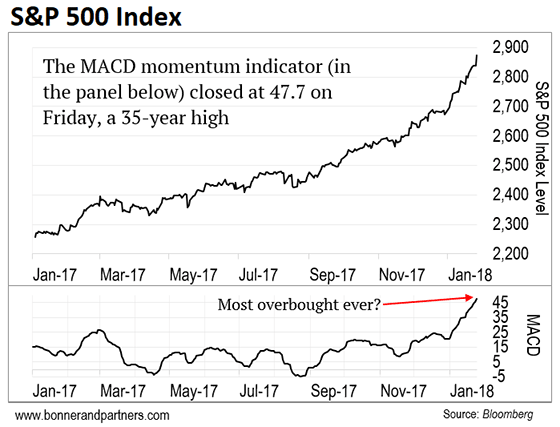 The S&P 500 has gone vertical. While we can’t possibly know exactly when the rally will end, the slope of the parabola suggests we’re approaching the exhaustion phase.

This is a dangerous environment in which to put new money to work. We can’t know for sure. But it seems to me traders should get a shot at investing at lower prices sometime within the next three months.

P.S. Each day in my free e-letter, the Market Minute, I take a look at the trends taking shape in the market… and show you how to prepare for the trading day ahead.

To receive the Market Minute in your inbox every day the market is open, sign up with one click right here.

Has This Bull Market Changed the Rules for Good?
Today’s bull market in stocks has lasted for almost nine years. That’s the second-longest in modern history. It has some asking if the rules of investing have changed for good.

Confronting America’s Extreme Poverty
As the most recent piece of research from Bonner & Partners showed, most American counties have been declining for years. The people in those counties are also suffering, and it’s reaching catastrophic levels.

Avalanche Warning
Global stocks are on a tear. But Bill Bonner Letter coauthor Dan Denning is issuing a warning. Today’s stock gains are an avalanche waiting to happen…

In the mailbag, the Bonner & Partners report on America’s Depressed Counties has gotten readers thinking…

Spending subscribers’ payments on research exposing the flaws in government statistics is a good use of our money! Thanks to you and your research department!

Also, your reader who (in effect) compared GE to a dinosaur was on the right track. Animals get big in order to survive big predators, not because it’s efficient in terms of nutrition. Thus, big government begets big corporations because voters and their representatives (in a big majority) vote to extort or extract money from businesses and give it to the government, hoping to get some benefit for themselves.

My bet is that we will not see government get any bigger on this round of the cycle. The mammals are already starting to run rings around them.

Your number of 2,278 counties is wrong! At LEAST, you need to add one more, which is Dolores County, Colorado, which you marked green as in “improved,” coming to 2,279. The county – county seat Dove Creek – experienced a drop in population and business over the past 10 years of 30%.

But the GMO industry is slowly killing our population. So our government says they were just the poor.

I think it is interesting how you present the numbers, which you acknowledge can be presented to say anything. The data used for this analysis represent where we are after years of failed government policy; the last eight for this analysis were a complete disaster.

You allege that the Trump White House is complicit in the cover-up of this “depression.” Your numbers don’t include the last 13 months of effort to deal with this. And, in fact, when the numbers catch up, they will show that this administration is the only one in recent times to really make a difference in the bottom 99%. Nice analysis of how socialism has failed a free-market economy.

Love your wit, writing style, and analysis – spot on! In regards to the map showing economic improvement, or lack of it, across municipalities, it’s a brilliant idea to try to get a clearer picture of what is really happening in our country. One thought, though: There is likely mobility across county and state lines over a decade. The people living in these counties now are not necessarily the same ones that lived in those locales a decade ago.

I don’t think this changes the larger picture that most counties are struggling. But I’m wondering if this plays into your thesis at all? Keep up the great thinking and writing!

I have just read your report on “America’s Depressed Counties.” I find that report to be of the finest quality, and wish to convey kudos to whomever the author is. It was a pleasant surprise. I have found the vast majority of such reports to be trash. As a matter of fact, my first inclination was to ignore it.

Please do not take my words lightly. I normally do not tout my qualifications, but I have approximately 120 semester units (half grad) in various aspects of such research. I have written in scientific journals and have reviewed articles submitted for publication. I spent several years of employment using such methodology, and have managed two operations research shops, in addition to conducting and being personally involved in such research. EXTREMELY fine work.

This could end up being the single most significant event in our firm’s history: the Legends of Finance Summit on February 8.

During this historic event, you’ll learn how to profit from Bill’s Trade of the Century – and how legendary speculator Doug Casey used this concept to build a multimillion-dollar fortune over five decades. Details here. 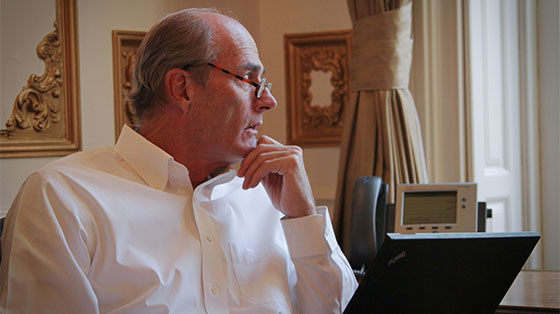