PARIS – We came up to Paris to say goodbye to a daughter… who is headed back to the U.S.

She chose La Closerie des Lilas for dinner, the restaurant made famous as a Hemingway hangout.

And there, in front of the restaurant, on the corner of the Boulevard du Montparnasse and the Boulevard Saint-Michel, we found the statue of the greatest soldier who ever lived, Michel Ney, standing near the spot where he was executed.

The statue of Michel Ney in Paris

The inscription at the base of Ney’s statue

It’s when things go bad that you open your eyes. The crash of the stock market in 1929 caused people to take a new look at Herbert Hoover; even the great mining engineer couldn’t put the U.S. economy back together.

Donald Trump says that he, personally, has already made America great again. What will the next crash do to the great entertainer and his reputation?

We presume we will see.

And Ney? Everything went bad… But his statue still shows the unblemished energy of a real soldier.

When we read Ney’s exploits during the French Revolutionary Wars and Napoleonic Wars of the late 18th and early 19th centuries, battle after battle… mad cavalry charges… slashing sabers and booming cannon… wounded again and again in nearly constant fighting over a 20-year period…

…across the barren steppes of Eurasia… the mountains of Spain… the deserts, wastes, towns, and fastnesses of Switzerland, Italy, Germany, Poland… and France itself…

…we hold our breath, as if it were not possible that one man had done so much.

What sort of man was this? What meat did he eat? What wine did he drink? Ney was almost superhuman… perhaps a demigod of war created by Mars himself.

Back then, battles were matters of life and death, with the commanders often on the frontlines.

Ney, on horseback, pulled out his sword and rode straight towards the enemy muskets. How today’s Deep State warriors – such as Generals David Petraeus and Keith Alexander – must hold their manhoods cheap in comparison!

Never in real danger and never short of air-conditioning and Coke, their toughest battles were fought on the carpets of the Pentagon.

And then, after long careers filled with “surges,” lights at the end of tunnels, and other claptrap, the grateful nation sent the two counterfeits to enjoy the rich rewards of Wall Street.

Not so for Ney. He enjoyed no comfort-controlled duty assignments. No attractive, fawning reporters – to whom he could reveal military secrets – accompanied him on campaign. And no grateful nation provided a sinecure. Instead, it shot him.

It was amazing that Ney survived so long. He was captured by the enemy at Neuwied in modern-day Germany… and slept out in the open in Russia in temperatures of -30 degrees Celsius. He was wounded many times – thrown from his horse… sliced by swords… and struck by cannon and bullets in the thigh, wrist, and neck (any one of which should have put him under the earth).

In the Battle of Waterloo alone, he had five horses shot from under him. He even managed to get out of Russia after Napoleon’s ill-fated invasion… commanding the rear guard in a catastrophic campaign where 90% of the troops died.

Legend has it that he was the last French soldier to cross the bridge at the Berezina River, firing his musket as he beat a retreat… before the bridge was taken by the Cossacks, who proceeded to massacre as many as 10,000 French and Swiss troops left behind.

Napoleon had planned to retreat from Russia into Poland, crossing the Berezina.

The river should have been frozen solid at that time of the year. The French had counted on it. But a thaw left it uncrossable. They were trapped, with three Russian armies converging on them.

Immediately, bridge builders leapt into the water to construct a 100-meter bridge.

A man could survive for only about 30 minutes in the freezing river. Most of the builders died quickly. But somehow, they managed to put together a bridge, allowing the Emperor and much of his army to cross.

Still, the French lost as many as 40,000 troops and stragglers in the battle.

Even today, “Berezina” is interchangeable with “disaster” in French.

Most of Napoleon’s marshals went on – shrewdly – to betray him. They opened their eyes and saw it was time to change camps. But not Ney.

Napoleon had been shipped off to the Isle of Elba, leaving the French to rebuild the nation under another Louis. But the Corsican escaped from Elba and was soon back on French soil, with another army no less.

Blinded by loyalty or miscalculation, Ney – who had pledged obedience to the king in the meantime – rallied to the Emperor’s cause and joined the last campaign, of the “hundred days.”

Then, it was Michel Ney, the Prince of the Moskva, of course, at the front of the magnificent cavalry charges at Waterloo, waving his sword and urging his men on against Wellington’s cannon, which he briefly managed to capture.

Alas, with the Prussian Blücher arriving from the east, like a hammer coming down on the English anvil, Napoleon realized that the situation was hopeless and gave the order to retreat.

And then, it was over. Soon, Napoleon was captured… Ney, too.

The Emperor was sent to Saint Helena, an island so remote and so inaccessible, there was no hope of getting away.

Ney was tried for treason. Found guilty in 1815, the only concession the new government granted France’s greatest hero was that it let him command his own firing squad. He did so as follows:

Soldiers, when I give the command to fire, fire straight at my heart. Wait for the order. It will be my last to you. I protest against my condemnation. I have fought a hundred battles for France, and not one against her… Soldiers, fire!

The soldiers, some in tears, pulled the trigger as they had been commanded.

Today, we feature another insight into the ballooning government debt figures.

The average interest rate on U.S. national debt has plunged over the past 10 years…

That’s the story of today’s chart, which maps the average interest rate on national debt in 2018 against the average rate in 2008. 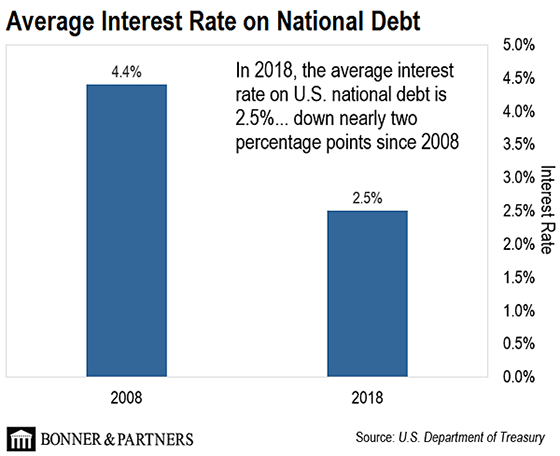 This plunge can largely be attributed to the Federal Reserve’s “easy money” policies, which injected money into the financial system to lower interest rates in the wake of the 2008 financial crisis.

But as Bill has written many times, while the interest rate paid on U.S. national debt has been roughly cut in half over the last decade, the amount of debt itself has doubled since 2008.

Now, every 1% increase in the cost of U.S. national debt will increase the government’s annual interest expense by more than $150 billion. That’s 50% more than the feds spend on infrastructure and disaster relief each year.

Is Trump Right About Quarterly Earnings?
Recently, the president suggested that companies should report earnings semi-annually, rather than quarterly. In theory, it would allow companies to focus on long-term goals without having to hit Wall Street’s short-term expectations every three months. But does it also deny investors transparency?

The Coup at Google
Google wants to do business in China. In order to do that, the Silicon Valley giant signaled its willingness to censor search results unfavored by the Chinese government. Google’s management seems to be on board. The employees? Not so much…

How Big Tech Kills the Bull Market
The so-called FAANG stocks have had an outsized influence on the bull market. As of July, the Big Tech stocks accounted for all of the year-to-date gains of the S&P 500. But Dan Denning, Bill’s coauthor on The Bill Bonner Letter, sees three threats to the tech giants. And when they fall… they’ll bring the rest of the market down with them.

A very disappointing perspective, which, as we all know, is subjective. I expected better, but in the era we live in, money is our God. May God bless our nation.

You must have a lot of liberal readers. I think you also must be trying to stay halfway okay with the socialists when they get into power. I think President Trump is only one cog in the process. But make no mistake, the one, true living God put him there.

Every day, you display your lack of understanding, or partisanship with the Deep State elites, by bashing Trump. You are probably not an idiot, so I must assume you are gaming your very rich, elitist clients. It is obvious what Trump has done to unleash the very efforts of the people of which you speak.

He has – yes, mostly by himself – done much to restore the very grassroots efforts of the people and the infrastructure necessary to make real improvements in productivity. Has he fully resolved the problems of 100 years of socialist and other criminal attacks on America? No, but his solutions are more than cosmetic. Your observations are stupid and not helpful.

No, one man can’t make it happen; but a president’s policies can be good for business or bad. Obama’s were terrible, but then again, he hated business as he hated America. It can be said that Trump allowed free markets to work where Obama tried to suffocate them.

Get the full story right here… 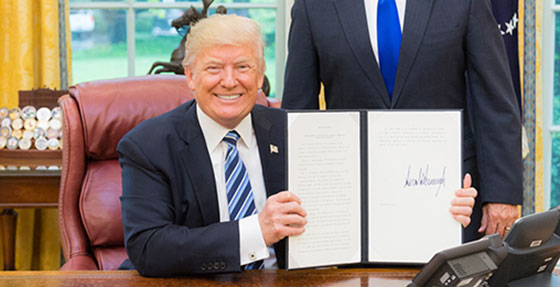