You, who cannot promise yourself a single day, who are only a pilgrim here below, does it belong to you to decide such affairs? You are the master neither of your property nor of yourself: you and your estate, all these things, belong to your family; that is to say, to your ancestors and your posterity.

“What if The Donald is really serious about this trade war?” they asked themselves.

Some of our most trusted colleagues believe he will go Full Retard on Friday, imposing a 25% tariff on another $200 billion of Chinese goods.

But here at the Diary, we are as calm as a corpse. For while we are ready to believe that he is a “total economic ignoramus” with not even “a vague clue about the economics of global trade,” as our colleague David Stockman puts it, we are not ready to believe he is a complete fool.

The New York Times somehow got a hold of the president’s tax returns from the late 1980s-early 1990s. They reveal what we always suspected – The Donald is a much better politician than he ever was a businessman or dealmaker.

Practically every deal he made in the period was a disaster. He lost more than $1 billion, say the headlines. Close to bankruptcy, he saved himself – according to the report – largely by manipulating stock prices.

That is, he pretended to be a corporate raider… buying shares and putting out the word that he intended to launch a takeover.

This led gullible speculators to buy, too – counting on the billionaire to drive up the stock’s price as he fought for control. Then, Trump quietly sold his shares as prices rose.

Yesterday, Mr. Trump must have been watching the stock market sink; the Dow dropped as much as 648 points intra-day.

He knows stocks go up and down. And he fully intends to blame the next downturn on the Fed.

So most likely, tomorrow, he’ll claim some sort of interim “progress” in talks with the Chinese… talk tough… and put off doing anything that might cause a major selloff.

We’ll have more on the trade war tomorrow… leaving us 24 hours to think about it some more.

In the meantime… we take up a small matter, leading… like a fuse to a bomb… to a big one (as signaled by Plato above).

A dear reader objects to our use of the “royal we”:

Hello Bill, for the most part, I enjoy reading your Diary. However, I do find your use of the “royal we” in all your writings very off-putting. Even though I’m Canadian, I despise the monarchy, and I’m sure that many in your great republic to the south share my feelings on this. Am I missing something? Has it already been explained, perhaps? If not, what is the rationale for this?

The Queen uses the “royal we” to signify that she is not speaking for herself, but for the Crown… an institution that was around for hundreds of years before she was born and will, presumably, outlast her by hundreds more.

Here at the Diary, we do not use the “royal” we. We use the common we… a plebian, down-market, gutter kind of we, with no pretension to grandeur, nor even mediocrity.

For here we are, writing from a house we didn’t build… in a country that is not ours… wearing clothes we didn’t design… looking out on rain we didn’t cause…

…and passing along ideas that are not original. Even when we think we have had a new idea, we discover later that someone had the same idea 2,000 years ago.

Not one molecule in our body, thought in our brain, or feeling in our heart is of our own making. It would be vanity to use first-person singular; there is nothing singular about who we are or what we do.

No, we have neither scepter nor orb; all we have is a laptop computer.

We wear no royal purple. We favor brown and grey; we dress in dull colors so we may think in vivid ones.

We have no throne, no influence, no privilege, no position, and no armed guards to protect us.

We speak not for the Crown, but for all those common people who try to put two and two together…

…all those tortured poets whose songs we have misunderstood and misused…

…all those scientists, statisticians, and economists whose numbers we have hijacked and abused…

…and all those generations that have come before us and – by bad luck, bad manners, and bad judgment – learned painful lessons so we might be spared from learning them again…

As time passes – and here, we flatter ourselves, perhaps, by thinking that we think more clearly – the conceits of youth… the illusion of timelessness… the passions and competitions – to have the biggest bank account, the biggest car, the biggest house, the biggest muscles, and the biggest you-know-what – all get dropped along the way, like discarded pianos on the Oregon Trail.

All that is left is the shriveled up, naked reality… of time and love.

And most of all, we use “we” in sympathy with all those sinners, half-wits, and jackasses that time and love destroyed completely… they who felt most intensely and horribly the vacant truth… leaving their poor, tortured souls writhing on some ashpit in Hell.

Wisdom comes at a price; we get older. But some people pay dearly… and get little for their money.

We are talking about two of the oldest and most celebrated people in the financial world – Warren Buffett and Charlie Munger.

Mr. Buffett was right about time and love. Those are the things that really matter. But they are both wrong about what they claim to understand best.

Tune in tomorrow for more…

That’s the story of today’s chart, which tracks the probability of recession, according to the New York Federal Reserve, going back to 1992. 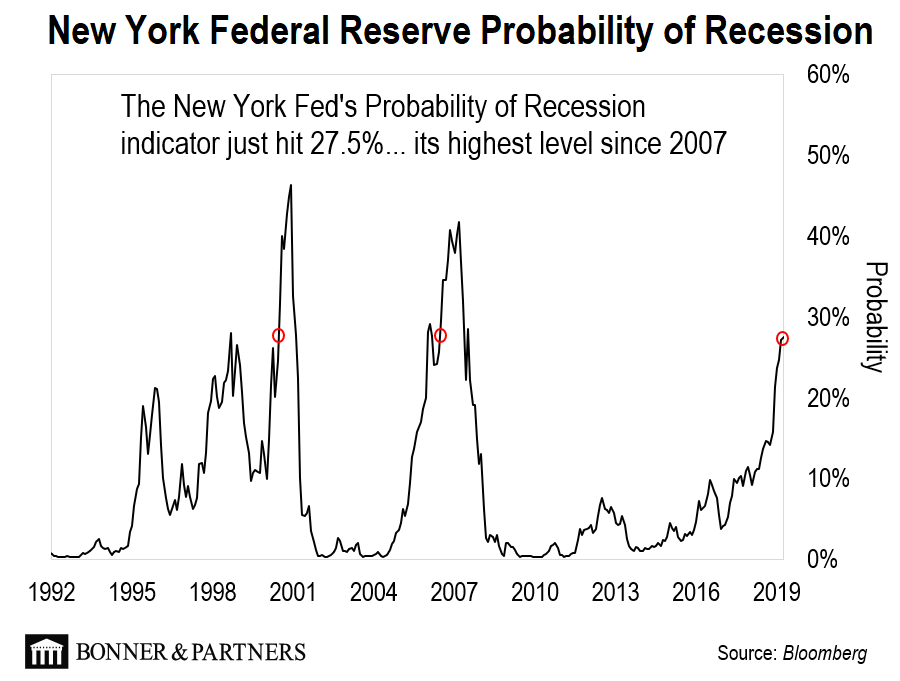 The New York Fed’s Probability of Recession indicator is based on the spread, or difference, between the yields on short-term and long-term U.S. Treasury bonds. That’s because these yield curves have been a leading indicator of tough economic times – as we have discussed before.

And recent history suggests that this level is the point of no return. The last two times the indicator passed 27% on the way up were August 2006 and July 2000… In both cases, a recession hit within 8-16 months.

This reading from the New York Fed lines up with what we’re seeing from our proprietary early-warning system. The Doom Index raised the crash flag on April 24.

When the Fed agrees with us here at the Bonner & Partners office… well, it’s probably not good news for stocks.

This is just another reason to be cautious today.

The Disturbing Trends of the U.S. Consumer
While President Trump touts a booming economy, it seems the U.S. consumer is struggling. Whether it’s due to a decline in personal income or a struggling household sector, it’s beginning to look less and less like an expanding economy. In other words, it’s almost as if Trump’s tax cut never happened…

Nobody Knows What to Do About Facebook
Lawmakers continue to call for the Federal Trade Commission (FTC) to bring down the hammer on Facebook. Currently, the expected settlement between the Big Tech giant and the FTC sits around $3 billion to $5 billion. But, for a large company like Facebook, that’s just a slap on the wrist. Is breaking up Big Tech the only way to stop companies like Facebook?

A Sneak Peek of Bill’s New Book
Regular readers will recall that Bill has been hard at work on his newest book, Win-Win or Lose. He’s spent years researching and writing it. And after much anticipation, Bill’s manuscript is finally ready. But before we ship it off to the printer, we wanted to give Diary readers a sneak peek…

Thank you, Bill. Your most eloquent sneak peek article resonated with my own views on life, which I could not have hoped to distil so well as you. I have thought a great deal about how to achieve social development, and worked out how a better PayPal design does that, while achieving better privacy instead of introducing Orwell’s 1984 or China’s social credit system. Unfortunately, our politicians are technophobes, so I’ve been unsuccessful in breathing life into the project.

Bravo! Great title for a much needed book. The title alone will get it bought and read…

Thank for for launching “further reading.” Creative thinking and writing is ever challenging and appreciated. Looking forward to your thoughts. I appreciate, believe, and celebrate your efforts.

You are so, so right. I print and save your Diaries for further reference and revisiting of two of my favorite countries, Ireland (I’m Irish-American) and la Argentina, or the Argentine, as the British called it. I’m also from a five-generation California cattle ranch, so I grew up with people who looked like you as a caballero. Keep up the fight and don’t give up the adventure…

And another reader brings the conversation back to The Swamp…

Once again, Bill, you are spot on. I know it sounds like conspiracy, but have you given any thought that this is what The Swamp wants? To bankrupt people and make them poorer each year. To make economies collapse so they can control them more. Regime changes to put puppets in. The more we head down this slope, the more I see no other side. Trump is like the rest of them – knee deep in muck. The older I get, the more I think this is their plan.

Two classes of people: extremely rich and extremely poor. It’s never worked before, so I can’t see why it would work now. But hey, The Swamp is known to forget lessons and keep trying the same things. Isn’t this the definition of insanity?

Sometimes, the market just seems unpredictable. But what if you could make money whether the market goes up, sideways, or even down?

After six months of research, this investment guru and his team are revealing a new way you can make fast cash, even when stocks crash… This could make 2019 the biggest money-making year of your life.

If you’d like to get in on this “best-kept trading secret” of the Wall Street 1%, read on here. 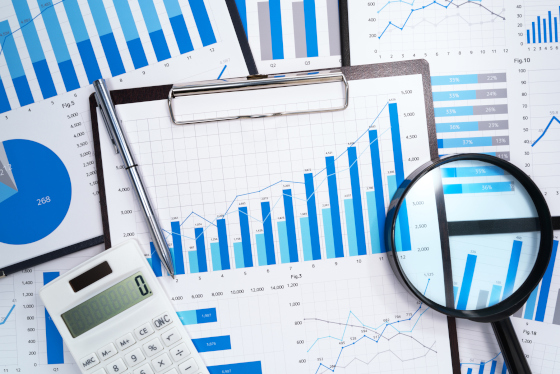