ON THE CELTIC SEA – We drove up to Cherbourg yesterday, boarded a ferry, and are now cruising towards Ireland. The trip takes nearly an entire day, but the wifi works onboard… so we were able to stay in contact.

Aboard the Oscar Wilde

It can be a miserable crossing for someone who gets seasick easily. But the sky was sunny when we got on board, and the trip has been smooth. We have only a couple more hours to go; we are approaching the Irish coast already.

The ship is full of children – French teenagers who are going to Ireland. There must be at least a hundred of them. They are everywhere… and they are always in motion.

We sat in the bar this morning, drinking a cup of coffee while watching them go by. One way… then the other. In twos and threes. Some walking. Some running.

Where were they going? We are on a ship; there is nowhere to go. But they couldn’t sit still. Instead, they wandered up and down, round and round… talking, laughing.

We pitied their poor chaperones, who tried to keep them quiet and under control. Whoever invented school trips must have done so to torture them.

Below… we follow up on how the feds are bankrupting America… and why a stock market crash, a bear market in bonds, and a depression are now probably inevitable.

The International Monetary Fund (IMF) now predicts that the U.S. government debt load will be worse than Italy’s by 2023. This will put America in second place, just behind Japan, in the race to go broke. It is expected to have a debt/GDP ratio of 117%.

This IMF forecast assumes that things will go well. That is, it assumes that there will be no shocks or unexpected developments. But we have already gone a long time without a recession – 109 months. The record is 119 months.

Most likely, a recession will begin… fairly soon. Then, all the estimates will be tossed aside and replaced with much worse numbers.

Instead of a $30 trillion debt in 2028, for example, the debt will explode to $40 trillion… or even to $56 trillion, as one of our Dear Readers forecasts.

But even as things now stand, extrapolating only budget projections and visible trends, the federal government is already programmed for bankruptcy. Yes, it can “print” money to cover its debts, but this is just bankruptcy masquerading as inflation.

That’s what happens when receipts habitually fail to meet outlays and debt rises faster than the economy that supports it.

Some will want to blame Donald J. Trump immediately. But let’s not rush to judgment. The disease was well advanced long before Mr. Trump appeared at the craps game with his MAGA cap.

The desire to balance the budget is described as a “conservative” attitude. But “conservativism” only makes sense in a world of scarcity. If you’re going to live forever anyway… why bother with an estate plan?

Even at today’s Fed Funds rate of 1.69%, the real rate of interest is less than zero. Because consumer prices are rising at about 2% per year. The Fed’s money is free (to member banks, of course).

Even at nominal yields, there is still some $7 trillion in bonds worldwide trading below zero. For nearly three decades, this new money has seemed to be unlimited.

Together, central banks have increased their holdings by $17 trillion over the last 10 years. That’s money that didn’t exist before.

This gush of liquidity did remarkable things to the economy. Chiefly, it shifted the focus from making things and earning money… to consuming things and speculating with credit.

The price of financial assets rose, while the price of the working man’s time stayed about the same. The resulting “wealth effect” made it seem benign.

But it was malignant. And it gave the feds the wrong idea – that deficits really don’t matter because there is an almost unlimited amount of money for them to borrow.

The illness was entering its terminal phase even before Donald J. Trump was elected. But his ascendance seemed to give some people hope.

He promised to “drain the swamp.” In an era of mealy mouthed, double-talking politicians, Mr. Trump sounded direct… almost honest. Maybe he had a cure!

The difference turned out to be mostly aesthetic. Instead of normal TV programming… we got Mr. Trump’s reality TV, in which things are staged to look as though they aren’t staged.

And instead of Deep State insiders calling the shots, we now have an administration that pretends to be fighting the elite, but is even more enthralled to the insiders than its predecessors, largely because it has no idea what else to do.

By 2022, the U.S. government is projected to spend almost as much money on interest payments for its massive debt as it will on the Pentagon, more than $600 billion every year.

The spiraling expense underscores a frightening reality in Washington: President Trump and Congress have not only massively expanded the U.S. government’s debt, they have broken free of multiple guardrails intended to keep budgets balanced, freeing future lawmakers to further expand the yawning gap between what the government takes in and what it spends.

But $300 billion is a lot of money. That’s on top of the $700 billion already authorized. And it comes as the Fed tries to reverse course.

Instead of enabling the feds’ fantasies by buying their bonds, for the first time in 30 years, the Fed is selling bonds.

The combination of frauds and foolishness undoubtedly deserves an “extreme warning.” It may or may not be imminent. But it is surely inevitable.

P.S. You may have heard of our estate in Nicaragua – Rancho Santana. It’s nestled up against some of the most beautiful Pacific coastlines in all Latin America. We bought the property more than 20 years ago. Back then, the government wasn’t very accommodating to private property rights… or foreigners. But the people were warm, and the views spectacular.

I mention this because there’s been a development down at Rancho. Rather than hear it from us, we’ll let our daughter Maria tell you the whole story.

U.S. stocks have gotten off to a rough start this year… partly due to trade war fears. Despite its recent rebound, the S&P 500 is still 6% off its January high.

But for some perspective, Chinese stocks have fared even worse in 2018.

Today’s chart follows the Shanghai Composite Index – which tracks all stocks trading on the Shanghai Stock Exchange – from the start of 2017 through today. 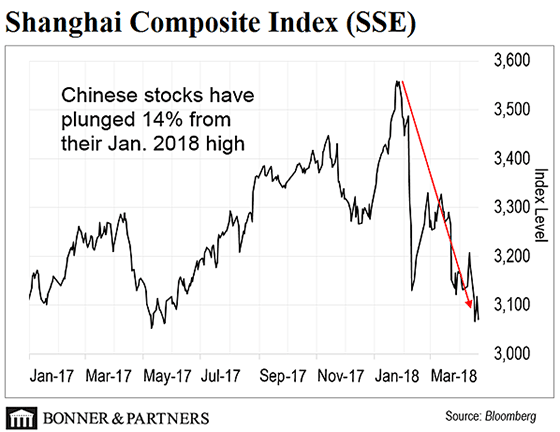 As you can see, Chinese stocks have plunged 14% from their January high. That’s more than double the S&P’s fall during the same time.

The End of Tesla?
Electric car maker Tesla is one of today’s trendiest companies. But as Bill showed recently, the company is a classic money-loser. And with Tesla missing production deadlines and burning through cash, some analysts are worried that the end is near…

Blockchain’s Next Target: Global Shipping
For the past few months, Jeff Brown, Bill’s top technology expert, has been showing dear readers the benefits of blockchain, the technology underpinning cryptocurrencies. But the tech is no longer just for bitcoin… Here’s one example of how it could change our world forever.

How to Bulletproof Your Portfolio
Stocks have been more volatile thus far in 2018 than they were in all of 2017. In these turbulent times, you need a plan. Chris Mayer, one of Bill’s top analysts, shows how you can chaos-proof your portfolio.

In the mailbag, readers consider what would happen when disaster strikes…

Here’s a thought: If the U.S. becomes the next Venezuela, maybe Mexico could use Trump’s iron curtain to help prevent a flood of gringo refugees from overwhelming that nation. Thank you, Donald!

I hate to point this out. Yet, it must be done. Regarding fleeing/bugging out/going to a bolthole, it isn’t going to happen! Why haven’t people figured out that the nationwide four-strand steel median crossover barriers make it quick and easy to isolate every city in the country? All “they” have to do is stop half a dozen cars carrying the first bug-outers, take their car keys, and start them walking back. No one will be going anywhere. As you so brilliantly opined: we are skint.

Meanwhile, a reader explains why deficits are the least of our troubles…

It does not matter “why deficits don’t matter” and all the financial predictions we are considering because they are very small potatoes compared to the greatest disaster to ever hit the Earth. It is the Grand solar minimum that has begun and will change everything as we know it. It has been observed by the top scientists around the world that the sun has started its 206-year cycle, where it has started to hibernate and put out less energy and magnetic protection.

We will have much colder weather, and more earthquakes and volcanic eruptions all over the world. The last time this happened, the world was far less populated, without large cities with tall buildings, and we were not completely dependent upon electricity. It is predicted that almost 50% of the world’s population will die during this disaster that can last 40 years or more. If we lose electricity for a long duration, that percentage of deaths goes up to 90%.

Why is no one, including you, warning us about it so people can get prepared? The history of these solar minima goes back for millions of years and they coincide with the fall of great empires and civilizations. I hope you will cover this in the Diary and get things started.

Did President Trump just save the legal marijuana industry?

In case you missed it, be sure to read Nick Giambruno’s “market insight” from yesterday. Go here.

And be sure to join Nick and Doug Casey at the “Pot Stock Millionaire Summit” on April 26 at 8 p.m. ET. Nick will show you why the next boom in legal marijuana could potentially make you a “marijuana millionaire.” Reserve your spot to this free event right here. 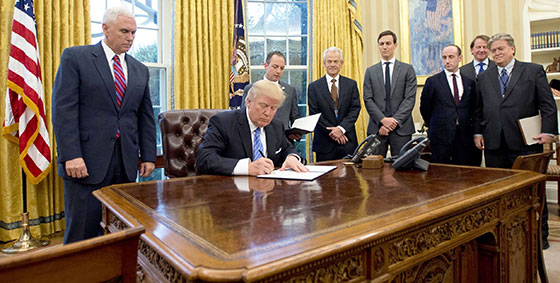