He’s a regular contributor to Bill’s monthly letter, The Bonner-Denning Letter. And for the last two years, Tom and his ex-wife and three kids have traveled the world, living out of a suitcase. His Postcards From the Fringe newsletter, all about their travels and his big-picture market insights, is one of our most popular e-letters.

But before he left on his travels, Tom sold everything and put his entire life savings into gold. In this weekend’s guest edition, he explains why…

The stock market is manic-depressive. It swings from oversold to overvalued every generation or so.

The simplest market-timing system, therefore, is to be a contrarian.

Our Contrarian Idea in Action

I first understood this idea at school, when I began studying the Crash of ’29 and the Great Depression in history class.

I was just getting interested in investing. I bought my first stock at age 11. And the above idea has been my “guiding star” ever since.

The chart below shows that contrarian idea. It tracks the P/E ratio of the U.S. stock market going back 120 years.

(The P/E – or price-to-earnings – ratio measures how much investors are paying for every $1 of a company’s earnings.) 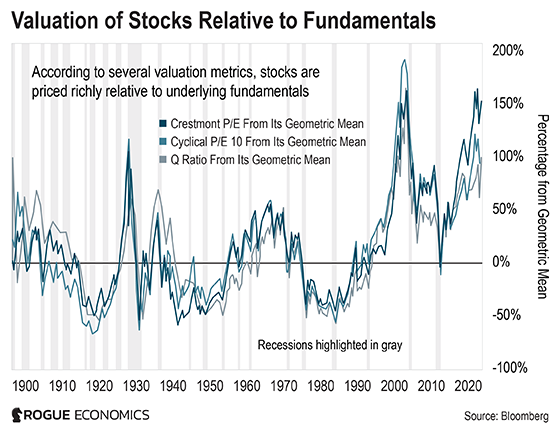 You don’t need to understand everything that’s going on in this chart.

Just notice how valuations have oscillated around the mean (the horizontal black line). They’ve been moving between overbought and oversold.

And notice the towering peak in 1999.

It was with this perspective that I watched the tech-stock mania… and the subsequent bursting of the bubble in 2000.

The internet and technology had caught the public’s imagination.

Taxi drivers were recommending stocks. Grandmothers were forming investment clubs. And the press was talking about a “new era” in which stocks would never fall again…

“This is straight out of the textbooks,” I thought at the time. “A classic mania.”

I didn’t have any money to invest back then. I had just graduated from university.

But I did have the insight that this moment would positively, absolutely mark the beginning of a new market cycle…

Long Walk Down the Mountain

I understood that stock valuations had begun a long walk down the mountain to being undervalued/oversold. (You can see that from the sharp decline in valuations in the chart above from 2000 to 2010.) Let’s call this downward march the “primary trend.”

Since then, the primary trend got waylaid. It spent eight years backtracking in a countertrend rally… eight long years of fake money and rising stocks… before reversing course once again and resuming its downward trend in late 2018 (you can see this downtick near the right-hand-side of the chart above).

I’ve been bearish on stock market valuations the whole time. And I’ll continue to be bearish on them until we reach the cycle trough. If my hypothesis is correct, the prescription is simple: sell stocks, buy gold.

Why gold? Have a look at this chart. It tracks the gains in gold prices and the Dow since 2000… 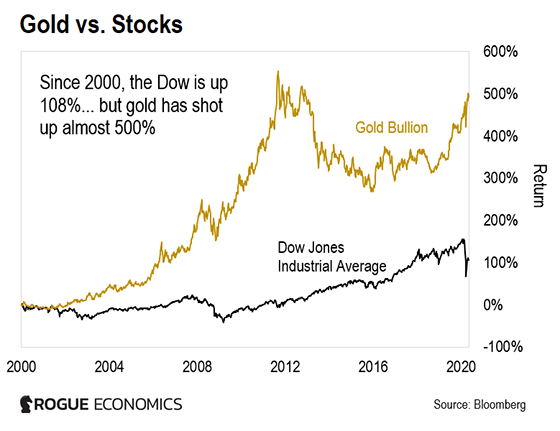 You can see that since valuations started their long walk down the mountain in 2000, gold has outperformed stocks 5-to-1. When we reach the cycle trough again, it’ll be time to sell gold and buy stocks.

But how do we know when we’ve reached that point? For that, I follow the Dow-to-Gold ratio.

The Dow-to-Gold ratio is the ultimate barometer of systemic “health.”

You buy stocks when they are cheap relative to gold. That is, when the Dow-to-Gold ratio is below 5 (when it takes five ounces of gold or less to buy the entire Dow).

You sell stocks when they become expensive – when the Dow-to-Gold ratio rises above 15 (when it takes 15 ounces of gold or more to buy the entire Dow). So you sit in gold until stocks become cheap again (in gold terms).

Over the last 120 years, whenever the system “reset,” the ratio went below 5. Stocks were cheap, relative to gold.

On the flip side, when things were ripping – as they were in the late 1990s, for example – the ratio got as high as 41. Stocks were expensive, relative to gold.

And the thing about this barometer is that once it begins a trend, it tends to stay in that trend for many years. 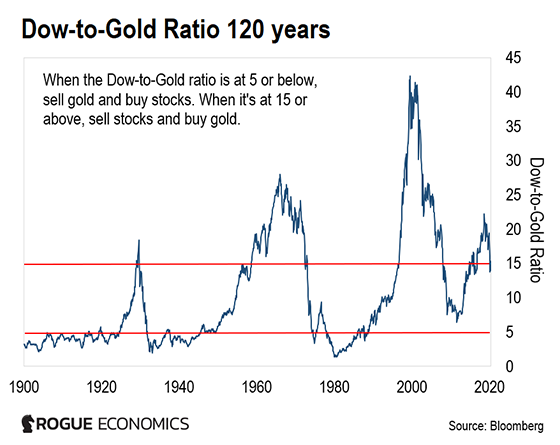 Notice how well this chart lines up with the valuations chart I showed you earlier. For example, the high in the Dow-to-Gold ratio in 1999 (when it took more than 40 ounces of gold to buy the Dow) mirrors the towering peak in stock valuations… right before the dot-com crash in 2000.

At its most recent high in October 2018, the Dow-to-Gold ratio was just above 22. It’s been falling ever since… a signal that the system is going to break soon. Maybe it’s started to break already?

Since the outbreak of the coronavirus pandemic, the government has gone into hyperdrive trying to “manage” the economy – with more financial engineering, more unsound money, bigger deficits, and more soothing words…

As I write, the Dow-to-Gold ratio is at 13.9. I expect it to fall below 5 – what Bill Bonner calls its “rendezvous with destiny” – in the next five to 10 years.

Until then, we’re sticking with gold.

P.S. Don’t just buy bullion. I’ve created an entire trade to take advantage of this opportunity. I’ve invested nearly $1 million of my own money into this strategy. And on Wednesday, May 20, I’m sharing the details in a special briefing.

Bill will even be joining in from his ranch in Argentina. To make sure you don’t miss it, reserve your spot right here.