Editor’s Note: On Thursday, geologist and professional resource analyst Dave Forest showed you how gold protects your wealth during times of crisis. But gold can be more than just an insurance policy.

Today, Dave shows why he sees a boom coming for gold miners, and reveals why you’ll want to stake a claim for this “wild ride.”

I regarded the man for a moment. His business card was written in Sino script, but it turned out he was an American who had set up shop in Hong Kong several years ago… And was now riding a tidal wave of money.

This was my fourth sit-down of the morning, and the ultra-high grades from my mine had caught this mysterious man’s eye.

I knew my numbers were real. But I wasn’t sure about his.

“Tell me what you do again,” I asked. He leaned in, giving an air of conspiracy and said, “I buy mines. Then sell them to our colleagues in Mainland China.”

So he was a middleman. He was asking to buy my project for tens of millions of dollars so that he could resell it for a presumably much larger sum to bigger Chinese investors.

“We are in the process of going public,” I said, still unsure whether to believe what he was telling me.

“Don’t do it,” he repeated, standing up and tapping his card to reinforce the point. “We’ll buy it now.”

Then he was gone.

A buyout offer like that would be unthinkable in North America for a development project – albeit a good one – like mine, in its early days of launch.

It sounded too good to believe… But the next day, it happened again. Halfway through my project presentation, a local fund manager said, “Would you sell the whole thing? Now?”

These sort of offers mean only one thing: There is a global boom in mining mergers and acquisitions (M&A).

In September of last year, for instance, major gold miners Barrick and Randgold announced one of the largest mining M&A deals since the 2013 downturn in gold prices – agreeing to a $6.5 billion merger.

Then, in January of this year, Newmont Mining Corp signaled that they would be acquiring Canadian miner Goldcorp for $10 billion.

And have a look at the list below. It shows some of the largest mining M&A gold deals since 2013.

What do you notice about the above list? Eight of the 11 deals have come in the past three years. This is a sign that industry insiders are gearing up for a sector resurgence.

And keep in mind, these are full-corporate acquisitions. If we add in project level investments, there’s even more recent activity to show how things are ramping up.

In April 2017, for example, China major miner Shandong Gold Group agreed to buy 50% of Barrick’s Veladero mine in Argentina for $960 million.

That deal was followed by more investments between these two firms in September of this year – when Barrick and Shandong Gold announced each would buy $300 million worth of the other’s stock.

You may be wondering, why the dramatic rise in M&A activity?

Buyouts tend to increase when corporate valuations are low – meaning that companies believe they can acquire new resources cheaper by buying them than by discovering and developing them.

That’s certainly the case in the gold sector today. Just look at the chart below, which shows average valuations for gold companies that hold in-ground gold reserves and resources.

Across all categories of ounces (inferred, measured and indicated, and global resources – along with proven and probable reserves), valuations have dropped significantly. 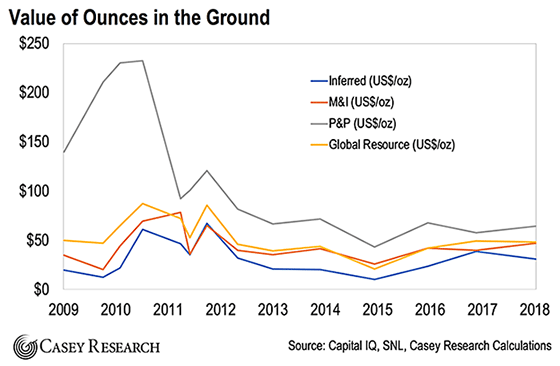 There’s a strong incentive right now for mining executives to “go shopping” for ounces in the ground through corporate acquisitions.

And that’s a great thing for investors.

I believe we are just at the start of a monster bull market for commodities.

These guys sense that gold is cheap at current prices. And they have a good track record of calling upturns in the market.

And the “money on” mentality in China, as demonstrated by the two offers I received to buy my projects, is particularly interesting. The last big Chinese funding round was in 2004 or 2005, which was when the last cycle was just getting started.

It all points to one thing: Higher gold prices and a boom in mining stocks.

The old-guard industry analysts Tudor, Pickering, Holt & Co. said the recent flurry of acquisitions “only represents the tip of the M&A iceberg that will emerge in 2019.”

As these insiders summed it up: “Buckle up as the upstream merger train has left the station and next year will likely be a wild ride.”

Luckily, my team and I have developed a patented satellite technology. Using this “Digital Treasure Map,” we can pinpoint which companies are sitting on a literal goldmine before a shovel ever goes into the ground. Sound too good to be true? I’ve compiled all my evidence. See the proof for yourself right here.