Our colleague James Wells sent a report from The New York Times. It told us that the central bank of Argentina wasn’t fooling around.

Instead of pussyfooting with 0.25% per quarter rate hikes like the Fed, it is moving fast and furiously with a hike of 12.75%.

Uh oh. We have fairly large investments (for us) down in the land of gauchos and gigolos.

Is Argentina headed for another financial crisis?

One thing you can depend on in the financial world is that you can never depend on anything.

But it takes time.

In the early 20th century, Argentina was the seventh-richest country in the world, richer than most of Europe.

Estate owners from the pampas owned elegant houses in London and Paris. There, they entertained lavishly and lived extravagantly. The locals introduced their daughters to them, whispering… “He’s as rich as an Argentine.”

And it wasn’t too long before the poor and middle classes were ready to vote for someone who promised a new deal.

That was Juan Perón, a military officer who had been sent to Italy to study Mussolini’s new system.

The resulting political battle pitted the rich, traditional, landed gentry of the countryside against the young, urban, left-leaning working classes of Buenos Aires.

And Peronism – a blend of socialism, militarism, and crackpotism – ruled Argentina for the next 70 years, until Mauricio Macri narrowly won the Casa Rosada in 2015.

Going the Other Way

Since then, Macri has tried to steer the country away from Venezuela and back towards a “normal” market-based economy.

That trend is not unique to Argentina. After tasting the bitter fruits of win-lose deals for so long, all of South America seems to be headed towards freer markets.

Meanwhile, the original champion of free markets – the U.S. – is going the other way.

The U.S. may have fallen for demagoguery, but Latin America is enjoying a democratic wave… The appeal of military rule has gone. Nobody supports that anymore…

Socialism also no longer has any real traction… This is a great step forward.

Argentina is leading the charge. It cut inflation in half in the first years of Macri’s administration. And stocks recorded a 77% gain in 2017, making Argentina one of the best-performing stock markets in the world.

But it is not easy to go from win-lose to win-win.

In Argentina, for example, the government has diddled prices for so long that releasing them to the free market causes shake-ups and resentments.

Inflation reached 45% under the last government. That was a large part of why it was defeated. But now, a friend in Buenos Aires reports that his electricity bill rose by 1,000% when the feds eliminated price controls.

There were bound to be problems. And they showed up, big time, last week.

In one day, the price of the peso in dollars fell 8% – a huge move for a currency. That prompted the rate hike we mentioned earlier.

But it didn’t stop the peso from falling more. It fell a total of 13% in 13 days, increasing prices on imports and putting further strain on Macri and his team.

Hard to say. Macri is going in the right direction, but there is no guarantee that he’ll be able to continue. The socialists, activists, meddlers, do-gooders, and world-improvers… even the originarios… are all trying to stop him.

Update From the Ranch

So… what does this all mean for our ranch in northern Argentina?

“This drop in the peso is bad for the economy, but it is good for us,” our local consigliere explained. “We get our money in dollars. And now, they go a little further.”

The dollars come, Dear, Dear Reader, from selling our wine to Americans.

That is, to you. As we explain here, it’s almost impossible to make money on such a high, dry, remote cattle operation.

Selling our wine directly to our readers is just about the only thing that keeps the farm in business. And, as you will see, our very small-quantity, very high-quality, and extremely high-altitude Malbec is not only one of the best wines in the world… it is one of the healthiest.

The Argentine peso may be in freefall, but the U.S. dollar is gaining strength…

That’s the story of today’s chart, which tracks the U.S. Dollar Index – which measures the value of the dollar against a basket of foreign currencies – from January 2017 to today. 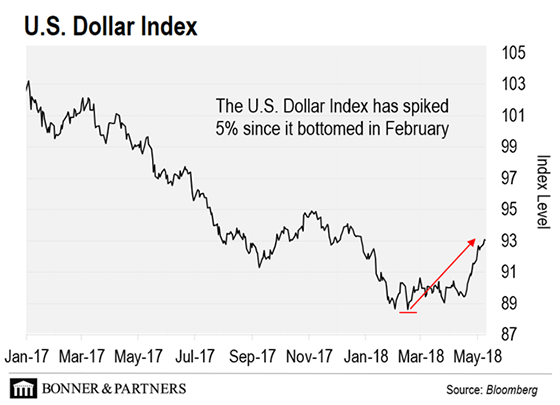 As you can see, the U.S. Dollar Index tanked in 2017… and it kept falling at the start of 2018, bottoming in February. The dollar lost 14% of its value against the foreign currency basket in that time.

But the U.S. Dollar Index has spiked 5% since then.

Argentina’s “Hail Mary” Play
As Bill reported, Argentina is in trouble. The currency is sinking as inflation takes hold. But President Macri seems to have a plan to deal with the problem: a $30 billion loan.

Solar Panels: Soon Required in California
The state of California is going all in on renewable energy. California is set to become the first state to require solar panels on all new houses. A step in the right direction? Or a step too far?

Volatility Is Here to Stay… Here’s How to Profit
Volatility is back, and it’s not going away. But while some investors are nervous, master trader Jeff Clark couldn’t be more excited. Volatility means big swings in stock prices. And for traders, that means quick gains. Here’s how to do it.

Bill recently reported that he has become homeless. That’s sparked discussion in the mailbag…

Homelessness isn’t something you should joke about. Homelessness is seen in the form of rudimentary shelters built by the side of major highways here in Honolulu. Maybe you should contribute some of your millions acquired through subscriptions to help those who are truly homeless. How about a few million to help those losing their homes due to Madame Pele letting loose on Hawaii?

How fortunate for you and your family that you can remodel your home in Dublin, become “homeless,” and travel around Europe while that is happening. Perhaps you wish Hillary had become president and the news media could report all the good things she was doing. (Talk about fake news.)

An article I read last week says the court system in Denver, Colorado that handles evictions is being inundated due to the amount of people who can’t afford the rent/mortgage. Your predictions may be materializing.

Government numbers are published so that we are brainwashed into believing that things are great! Over the years, they’ve taken important components out of the Consumer Price Index and neglected to talk about the devaluing dollar being a greater tax than the income tax.

Compared to a 1965 dollar, today’s dollar is worth pennies. This is why both adults of a household (and some of the children) must work. And we are still drowning in debt. Unfortunately, this is all part of the grand plan. I call it the Reverse Robin Hood – steal from the poor to make the rich richer. Oil well, as they say in Texas.

Congratulations on your massive remodel in Ireland. Sounds exciting. I’m sure it will be beautiful. By the way, we are waiting to receive our first gift bottle of Tacana Malbec. When will that be coming?

Editor’s Note: Bill’s vineyard is in Gualfin, Argentina. His Tacana Malbec is bottled there, then shipped to the United States. Delivery to the East Coast typically takes two to three days. West Coast deliveries take around five days. You can order your own case of Tacana Malbec right here.

Living in Atlanta, our bolthole is in Highlands, North Carolina, where summers are cool at 4,000 feet elevation. Nearby, Cashiers, North Carolina is our sister town. Both host sophisticated and wealthy second homeowners, along with a growing population of former second homeowners – now permanent residents. The vibe is low-key with very few external signs of wealth other than expensive homes that are mostly hidden from view by rhododendron thickets.

You won’t see many Bentleys, as it would be considered in poor taste to drive one. Mercedes, Subarus, and Range Rovers rule. The point is that one could drive through town and never be clued in to the amount of wealth concentrated here. Most come due to a love of nature and the beauty of the area. It is one of the most special places in the southeast. I am sure you can already guess that there is almost no crime. And when there is, every incident appears in the newspaper. Housing costs are reasonable. Okay homes start at $400,000. The average second home price is probably $800,000. There are many other similar towns in the North Carolina mountains, such as Hendersonville and Waynesville.

Editor’s Note: A bolthole is typically a second home or a small piece of property situated in a safe, pleasant town. It’s a place for you to escape to when the next financial crisis hits. Readers of The Bill Bonner Letter can discover how to find their own bolthole in this free report. And if you’re not yet subscribed to The Bill Bonner Letter, consider joining Bill by going right here.

But while everybody else was losing their shirts, master trader Jeff Clark was raking in money. He didn’t short the housing market like they did in the movies.

To learn how he did it, and how you can do the same thing this year, go right here. 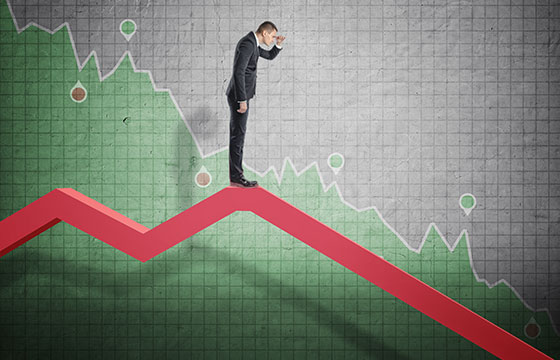