U.S. government debt is on track this year to rise at the fastest pace since 2012, as a stronger economy fails to keep pace with the wave of red ink that’s rising under the Trump administration.

Total public debt outstanding has jumped by $1.36 trillion, or 6.6 percent, since the start of 2018, and by $1.9 trillion since President Donald Trump took office, according to the latest Treasury Department figures. The latter figure is roughly the size of Brazil’s gross domestic product.

Still, the Dow rose yesterday, as the papers reported “hints of progress” in the China/U.S. trade war.

But wars are easier to start than to stop. Stuff happens that neither party anticipated… which leads to other stuff… which, typically, leads to regrettable conclusions.

In the present case, we expect the Trump team is looking for a way to quietly drop the war and turn to other headline-making spats.

But now, with a high-level Chinese technology executive behind bars, China’s hackles are up… and it is likely looking for ways to retaliate, while keeping its merchandise flowing to the U.S.

Meanwhile, Republicans are looking for a way to drop the “shutdown” war with the Democrats. They’re afraid a real shutdown would hurt them worse than their adversaries.

But who can back down without looking like a chump? And as we’ve seen over the last few days, nobody wants to look like a chump even if it is the best thing to do; chumps have fewer mating opportunities.

We were describing this grim future to a group in Washington on Monday night. “Tax cuts can give you a short-term boost,” we explained. “But the deficits are almost permanent. And they get worse as more people retire… and the wars continue. And now, mathematically and politically, there is no way to turn around. The election of Donald J. Trump was probably the nation’s last chance to avoid disaster.”

“Well then… how will this all end up?” came the softball question.

It was a meeting with a group of insiders… the D.C. elite… only two blocks from the White House.

We had given them our view – without much time to explain it in detail – that the money was fake,the interest rates were fake, the news was fake, the statistics were fake… and the boom, too, was largely fake.

We have a bubble economy, not an economy on a solid footing of rising wages, productivity, sales, and profits.

“Government built the interstate highway system,” they said, holding out Eisenhower’s program from 50 years ago – perhaps the last successful U.S. infrastructure program – as proof that the feds know what they are doing.

They proposed another big infrastructure “investment” to get the economy back on track, in case of another crisis.

We ignored their protests.

Instead, we answered their question.

How It Will End

“I’ll tell you how it will end,” we began. “The last crisis never corrected the mistakes of the previous boom; it wasn’t allowed to. Instead, the feds cut it off with their TARP program and ZIRP (zero interest rate policy).

“They poured about $5 trillion – fiscal and monetary stimulus – into the economy. Of course, they didn’t have $5 trillion, so they had to borrow the money. Or invent it out of thin air.

“The super-low interest rates they pushed onto the economy encouraged everyone to borrow rather than save. And so now, the debt problem is worse than ever.

“So the end will begin with another debt crisis. Most likely, businesses won’t be able to refinance their loans. The stock market will fall about 50% or more.

“Bonds will go up… in the short run… as investors try to save themselves from stocks. Real estate and other assets will fall.

“We know what will happen next. Donald Trump and the Fed will panic. Both will react to a downturn by trying to restore the bubble economy.

“The Fed will cut rates. But it only has 225 basis points worth of rates to cut. So, in order to make a cut equal to the last one it made in 2008-2009, it will have to go about 2.5% into negative territory. And it will buy stocks as well as bonds – just like the Japanese have done.

“And the Trump team won’t sit idly by, either. That’s when you’ll get your big infrastructure program. We’ll see a trillion-dollar boondoggle. And then the deficits will really explode.”

“And then what?” asked one of the group, skeptically.

“Then, we enter the gates of Hell. Merry Christmas.”

We do not expect to be invited back.

As Bill mentioned above, U.S. government debt is rising at its fastest pace since 2012…

To illustrate this, today’s chart maps the U.S. national debt from 2012 through today… and projects it out five years using data from the U.S. Office of Management and Budget (OMB). 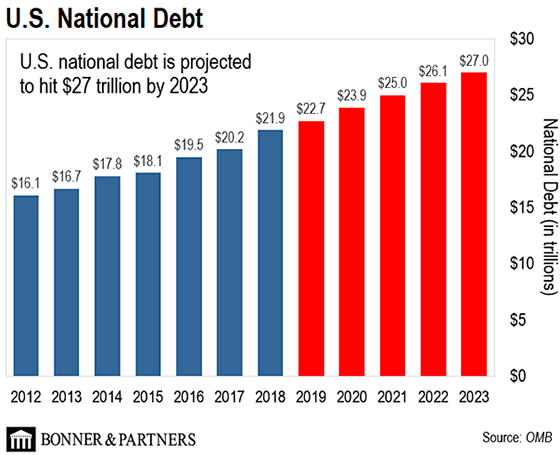 For context, U.S. national debt equaled 99% of U.S. GDP in 2012. In other words, government debt was nearly equal to the monetary value of all goods and services produced within the country that year.

Today, U.S. debt-to-GDP is roughly 111% based on 2018 GDP forecasts… meaning government debt will exceed the value of all goods and services produced in the country this year.

Looking forward, government debt is projected to hit $27 trillion by 2023… a 38% increase since President Trump took office in January 2017.

But these projections assume “business as usual” in Washington. In other words, these estimates presume that the rate of government borrowing remains constant.

But as Bill has said many times, the federal government will not allow the necessary corrections to occur when the next crisis hits. Instead, it will likely respond with a massive spending program… which will send debt soaring past current projections and put America’s financial future in peril…

The Real Impact of the Tax Cuts
As Bill wrote above, President Trump’s tax cuts gave the economy a boost… a short-lived one. With the effects of the tax cuts appearing to dissipate, the long-term impact is taking shape. In short: debt… lots of it.

The Problem With Early Retirement
Early retirement is a goal of many Americans. Kick up your feet and enjoy your freedom for decades. But there are a few roadblocks before you get there…

How the Trade War Kickstarts This Forgotten Industry
The trade war may ultimately be a drag on long-term growth. But in one corner of the market, it’s setting up a rebound for a long-forgotten industry.

In the mailbag, readers discuss how to value stocks…

If you are comparing the historical U.S. GDP to the U.S. stock indexes, where in that does the recent huge globalization effect go? If our multinationals listed in the index are working in the whole world and assembling and selling in the whole world, I do not see how all of this fits into our GDP, a semi-phony government number of USA business activity. Seems this Buffett measure is outdated by world changes.

Right on the beam with this article. Not a pretty picture, but you have spoken the truth… which is out of style since Trump got into the White House. I would like to add my favorite indicator of the true stock market value: the Shiller CAPE P/E ratio, which is now about 30. The historical mean is 16. So you saying that the stock market is 50% overvalued fits right in here. So what do folks do here? BUY GOLD before it is all gone. There is a serious lack of supply, but the sheep do not have a clue.

In response to Dale A., humans contribute only 3% of total CO2, correct? We don’t all agree that CO2 is a problem anyway. How does the CO2 in the atmosphere get down to the tree? The world has been a lot warmer than it is now with hardly any humans. Mt. Pinitubo pumped more greenhouse gases into the atmosphere from one eruption than the human race has in its whole existence. A decent solar flare could raise temperatures by 50 degrees in an instant, and all the money gifted to the UN Climate Change fund wouldn’t help a bit.

The message from Dale A. is a perfect example of someone spouting “facts” without having researched the complete story. Yes, he is right that we have climate history because of data extracted from ice cores. We have 420,000 years of temperature and atmospheric component gas history. And he is right that this data definitely does demonstrate a correlation between temperature and carbon dioxide gas.

The problem is that the core data proves that the relationship is the reverse of what global warming advocates espouse. The ice cores show definitively that temperature leads carbon dioxide build up by many years. In other words, the warming precedes greenhouse gas buildup, not the other way around.

I read, with much amusement, the sermon from Dale A. in Tuesday’s letters, in which he chastised Bill and a bunch of those who subscribe to Bill’s daily missive. He pretends that the conclusions with which he agrees are absolute and beyond debate, while telling those who don’t agree that they are simply too stupid to understand.

Anyone with a passing knowledge of science knows that this climate stuff, like many scientific ideas, has never been absolutely proven one way or the other. At the end of the day, this was nothing more than another arrogant letter from another Al Gore acolyte using the time-worn strategy that yelling at everyone while using some titles and scientific terms somehow lends more credence to his blather. As always, thanks for letting these goofs air their grievances – watching them never gets old.

Did you miss last night’s event?

Last night, thousands of readers tuned in to listen to cryptocurrency expert Teeka Tiwari. Teeka made a big announcement for crypto in 2019, and told readers why he’s still bullish on the industry. If you missed it, be sure you catch up here. 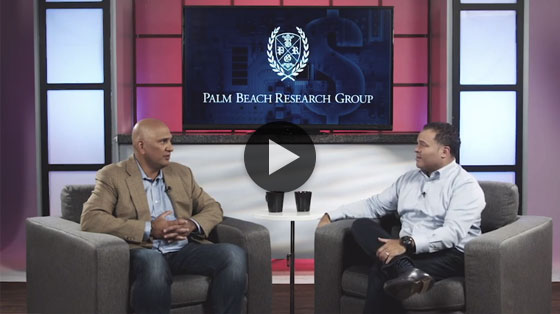