BALTIMORE, MARYLAND – Yesterday, we awoke to the sound of sirens.

After a week at the family farm, we had come back to the city for New Year’s Eve. But hardly had the new year begun when the echoes of the old year filled the streets and alleyways.

Over the holidays, a mental defective had firebombed nine cars near our house in Baltimore. And this morning, the bums are still sleeping at the church entrance next door. One of them has turned the whole area into a dump, with trash and rags strewn all over the steps.

Where We Come From

But before we get to where we are going, let us back up to look at where we come from.

What happened in 2018? We went around the table on New Year’s Eve and asked what everyone had achieved in the 12 months just passed.

“We put a roof on one barn and a foundation under another,” we volunteered. We had just spent the holidays working on the family farm, shoring up an old barn with concrete and cinder blocks; the dirt was still under our fingernails and the work still fresh in our mind.

It was little to show for a whole year, but at least it was something real and durable.

But what about the wider world? Are our foundations more solid? What did we learn?

The headline events are easy to recall. “It if bleeds, it leads,” say the old newspaper editors.

But for all the sound and fury, what did it accomplish? Where did it take us? Are we better off?

Our beat here at the Diary is money. So we will skip the culture wars, nominee confirmations, and foreign policy initiatives. Let’s just follow the money.

And what we notice immediately is that the last decade (save the final three months) was a great time to be rich. The Fed pumped up your stocks, bonds, real estate, and collectibles… And then, Donald J. Trump added a tax cut.

Even after the selloff at the end of the year, the typical stock owner was still two to three times richer than he was in 2009.

But his luck seemed to be running out. By the end of 2018, he was losing money and ended the year down about 6%.

In keeping with the loony zeitgeist of the year, the stock of WWE (pro wraslin’) tripled during the first nine months of 2018. But the typical fan didn’t own the stock; he didn’t have a stock portfolio.

He had only his time to sell – by the hour, the day, the week, or the month.

And his time became less valuable. In March 2009, he could have worked for 40 hours and used the money to buy the entire S&P 500. Now, he’ll have to work three times as long – 127 hours – to buy the same collection of stocks.

But the inflation rate for 2018 was about 2.5%. That means he actually lost 2 cents per hour during the last 12 months.

That would account for a savings rate that has dropped to the lowest level in 12 years – 2.4%. A lower savings rate, of course, means that people have less to save… or are drawing down previous savings.

Either way, it is what people do when they are losing ground.

Overall, real wealth (very roughly measured by GDP) grew at about 3% in the U.S. last year – totaling some $600 billion worth of additional output.

But at the same time, debt grew faster. The federal deficit alone was $833 billion (and is already programmed to go to $1 trillion this year). Altogether, corporate, government, and household debt grew by $1.9 trillion – or more than three times as much as the output that must support it.

The 2018 economy was heralded, nevertheless… by the press, Wall Street, and the president… as a great achievement.

Unemployment went down to levels not seen since the 1950s. GDP growth even pushed up into the 3-4% range for a couple of quarters – just as it had under Barack Obama.

Trouble was, it was still a big, fat, ugly bubble… and Mr. Trump made it even bigger, even fatter, and even uglier by adding more lard.

The idea was that cutting taxes for the rich would cause the economy to grow faster and wealthier.

And it would have worked if the feds had cut spending too.

This would have released real resources that the feds were wasting on assorted boondoggles to be put to work shoring up businesses and improving output.

Alas, that part of the message wouldn’t fit into the tweet. Instead, the feds increased spending and increased the debt.

And, as we’ve mentioned before, if you could get rich by borrowing and spending – or by simply “printing” money – there would be a lot more rich people on God’s green ball.

And so it came to pass that in 2018, the Fed continued to lend money at below the rate of consumer price inflation (effectively giving it away)… and Washington continued to spend money it didn’t have on things it didn’t need.

The rich lost money on Wall Street. The poor lost money as the Main Street economy stumbled. The year came to a close, and we were all, collectively, older and poorer. But no wiser.

That’s the story of today’s chart, which compares gold’s daily trading volume last year to the S&P 500 and other top asset classes. 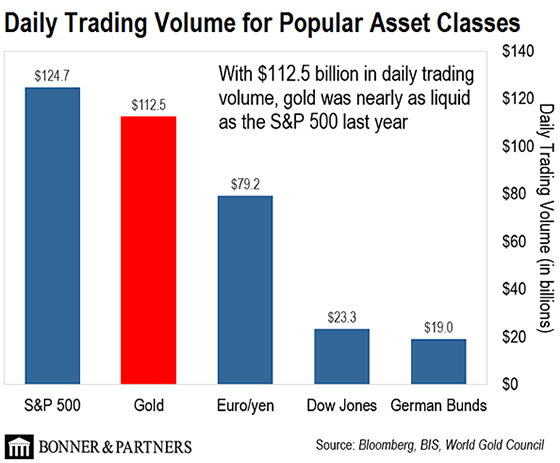 Though gold is often ignored by the financial media as a major asset class, this chart shows that it is a deeply liquid global market that is nearly as popular with investors and traders as the S&P 500.

And with the S&P 500 now moving into bear market territory, the gold trade is likely to be even more popular in 2019…

As Bill advised just before the close of the year, now is a good time to start moving from stocks to gold.

Rough Start…
After a brutal 2018, global stocks got off to a rocky start in 2019. All major U.S. indices began the year down. And it’s not looking much better overseas. Happy New Year…

Big Tech’s Very Bad Year
In November 2017, Dan Denning, Bill’s coauthor on The Bill Bonner Letter, made a prediction for 2018: A “techlash” is coming. Users and investors, Dan warned, would turn on Big Tech companies like Facebook. And he was right. Here’s a look back at Big Tech’s rough 2018…

How to Make the Most of 2019
What will you do this new year? As Bill reminds us, we may have less time than we thought. Do you want to spend more time with your grandkids, learn a new language, or write that book? Tick… tick… tick…

As we kick off the new year, warm holiday wishes from dear readers…

Very good! Thank you for sharing. Merry Christmas to you and yours!

As I mentioned before, Bill Bonner is most remarkable with his profound verbal pellets of wisdom. Hand me the tissues.

Happy New Year 2019, Bill. Thank you for your reflections on the poor baby boomers in your recent mail. Hope for the poor…

Do you read Simon Black’s Sovereign Man? No more money for social pension from 2035 in USA! Pretty close! So happy to be a Dane in Denmark! My point is: Please give people hope. Suggest planting an apple tree – abundant with food every summer, non-GMO, non-Beyer/Monsanto-toxic. Plant an urban garden on every vacant spot. Sing and dance in the streets… Lots of prosperity outside the financial sector.

Nobody knows what 2019 will hold. But if you’re like most investors, you’ll want to start thinking defensively. Dan Denning, Bill’s coauthor on The Bill Bonner Letter, recently released a new report: America’s No.1 Portfolio Protection Plan. Get it for yourself right here. 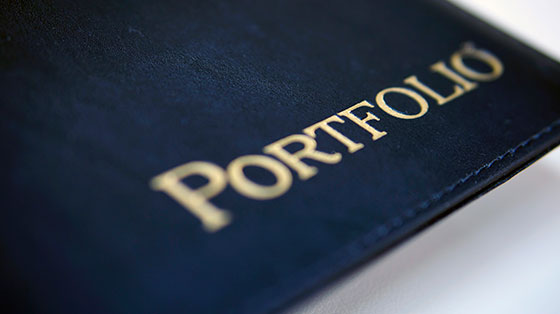