Yesterday, we promised not to mention trade again. But we had our fingers crossed!

Besides, through no fault of our own, it popped back into the headlines.

The Dow dropped more than 400 points yesterday… but then recovered some of the loss. It ended down only 328 points.

Investors seemed to realize that even fake fears of trade wars… Chinese perfidy… or dangerous immigrants can blow up into real calamities.

But if they had a better sense of what was really headed their way, we suspect the Dow would have gone down a lot more.

Instinctively, people know things are going to Hell in a handbasket. But they don’t know what is wrong. So they entertain hallucinations from both sides of the spectrum…

On the one side, they’re the brass of God’s chosen people… who can do no wrong… and who, thanks to their hard work, their sagacity, and the genius of their new president… have the most competitive economy ever known to man…

And on the other, they are the most timorous, faint-hearted people God ever created. They see rapists under every bed… terrorists in every pair of sandals… and economic doom in every statistic.

Today, no matter what direction they look in, they see danger.

On the other side of the Pacific, the inscrutable Chinese are stealing their intellectual property while using cheap labor and government subsidies to underprice their consumer exports.

South of the Rio Grande is teeming with millions of rapists, thieves, and murderers – all of them trying to sneak across the border. With no skills and a lazy “mañana” attitude – they don’t even speak English! – the Mexicans are stealing their jobs.

Here’s POTUS himself, speaking for the American people: “Give us your tired, your poor, huddled masses,” he says… “and we’ll send ’em right back.”

We cannot allow all of these people to invade our Country… When somebody comes in, we must immediately, with no Judges or Court Cases, bring them back from where they came.

And those wily Canadians, flooding the U.S. market with their pulp products… while buying up precious U.S. shoes and leaving Americans barefoot!

And that’s just the beginning. All over the world, and perhaps out in the galaxy, too, terrorists, insurgents, extremists, and freedom fighters… oops, we mean “separatists”… have it in for Americans.

But our military/industrial/security/crony complex won’t rest until every potential threat has been exterminated.

Meanwhile, the Russians are bound and determined to hit America where it really hurts – in its lovely, finely tuned democracy.

The New York Times reported yesterday that the feds’ new “foreign influence” task force got together the top tech companies to warn that the Russians were getting ready to attack:

Eight of the tech industry’s most influential companies, in anticipation of a repeat of the Russian meddling that occurred during the 2016 presidential campaign, met with United States intelligence officials last month to discuss preparations for this year’s midterm elections.

[…] But the people who attended described a tense atmosphere in which the tech companies repeatedly pressed federal officials for information, only to be told – repeatedly – that no specific intelligence would be shared.

American intelligence officials have offered blunt warnings that Russia and other foreign governments are already meddling in the closely watched midterm election campaign.

This “Russian meddling” story has been explored by a special prosecutor and followed daily by the press. But it is still as much a mystery to us as the virgin birth. We’re as puzzled as the tech execs.

What are the Russians trying to do? Elect the best candidate? Or the worst? Voters can’t decide which is which. How can they?

In the end, Americans can generally be counted on to pick the worst of them. So if the Russians wanted to skew the results, they’d have to get behind the best candidates. What would be wrong with that?

And how would they do it?

The Russian economy is about the size of Canada’s, and less than one tenth that of the U.S. There is no way Russia could afford to pour enough resources into the elections to overpower all the spending (influencing) coming from U.S. sources.

And it is not likely that Russians will be any more talented than their U.S. counterparts at inventing fake news stories that might tilt the balance.

So what gives? What do America’s 17 security agencies know that we don’t?

The spooks wouldn’t say. Nothing. Nada. Nyet. Not how. Not why. Or anything else that might be credible or helpful. Or even remotely reasonable.

Instead, they left the tech executives scratching their heads. “What was that all about?” they wondered.

We’ll return to this subject tomorrow…

We’ll see beyond the fake threat posed by foreigners… to the real one posed by our own, home-grown saboteurs.

That’s the story of today’s chart, which compares the total number of U.S. IPOs last year to their peak in 1996. 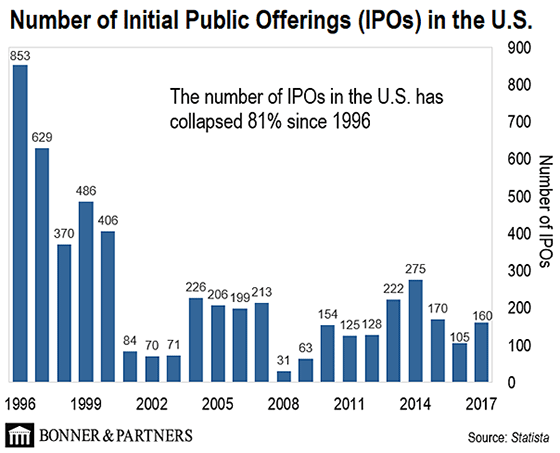 According to the National Bureau of Economic Research, the number of small or regional brokerages that would take a small business public has been shrinking since 1997. They’ve been replaced with larger, older firms that are not incentivized to take small companies public.

Simply put, the U.S. capital markets no longer support small business… which is a problem, because small business is the backbone of the American economy.

More on that tomorrow…

P.S. While IPOs are on the decline in the U.S., the number of ICOs (initial coin offerings) has been skyrocketing. And unlike IPOs, which are often reserved for connected, institutional investors, ICOs are open to the general public.

Bill’s top technology analyst, Jeff Brown, believes this new form of “going public” has the potential to deliver early investors 100 times their money in as little as 18 months. Jeff has all the details in this brief video presentation.

Bitcoin: A Social Movement
The financial world remains fascinated with bitcoin, the world’s first cryptocurrency, even as regulators continue to decide what precisely bitcoin is. Now, a Nobel Prize winner has an answer…

China’s “Nuclear Option”
The Chinese/American trade war is heating up. President Trump recently threatened tariffs on up to $450 billion of Chinese imports. Pushed to the edge, China might retaliate by doing what was previously unthinkable.

The Final Assault in the War on Cash
For years, governments and central banks have been waging a “War on Cash,” a trend of policy decisions to ultimately do away with physical currency. Now, Bill’s coauthor on The Bill Bonner Letter, Dan Denning, believes he’s uncovered what the final assault will be.

In the mailbag, Bill’s Diary, “They Were Ordered to Shoot…” continues to cause readers to reflect…

How can people do the wrong thing? I have been giving this a lot of thought lately. A small manufacturing plant went off the beaten path at my work. A senior manager asked me how the whole site could know it was doing wrong and still do it. My answer was that it is not simple – look at Enron and Wells Fargo (there were no guns in these instances).

I think it takes the right circumstances coupled with the right leader (charismatic) and the right followers that truly follow and do not think – or that think in a mob mentality. Everyone is doing it so it must be okay. It happens in all scales and most cultures – it is a human thing. Leaders must stand up for what is right, not what is popular – they are very different at times.

I am dismayed that you, Bill, have fallen into the trap of a nonsensical comparison between the current law regarding illegal entry into this country and Nazism. So far as I know, none of these children have been shot in the head, burned in ovens, or gassed in fake showers. The parents who bring children along on their law-breaking journey have made a choice, and know – or should know – the potential consequences. Not one child who stays in Mexico has been detained by America.

I just love your take on anything and everything. It makes me think for myself and consider – or sometimes reconsider – what I believe is closest to the truth. I have come to the conclusion, rightly or wrongly, that religion and government exist to control our minds. Before any religious types get up in arms, remember that once upon a time, we were told to believe that the Earth was flat, that the sun revolved around the Earth, and that there was a “box” up in the sky called Heaven, which even had dimensions given for us to “believe.”

Like a government employee with a gun eventually showing up to make sure we obeyed a law, many of those who refused to believe the “religion of the time” were burned at the stake or otherwise put to death. Mr. Sessions is a complete jerk to be compared to the policemen who shot the Jews. I am disappointed there was not more news reporting on his extremely faulty reasoning. Are there no free thinkers left to report the news? Where was the outcry from the religious types on the separation of the children at the border? Oh, there was some all right, about in proportion to the policemen who refused to shoot the Jews. I would ask the rest to chew on that when they next put their Sunday best on and sit in church, and to think about what Jesus would have done.

I am most enamored of your posts when your philosophical side stands forth. I hope you live fully into your hundreds, and I right there with you, learning and loving all the way. By the by, is your nephew French? I can’t even imagine pushing a car (such that it is) uphill/backwards to jump-start it. And to your other Caesar point, it appears there is little written that is not tainted by some foul influence, either analog or digital. Your cyber friend from the beginning and to the end.

If you want to make 100 times your money, don’t bother with stocks…

That’s the message from Jeff Brown, Bill’s top technology expert. Jeff’s uncovered a method that could deliver early investors gains as high as 10,000% without ever buying a single stock. Here’s how. 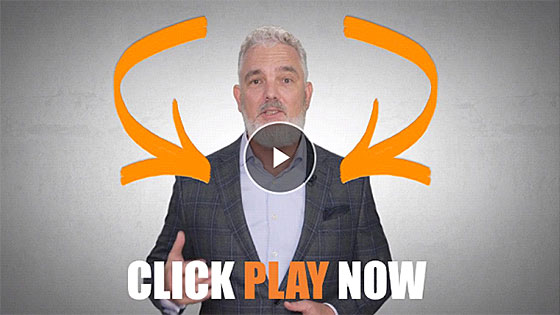