Week 28 of the Quarantine

Usually, we go on horseback, exploring some part of the ranch that we don’t know well yet. Up into the mountains we ride… along the river… searching for an inaccessible mesa… or Indian ruins – there’s a lot to discover.

We remind readers that we’ve been “locked down” here in Northwest Argentina for more than six months. Each time the doors open, new cases of the coronavirus appear and the locals panic.

Now, the lockdown is tighter than ever. For the first time, there are cases here in the Calchaquí Valley… with three in the closest village (about 30 minutes away).

Shops are closed. People must stay in their houses. Come in from another town, and you are locked up for 14 days before being allowed to go to your own home.

So far, the evidence suggests that – other than keeping old people away from the virus – it doesn’t make much difference what you do.

But Argentina has its Faucis, its Redfields, and its Cuomos, too. Its economy is a disaster… its peso is falling hard… and the printing presses are running hot.

[Your] economic viewpoint has taken on a pounding sameness. In essence, we are drowning in debt and there will be no good end. There is no way out. And your endless lectures to readers without control or leverage – we get it, no matter the variations. Mercy.

So, today, we give you a break. We’ll tell you what happened last weekend…

All week, we look forward to Sunday. It’s our day off. The weather is almost always sunny and beautiful. The countryside is spectacular. And there’s always something to see.

This past weekend was no exception. We took a picnic, planning to visit a group of abandoned houses near a dried-up riverbed.

The bottom of the valley is wide, covered with sandy soil, tumbleweeds, and dried-up grass.

But as you go up on either side, you run into more obstacles. Several varieties of cactus, thorny bushes, stunted trees – you wish you had on a pair of chaps to protect your legs.

The higher you go, the more rugged the land becomes. There are “breaks” and impassable rocks… cliffs… and box canyons with no way out.

On our Sunday excursions… as in politics and economics… we often find ourselves trapped… unable to go forward, but difficult to turn around. No matter which way you go, it won’t be very easy.

We were hunting for the casas coloradas, houses that had been built with red clay. They haven’t been lived in for at least 50 years. The roofs have fallen in. But in the dry climate, the walls are still standing.

We had visited them many years ago. So we knew they were up near one of the “breaks,” but we couldn’t remember exactly where.

The only way to find them was to explore… pushing through the rocks and thick, prickly underbrush on cow paths. We followed one of these trails, ducking under low limbs, but coming too close to a cactus and getting stuck, like a pin cushion, with needles.

The path cut through the bottom of a gully and up the other side to a collection of large boulders, with a green tree – a molle – in the middle of them.

The tree tipped us off. It must have water. And if there was water, long ago, there might have been people living nearby.

Sure enough, a few feet from the base of the old tree – many of its limbs lying on the ground or propped up against the rocks – was a small pool of water.

Why there is any water at all is a mystery. It hasn’t rained here for nine months. Still, there are a few little springs that somehow flow all year round.

Around the spring were signs of regular cow visits. The mud was imprinted with hooves… and the water was muddy.

Cattle have their own codes and prejudices. Ours stay down in the valley. When the grass runs out, they expect us to take them down to better pastures, or to give them rolls of hay.

They are “tame”… or at least used to horses and cowboys. If one is especially foul-tempered or aggressive, she is marked for slaughter and soon hung from an algarroba tree near the corral.

This practice gives the cowboys something to eat. And it also provides a moral lesson to the remaining cows: Be nice… or die!

Our cows are all manageable, “commercial,” mixtures of Brahman, Braford, and Angus. But life is too tough here for any of them to survive in their pure state. So they are all mixed with a little of these hardy, local “criole” cattle.

The pure criollos, on the other hand, can be wild and dangerous.

Our cattle look down on the mountain cattle the way New Yorkers look down on country hicks. The criollos are uncouth. Unsophisticated. And unkempt.

We passed one of these animals down in the gully. A “wild” cow… it had a huge head, topped by horns… a small, skinny body, white and black… and a long, shaggy tail. A butcher would hardly know where to start or why to bother; it was all bone and little meat.

Some of these cattle have owners. Some don’t. Many are left alone and may never see a human.

This was one pure criollo. Unsaleable. Almost inedible. There are a lot of them in the hills, so we didn’t pay much attention to it.

Instead, we rode up to the pool and dismounted to prepare for our picnic lunch.

“Yo,” we shouted to Elizabeth, who had been trailing behind. She was still on the other side of the gully. We couldn’t see her through the underbrush.

“The trail is off to your left… Come on over here and we’ll eat lunch,” we yelled back.

We went about our business, tying up our horse, loosening the saddle cinch, and setting out the lunch, until we heard a shriek.

It was Elizabeth’s voice. We turned and immediately saw the problem. The cow we had spotted earlier had its head down and was running right for Elizabeth’s horse.

Elizabeth’s buckskin mare was backing up, trying desperately to turn around. But she was trapped in between trees, rocks, and brush.

Suddenly, she reared up on her hind legs and managed to twist in place so that she was able to make her escape. With Elizabeth still holding on for dear life, the mare bolted up out of the gully.

The cow ran after them for a few seconds, then gave up the chase, a cloud of dust rising up from the ground around her.

And there, she stood her ground, blocking the path, leaving Elizabeth with no way in… and us with no way out.

We were afoot. It made us feel vulnerable. But in this close country, a horse wouldn’t be of much use. There was no room to maneuver.

When we heard Elizabeth yell, we grabbed some rocks and ran towards the cow. But things happened too fast; there was nothing we could do.

But now, there we were… rocks in hand… and the mad cow in the gully below us. We had to get the cow out of the way.

We threw a rock… and missed. Then, like Jim Palmer pitching in the 1966 World Series, we wound up and let fly…

Strike! The stone hit the cow on the rump. It then turned towards us. We looked around for an exit. We were among some big rocks, so we figured we could quickly duck behind one of them.

The cow started coming in our direction, smarting probably more from hurt pride than from the rock we landed.

We loaded up with another couple of rocks. But now, the cow, heading straight for us, gave us less of a target. We fired again. Another miss.

Then, turning to maneuver around a stunted algarroba tree, the beast exposed its flank.

Only about 15 yards away… good range. We let fly again. This would be our final throw, we figured, before we had to run.

But the heavy stone found its mark. The cow, stung hard on the shoulder, hesitated at first… then fled the field of combat, beating an orderly retreat back into the brush.

After waiting an interval to make sure the cow was gone, Elizabeth made her way back down into the gully and across to the watering hole, where we waited.

“I was so afraid…” she declared.

“You had nothing to worry about; I had the situation under control.”

We sat on one of the fallen limbs and ate our lunch. Sausage from our farm… cheese… bread… wine… raisins… and nuts. (The lockdown has cut us off from the city, but we have everything we need here.)

Then, we resumed our explorations, scrambling over the rocks to see what we could see. There were abandoned stone corrals…

And some stone walls, which might have once been a house…

What remains of a house

But there were no casas coloradas anywhere nearby.

So, we mounted up again, and headed to the next “break”… about an hour further away. 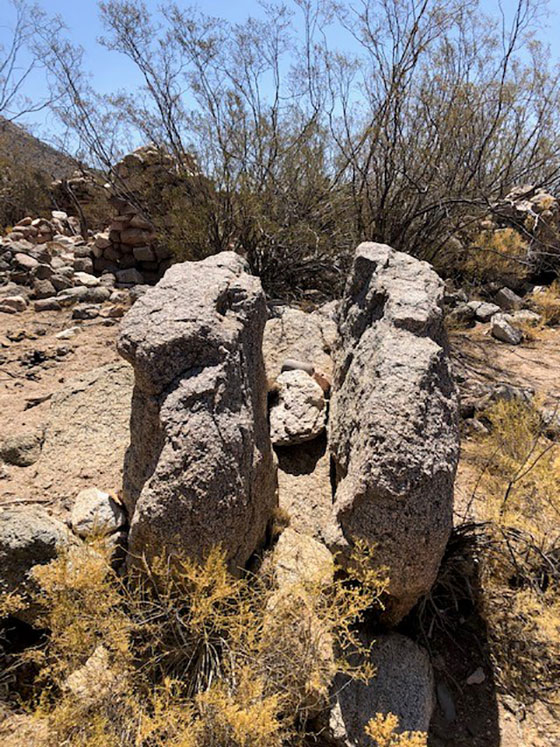 But not what we were looking for.

“Well… We’ll have to try again next weekend,” said Elizabeth, cheerfully forgetting the wild animal that had just tried to kill her.