YOUGHAL, IRELAND – You may be wondering what our discussion last week of “Bad Guy” Theory had to do with our beat… money.

We used the Memorial Day holiday to figure it out. So let us begin by peeking into the future:

Stocks collapse (expected, by us, before the end of the year)…

What makes the next time different is that the feds now have much less room to maneuver.

So when the next crisis comes… the feds will find themselves a day late and a dollar short. It will be too late to hike interest rates; they will want to cut rates, but will have few to cut.

And with an $800 billion deficit already, they will lack the dollars needed to stimulate the economy. Borrowing more money would only drive interest rates higher, stifling a recovery.

With neither monetary nor fiscal stimulus available, what are they to do?

You didn’t ask, but we’ll tell you anyway.

Because the line that leads to the next crisis… then to bankruptcy, hyperdeflation… and hyperinflation… and probably a military coup d’état… runs through “Bad Guy” Theory (BGT), too.

BGT is the Portland cement of the Deep State edifice. It holds the thing together… making sense of a trillion dollars a year spent telling foreigners what to do. No bad guys, no need to spend so much money. At least, that’s the idea.

What really happens is the Empire creates its own bad guys. Currently, more than two dozen countries are on the sanction list.

Some we “sanction” because we don’t like their policies. Some we sanction because they don’t knuckle under and go along with our sanctions on others.

In some, we try to engineer a regime change. In others, we just try to contain the violence, misery, and chaos caused by our previous efforts at regime change. Still others we just push and shove because we can get away with it.

All this costs money. And it is money the feds want, but don’t have. So, they borrow.

That – in addition to supporting zombies and cronies at home – is why we have an $800 billion deficit even without a recession.

Why bother? Should America even be an empire? Do Americans really want it? Are they willing to pay for it?

The questions were never asked. Congress never debated it. And when they are given the opportunity, the voters reject it.

But no president can stand against the Deep State and its empire agenda. There’s too much money and power at stake. Look for yourself.

Where did the money come from?

Oh, Dear Reader, don’t pretend to be so naïve. Northern Virginia has just one industry – military/ defense contracting… and just one customer – the Deep State Empire.

This brings us to another topic we discussed recently: the power of scale.

Scale changes everything. A nuclear bomb is not just a big firecracker. Dying is not like going to sleep for a long time.

And empires are not just big countries. They have different agendas. Different finances. And different “deciders.”

In a small town or even a small country, democracy can work tolerably well.

People know what’s going on. They know where their money is spent. They can have sensible ideas and opinions about what to do.

But not one voter in 1,000 knew that U.S. troops were active in Niger when news broke that U.S. soldiers had been killed there in October 2017 (Congress didn’t know, either).

Almost no one even knew where Niger was, what language they speak there, or what gods they worship.

And who has any idea whether a billion-dollar weapons system or computer spying software needs to be upgraded? What citizen can figure out when Obamacare will go broke?

Today, when a sparrow falls from a tree anywhere in the world, there’s a good chance that the Pentagon or the CIA pushed it.

“We had to neutralize the threat,” the military spokesman will claim. “Our credibility was at stake,” the pols will add. “The damned bird was a terrorist,” the spooks will allege.

The voters have no way of knowing. They trust their generals and their experts. They give the wheel to the insiders and sit in the back seat.

And who can count the cost? When the Fed can create money at will… and lend it out at less than the inflation rate… who can imagine that they are headed for a brick wall?

As always… more to come…

For today’s insight, we step away from the markets and share something a bit different: America’s unwieldy health care costs.

That’s the story of today’s chart, which tracks the top five countries by annual health care spending per household. 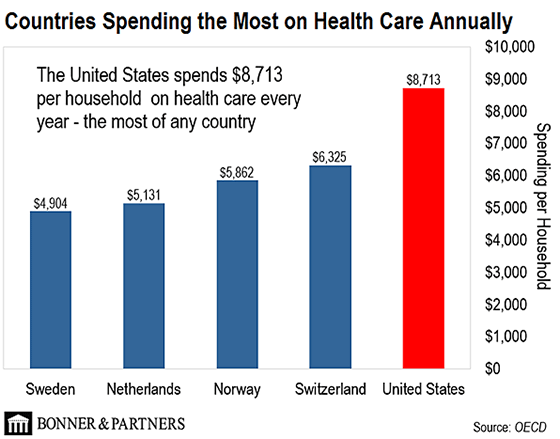 As you can see, the U.S. spends $8,713 per household on health care – more than any other country.

By leading the world in health care spending, you would expect the United States to also be the healthiest country… but that’s not the case.

Life expectancy in the United States is around 79 years… which, unlike the other four countries listed in the chart, places the U.S. outside of the top 30 highest national life expectancies.

A Rockstar Fund Is Leaking Money
Mutual fund giant Fidelity Investments has an enviable track record. It has outperformed 97% of its competitors for the last 10 years. So why, then, are investors jumping ship?

Why Italy’s Troubles Could Soon Become the World’s
Italy is in trouble. The country’s bonds collapsed to new lows over concerns that Italy may leave the EU and abandon the euro. But this crisis won’t stay contained in the Mediterranean. Here’s how it could spread…

Forget Stocks and Bonds
Commodities will be the biggest investing story of the next two years. That’s the message from Casey Research’s globetrotting geologist, David Forest. He believes one commodity in particular is primed for explosive gains.

Today, the mailbag is still dominated by talk of “Bad Guy” Theory…

Well said. Glad this information can see the light of day in this country. Thank you!

Excellent article. Whatever you wrote is the truth. If anyone said you are wrong, it is because of two reasons: either they are misinformed or they are driven by emotion. Some people may not be happy with your article; at the same time, they don’t want somebody to invest their money with ignorance and emotion.

The problem with Bill’s critique of Israel and the U.S. is that he doesn’t compare their actions to any standard other than perfection. If he wants to talk about empire good guys and bad guys, then he should discuss the subject with all empires like the Roman Empire, the British Empire, etc., and then opine on the ones that were malevolent versus benevolent, or, at least, less bad.

I think the U.S., with all its faults, is less bad than the others. Empire, by its nature of capture, kill, and control people, is evil. If the Israelis did not defend their border with force, they all would be killed. So if Bill wants to criticize the shootings at the border, please tell the whole story of what is going on, not just the part where people are shot.

In criticizing your readers who suggested another interpretation of what is going on in Gaza, you argue that people cannot know what happened, or why it happened, from thousands of miles away, and then you reiterate your one-sided condemnation of Israel. But doesn’t this logic apply equally to you? You’re in no better a position to comment on what’s going on there than anyone else, especially if you pick and choose your news sources to support your biases.

If someone was hurling flaming vessels of gasoline at you and/or yours, I would support your right to shoot them out of your act of defense. Who wouldn’t?

Your article is exactly how we should look at the news. More often than not, there are two sides to each story. Thank you.

Everyone is a “Bad Guy” in the eyes of someone – think of Jesus as an example. The real question you have to ask is, “When do I shoot?” For instance: A truckload of large, young men pulls up outside your house in daylight. Do you shoot? What about in the middle of the night? Do you shoot now? They start to get out, carrying hammers and axes. Do you shoot now?

They walk up to your doors and windows. Do you shoot now? They start breaking your windows and break down your door. Do you shoot now? (This is the point where Israel was – and the people also had explosives and other weapons.) So now, they have broken into your home and are killing your family. Gee, I bet you are wishing you had started shooting.

Thank you for this. It’s a wake-up call for all those who believe you are born “anything” – good, bad, etc. – other than what you choose to be on any given day.

Bravo for your recent Diary. Thank you for deciding to send this. I hope this message finds its way to you. Anyone with half a brain can see that purporting the idea of one being good versus another being evil is what creates so-called evil. The judgment of someone or something as good or evil is what causes people to commit atrocities to others, be it people or animals, to other beings, or to our planet, because they deem others as being less than worthy or unworthy. Bravo for your response. Please feel free to use my response.

My late husband would have agreed with you. He was a highly decorated fighter pilot in the Second World War, a war that most thought had clear “good” and “bad” guys. Although he had every medal but the Congressional Medal of Honor, he once told me that the only thing that made him a hero was the fact that he was on the winning side. Had we lost, he would have been considered, at best, a failure, and at worst, a war criminal. I know he would have agreed with your sentiments.

By the way, when we married, he was 25 years older than I was, which explains why I am still around to quote him. Keep on writing. The fact that your essays are both thoughtful and thought-provoking makes them all the more important in this age of… – I really don’t have a name for it.

Wow, Señor, you have kicked a hornet’s nest. Booooyahhh! As a man who despises injustice, who hates a bully, and who loathes the abuse of power, I am perplexed about the “outrage” of some of your dear readers. All you pointed out and asked is: Is Israel now so corrupted by power that it is now a part of “the dark side”? The answer is obvious: Of course, it is. It got there by following the lead of its mentor and benefactor – the good ole U.S. of A.!

So where, if anywhere, should you put your money?

David Forest, editor of International Speculator, says that the largest gains will be made in commodities – not stocks or bonds – in the years ahead. And one specific commodity could deliver investors life-changing gains. 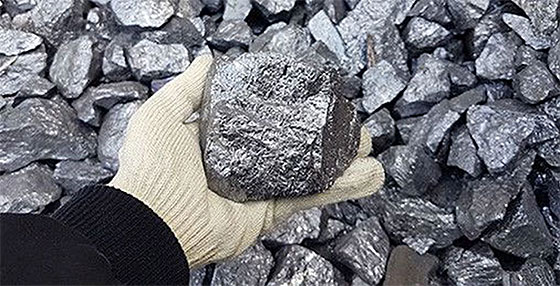