I tried to stand up and fly straight, but it wasn’t easy with that sumbitch Reagan in the White House. I dunno. They say he’s a decent man, so maybe his advisors are confused.

– Quote from a loser in Raising Arizona

In the last 90 days, we’ve seen that the top 10% of Americans – who own nearly 90% of all stocks – have gained about $8 trillion in stock market wealth. (Yesterday, we used the figure $21 trillion… but that was a worldwide figure, not just for the U.S.)

A little simple math. Ten percent of the American population is about 33 million people. That’s about a quarter of a million dollars each.

The government’s Coronavirus Aid, Relief, and Economic Security Act (CARES) package, meanwhile, handed out some $2.2 trillion. Much of this money, too, was earmarked for the top 10% – in business loans that need not be repaid.

But just to keep the math easy, let’s assume it all went to the 90% of the population who are not wealthy.

As we’ve seen, the “two-system” system ruins the economy, undermines social stability, and corrupts the government. It is unfair and unproductive. And even if the masses never figure out exactly how they are getting ripped off, they are still likely to nurture some hard feelings. Or worse.

But dear readers have raised an important objection. They say that what people in America get is not a result of public policy… it’s what they deserve.

Maybe the Federal Reserve is juicing up the stock market… but if people are poor, it’s their own fault.

One dear reader, Joe E., led off the discussion with this comment:

There is no excuse in America to be uneducated or poor…

Others joined in, the gist of their remarks being that hard work, grit, and clean living can still lift people out of poverty… and that most of the poor are poor because of their own bad choices, not because of federal policy.

Another reader, HO N., joins in the discussion:

Totally agree with Joe E. My parents survived the bombs during World War II. After the Soviet Communists took over their country, they came to the U.S. Their families had lost everything. My dad’s parents disappeared during the war, never to be found. Everything my parents had was in a small suitcase. A few dollars in their pockets and the clothes on their backs. Though they were fluent in a couple of European languages, they had to learn English. By golly, they did.

My dad was an industrious, ambitious person, and within five years after arriving here, he started his own business. There was no welfare back then. They wouldn’t have considered it, even if it had existed.

Joe is right! The system probably is corrupt. But it could be overcome, as Joe so clearly stated.

We completely agree. An individual – with luck, brains, and determination – can beat the system.

And even if it is not true, he should still believe it. He is the only one who can really improve his life. And if he ever loses faith, he’s finished.

He can march in all the demonstrations he wants. He can vote and write letters to the editor… and ask his congressman to take the knee. But he, and only he, is likely to genuinely improve the circumstances of his life.

No one will polish his shoes for him. No one will get to work early and pretend to be him… or prove to his boss that he should be given a raise. No one will save money for him… learn new skills for him… or brush his teeth or comb his hair.

And if he’s counting on the feds to make his life better, well… good luck to him.

But if the common man ever starts to believe that the elite has betrayed him… has used him as canon fodder in a pointless war… or stolen from him in a scammy financial system… there’s going to be trouble.

Here at the Diary, we only try to understand what is going on.

And what we see is that the elite have ceased being useful stewards of the nation’s institutions. Now, they have become predatory… exploiting the “two-system” system and hogging wealth for themselves…

The average working stiff, laboring in the vineyard of the Main Street system, has not had a real raise in four and a half decades – even in the midst of the biggest rush of technological and scientific progress in history.

And now, saddled with student debt, personal debt, car loan debt, housing debt, and the biggest pile of government debt in history… gagged by face masks… and idled by house arrest… young people are set to do even worse.

Will the masses ever figure out what is going on? Probably not.

Instead, they will howl about “greed” or “racism”… They will rant against “capitalism” and Wall Street… and vote for a scalawag who promises a Universal Basic Income, more stimulus, and more money-printing.

And they’ll get what they ask for…

P.S. What week is this? Here at the ranch, we measure out our lives in empty wine bottles… 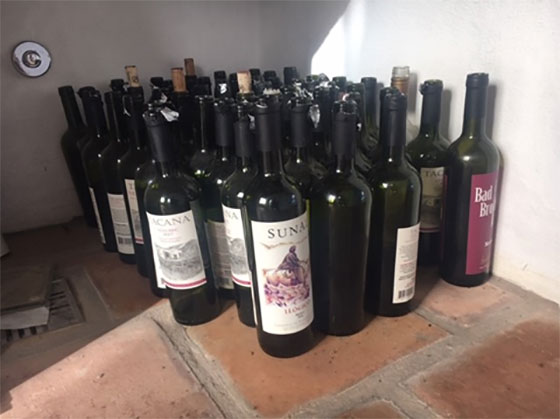