The proximate cause was a tweet by President T., who threatened to remove federal subsidies to GM’s electric cars. This from Bloomberg:

GM fell as much as 3.8 percent as of 3:30 p.m. Tuesday in New York, wiping out much of its gain a day ago. The earlier rally was linked to Chief Executive Officer Mary Barra’s plan to boost cash flow by shutting plants in the U.S. and Canada and jettison struggling sedans from the company’s lineup.

Trump wasn’t specific about the subsidies he was referring to, but consumers are eligible for a $7,500 federal tax credit toward the purchase of electric vehicles like the Chevrolet Volt.

As long-time Diary sufferers know, there are only two ways to get ahead in this world – honestly… and dishonestly. You either provide a service and satisfy a customer (or employer), or you lie, cheat, and steal.

Either way will work on an individual basis. But collectively and historically, they have very different consequences. One leads to economic growth and a fair distribution of rewards. The other leads to poverty and corruption.

The trouble is, in today’s fake news, jackass-riddled world, it’s hard to know which is which.

Herewith, for entertainment purposes only, we attempt to sort them out.

The trouble with lying, cheating, and stealing is that it doesn’t add wealth. It just moves it around.

Peter is robbed to pay Paul. Paul is happy with the deal. He wins. Peter loses. But ultimately, everyone is worse off. To paraphrase ex-British prime minister Maggie Thatcher’s famous comment on socialism, eventually Peter runs out of money to steal.

Honest work, on the other hand, makes almost everyone better off. If Paul wants something, he’s got to get off his duff and produce something.

You end up with a society of earnest strivers… with millions of Peters and Pauls, all trying to produce more and better products and services – for each other.

That is the gist of Adam Smith’s theory in The Wealth of Nations. It is also the source of Jean-Baptiste Say’s key insight that “products are purchased with products,” not with money alone.

Governments, to the extent that they encourage honest work, trade, savings, and investment can help make people better off.

In their early days, the Roman Empire and the American Republic provided the basics – security, a reliable currency, a court system, and a large, more-or-less-free trade zone – and otherwise left people alone.

But government is power… and power always leads to corruption. Insiders and cronies (aka the Swamp) get control of the government and use it for their own ends, turning the win-win deals of a free economy into the win-lose deals of a politicized economy.

Turning to General Motors (GM)… The company makes cars. It sells them to willing buyers. In an ideal world, its profits reflect the number of sales it makes and the difference between the cost of the resources that went into them and the price of the finished cars on the open market. GM’s share price, therefore, is a kind of outward sign of inward grace.

Not all of GM’s cars are great successes, however. And producing cars is a very competitive business. So it is not surprising that auto companies sometimes need to cut back… or even go out of business completely, releasing raw materials and labor to some other, more rewarding venture.

Then, along cometh President T. with a hammer in his hand. President Trump hit the nail squarely on the head by proposing to eliminate the subsidies to GM’s electric car. That would force the car to succeed or fail on its own merits, honestly.

Then, the president swung the hammer again… so recklessly that he practically knocked himself out:

They better get back [to Ohio] and soon… They better damn well open a new plant there very quickly.

The Donald seems to think that he – not shareholders, management, or customers – should tell the company how to run its business.

But politics is always basically a dishonest business… a win-lose, smash-and-grab enterprise.

The voters have no way of understanding what is really going on. All they can do is pull the lever for whomever comes up with the gaudiest promise.

It shouldn’t be a surprise that he is now telling GM how many people to employ, where… and how.

Trade is fundamentally a win-win transaction. People don’t trade with each other unless they think they’ll both come out ahead. Trade is at the heart of the aforementioned Wealth of Nations… and it’s the real source of prosperity.

But President T and the feds are now targeting not only specific industries, but specific companies for subsidies… or penalties, depending on their lobbyists, campaign contributions, and insider connections. They want to determine who wins and who loses.

By our measure, the Swamp just got deeper. And the reckoning just got closer.

P.S. Before you go, we’d like to remind you about an event tonight. At 8 p.m. ET, we’ll be appearing on a free webinar along with Casey Research founder Doug Casey and Palm Beach Research Group co-founder Mark Ford.

You see, we’ve been working on a project with Doug and Mark for some time. And we’re finally ready to reveal it to dear readers. We can’t give away too much right now, but you can hear everything for yourself by saving a spot right here. We’ll speak with you later.

MARKET INSIGHT: WHY THAT NEW CAR IS GETTING MORE EXPENSIVE

As Bill wrote above, GM’s stock took a hit yesterday after President Trump’s tweet. But the prospect of losing subsidies is not the only headwind GM is facing right now…

The financing rate on new autos has spiked over the past two years as interest rates have risen.

Today’s chart tracks the average finance rate on 60-month loans for new autos from the start of 2009 through today.

But financing rates have spiked since then.

The average 60-month finance rate has jumped up to 5%. That equates to a 22% increase in the cost of financing over the life of the loan.

This drives monthly payments higher – making it less affordable for buyers to purchase new cars. And as Bill has reported in the past, rates are likely to rise for the foreseeable future, meaning the cost of buying that new car is only going to go higher from here.

Domestic auto sales have already fallen 28% since hitting their post-2008 high in June 2014. We can expect that trend to continue as finance rates rise… which will likely put more pressure on the stock prices of GM and other automakers.

Bitcoin’s Existential Crisis
Here’s a surprising fact: 0.5% of the world’s electricity consumed this year has gone directly to “mining” bitcoin. Every month, these miners consume enough power to light a small country. This begs the question: What happens to bitcoin’s power usage if the crypto reaches mass adoption?

The Assassination of Bitcoin
Last week, Bill speculated that central banks could be gearing up to issue their own crypto-coin. Dan Denning, Bill’s right-hand man on The Bill Bonner Letter, thinks it’s all but assured. Only one thing stands in the way of the central banks: bitcoin.

Revisit the Nifty Fifty
Recently, Bill regaled readers with a tale of the Nifty Fifty, a collection of so-called “buy once and forget” stocks. The Nifty Fifty were supposed to be investors’ saviors from market crashes and volatility. But that’s not what happened…

In the mailbag, a variety of topics: Plymouth Colony pilgrims… the “King of Chapter 11”… and who actually is a Yankee?

Your letter on Thanksgiving was most interesting. However, you made a common, but major, mistake. Thanksgiving did not emanate from the Puritans. The group that landed at Plymouth and established Plymouth Colony in what later became Massachusetts was the Pilgrims. They were not religious zealots. They were the beginnings of the Congregational Church. In fact, the Congregationalists were persecuted in England because they were not part of the Church of England, and fled to Holland, where they could worship in peace. They set sail for America from Holland, hoping for a better life with continued religious freedom.

Great recap of rising interest rates and the mounting debt problem. I’m sure the president has it all figured out. After all, he’s the King of Chapter 11 and 7 restructuring. The U.S. should just declare insolvency (again… as the Fed did to us in 1935), and much of the debt would be wiped off the books. What’s the problem, you ask?

Well, the Deep State owns and controls the majority of the debt and has no intention of wiping its net worth off the books. In 1935, it had all the State’s governors come to Washington to sign over the assets of the states along with those of their people. Guess they can’t do that again – the Deep State already owns the whole shebang. Back to the drawing board to come up with something revolutionary, ha, ha, ha.

Bill, I am a Canadian, but my dear friend from New England chastised me once when I observed that New Yorkers were Yankees, when indeed they were not Yankees. The term Yankee comes from the original five New England colonies, and New York is not part of the Yankee designation. As I recall, the original five are Maine, Vermont, New Hampshire, Connecticut, and Rhode Island.

Bill, if your long-term thesis is correct, why aren’t you in cash and gold and out of all the markets?

Will you be joining Bill tonight?

Our editor, along with Doug Casey and Mark Ford, is hosting a free webinar tonight at 8 p.m. ET. The three men will reveal the details of a project they’ve been working on in the background for several months. And they need dear readers like you to “partner” with them. Get all the details by going right here. 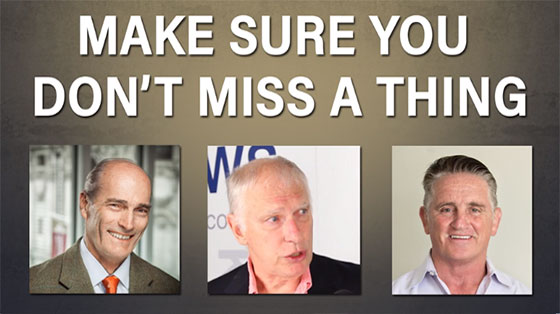