We came over on the ferry from Southern Ireland. It takes longer than flying. But we have our car here, which makes it easier to get around – especially when the trains aren’t running.

“They got their benefits fair and square. They don’t want to give them up.”

A friend was explaining why railway employees were on strike. At issue, apparently, are employment contracts that give SNCF (France’s state-owned railway company) workers some pretty juicy plums:

“A conductor can retire at 52, with full pension… and, of course, their families get to travel on the trains for free. These contracts were negotiated during the heyday of union power in France. Now, they seem a little out-of-date. And more than we can afford.

“Twenty years ago, a strike like this would have shut down the entire country. Now, people are pretty blasé about it. There are usually some trains running, even when it’s a strike day.”

When you go on the website to buy a train ticket, you are told that you “cannot reserve a ticket because of a social movement [a strike].” Then, you are directed to a calendar that tells you which days will be strike days.

Meanwhile, the “war” with the U.S. seems to be heating up.

For a refresher, last week, the president announced trade tariffs on imported aluminum and steel, not just from “enemies” like China, but also from American allies like Canada and Europe.

The New York Times takes a more measured approach to the new war with Europe, focusing instead on how a deeply divided enemy might respond:

“I don’t think [the EU] will be strong enough to rally against this,” said an investment banker. “They are not willing to pay the price.”

Then, the NYT turned to the 49th parallel:

“A slap in the Canadians’ face,” reads a headline. The paper sent a reporter to Hamilton, Ontario, where some 9,000 people work in the steel mills.

“No Canadian wants what Trump is doing,” one of the locals told him. “And if he gets away with this, what else is he going to ask for? He’s like a little bully; that’s all he is.”

“We will not negotiate with a knife to our throat,” added an official.

We’ve already made our sympathies clear: Private citizens shouldn’t have opinions about other people’s trade deals… and neither should the feds.

It’s none of their business. Win-win deals – made freely, without knives to their throats – are the only honest way to get what you want.

Many readers disagree. “But they do it…” is a now-familiar pushback.

The gist of this argument is that if a foreign government stomps on its own citizens’ toes, the U.S. feds should, too.

But, as you’ll remember from last week, we’re trying to understand how the U.S. government functions.

The hypothesis on the table: When the U.S. evolved from a simple, modest Republic into a global Empire, it left behind the system of government designed by the founders and taught in the public schools.

That’s why the president can mess with the entire world economy – on his own say-so.

And it’s why the U.S. is now meddling in as many as 130 different conflicts, including five active wars, with no Congressional declaration.

With so much going on, it is no wonder that the people… and their representatives… have largely lost track. Is “our” trade with Europe “fair”?

Who the hell knows?

The insiders, the technocrats, the cronies, and the campaign contributors have taken over. The Deep State rules.

But what role does Donald J. Trump play in this? Is he a disruptor… an enemy of the Deep State?

Or is he the leader of one of its factions? Or is he just a “useful idiot,” pretending to fight against the Deep State while actually providing cover for it to expand its power?

More on that anon.

Meanwhile, despite the state of war… life in Paris goes on…

Last night, we left the hotel and found thousands of people dressed in white on the esplanade in front of Les Invalides.

It was the “Dîner en Blanc” [dinner in white] – a phenomenon begun 20 years ago. People from all over the world come to Paris and wait for a message that tells them where they will all meet.

Then, when the signal comes… like a flash mob, they pack their picnic baskets, bring candles with folding chairs and tables, and arrive – thousands of them. This year, the press estimated that some 20,000 people participated.

We have often joined a group of friends at a private “Dîner en Blanc.” The idea comes from the tradition of dressing in white on the 15th of August to celebrate the Ascension of the Virgin.

We don’t know the motive for the big bash that happened last night. Maybe it was a farewell to a doomed civilization.

MARKET INSIGHT: THE PRICE OF TARIFFS

As Bill reported, Trump recently announced tariffs on imported steel from the EU and Canada. This, as well as earlier trade tariffs, is having a noticeable impact on the price of steel.

Today’s chart tracks the price of steel, as measured by the NYMEX Midwest Hot-Rolled Coil Steel Futures, from the start of 2017 to today. 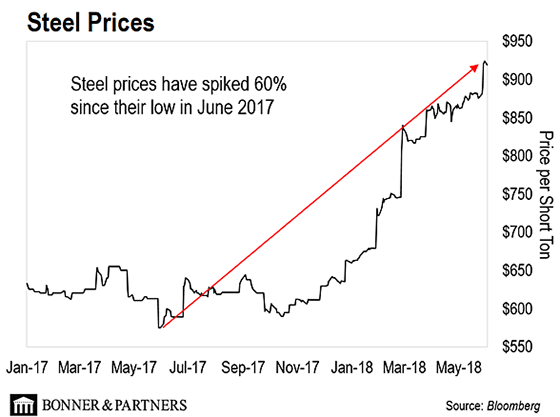 As you can see, the price of steel has risen 60% over the past 12 months – largely because of trade tariffs.

The Italy Effect
As Dan Denning predicted recently, the political turmoil in Italy will likely lead to uncertainty about the future of the EU. And with Italy’s bond yields spiking, trouble is brewing in other economic arenas as well…

Good News for Crude
A new development in the energy market: The “spread” between West Texas Intermediate crude oil (oil refined and used in North America) and Brent crude (the worldwide benchmark) widened to three-year extremes. Here’s what it means for the future of oil prices.

Two Steps to Score a Hundred-Bagger
With the “primary trend” in the overall stock market likely headed lower, finding individual winners is more important than ever. Here, one of Bill’s top analysts, Chris Mayer, shows two steps to follow to return 100-to-1 on individual stocks.

I agree with you about BGT and its role in Deep State actions. I was surprised to learn that there was so much opposition to the A-bombing of Japan, as I was “taught” or indoctrinated to believe that it saved thousands of American lives. Am I cynical, or maybe the Deep State wanted to either show Russia our might to discourage aggression or initiate the arms race in order to capitalize big time?

If an elite has a better education or better experience, then this philosophy of a “noble Deep State” would work. On the other hand, if the leader is egoistic, then this would ruin the nation very quickly – especially if he is playing footsie with our foes and cutting off our allies in Europe, this would also create major problems for the travelers.

I remembered when I was living in Canada, I went to Paris with my wife. At that time, I had a Canadian passport, while my wife was traveling on her American passport. At the airport, the customs officer just looked at my passport cover and opened the gate for me to let me inside, while my wife had to stand for almost an hour in line and then had to fill out some extra forms and answer additional questions before they let her in. Why is this? When I asked the customs officer, his response was that I was from a friendlier country. Does this mean that they do not consider the U.S. as a friendly country?

At that time, the Canadian leader was Trudeau’s father, who knew how to keep up the good relations with our allies in Europe. I do not think we have the same kind of leader now who could stretch his hand for friendship.

Wanted to respond to one of your readers, Richard P. Is this guy missing a chromosome or something? Trump needs a few million dollar kickbacks from the Cohen debacle, or more money from the golf course… That is chump change to these folks.

Like him or not, Trump is doing more than the last three presidents (whether that pans out for the “People,” we shall see). No one was going to reverse the deficit that was beyond repair, which I think you agree with. Always a thought-provoking time reading your take on things and your family stories.

Meanwhile, a fellow “bolthole” owner offers Bill some advice for his ranch…

Good morning, Bill. My name is Mike. I am a 69-year-old, very recently retired farmer from the south coast of western Australia. I’ve been a subscriber to your Diary and Letter for the past year or so, and I learn a lot from them as well as enjoy your candor, along with your sense of humor.

We feel fortunate to have been a short way along the right path regarding the coming disaster, but we are learning a lot more about the right moves in some other areas. We have kept much of our assets in cash, have good real estate without debt, and have a small property which already gives us plenty of fruit, veggies, eggs, and potentially more food if required. We still need to make further changes to feel more relaxed about our situation, but we are heading in the right direction.

When we farmed, we used non-chemical methods (biodynamic), ran cattle, sheep, and chickens for eggs. More importantly, we used holistic management methods, as espoused by Allan Savory. We farmed in a very different type of area and conditions than your ranch. However, these methods are used very successfully in such climates and conditions. My suggestion to you, if it interests you, is to contact the Savory Institute in the U.S. I am sure they will be able to assist you. While you can’t change the climate, you can change the management of your ranch. And based on our own experience, stocking levels, stock conditions, pasture production, soil health, and most importantly, income and profit, all will improve quite dramatically.

Keep up the good work.

Do you see it?

It might not look like much, but Jeff Brown, Bill’s top technology expert, believes that the image below has a clue hidden inside it. It’s a hint at the next big move for e-commerce giant Amazon. And it has huge implications for investors. Details here.