MIAMI – As expected, the stock market seems to be on the mend.

After the scare of two weeks ago, prices are firming.

And the Fed is giving the economy the all-clear. Bloomberg:

The U.S. labor market is near or beyond full employment, while some pockets of finance are showing signs of rising leverage and high valuations, according to a Federal Reserve report.

“Beyond full employment” is a phrase that needs explanation. We take it to mean the Fed has gone bonkers. But we’ll elaborate on that another day.

The U.S. labor market is near or beyond full employment, while some pockets of finance are showing signs of rising leverage and high valuations, according to a Federal Reserve report.

Today, we’re merely trying to get back on schedule after a snafu that left us stuck in Miami International Airport at midnight last night. (As we type, it is about 7 a.m…)

Yes, our travel plans got more than fully messed up. And now, we are way beyond completely ready to move on.

But back to our beat of the markets…

“Buy the dip” has worked for the last 38 years. And now, investors are more than 100% convinced that it will work again.

But they are wrong.

Here’s an extract from a letter to clients of Semper Augustus, an investment group:

Fundamental investors like to pronounce they don’t think about macroeconomics. It’s all about researching companies, they say. We’re with you, brothers and sisters. However, if there was one economic chart to pay attention to, the one presented below of changes in the Fed’s discount rate is it.

Going back to 1950, every U.S. recession (gray shaded area) has been preceded by the Fed hiking interest rates

Every major stock market decline and every recession in the last 100 years was preceded by the Federal Reserve raising short-term interest rates by enough to provide the pin to prick the balloon.

Note the emphasis on every. Yes, there have been periods where the Fed raised rates and a recession didn’t ensue. Everyone knows the famous saying about the stock market having predicted nine of the past five recessions! That may be true, that rising rates don’t necessarily cause a recession. But as an investor, you must be aware that every major stock market decline occurred on the heels of a tightening phase by the Fed. More importantly, there have been no substantive Fed tightening phases that did not end with a stock market decline.

In our last book, Hormegeddon, we described a phenomenon known as the “declining marginal utility of debt.”

A little debt may be a good thing; a lot of it is not. At a certain point, you have more than “too much debt,” and it becomes toxic.

Where exactly in the cycle we are, we don’t know. But our guess is we are already way beyond the place where we are fully indebted.

This is an economy built on debt. The whole capital structure – stocks, bonds, and real estate – now depends on excess debt… and more of it.

In a correction, the only way to stop stock prices from falling and the economy from shrinking is to bring in some more debt. But when you do that a few times, you are soon beyond Peak Debt… which is to say, you’re way over the legal limit.

Debt has been growing three to six times faster than income for more than an entire generation. This makes the old 1.5-to-1 ratio of debt to income seem quaint. It is now 3.5-to-1 nationwide.

Which is why deficits still matter.

Every penny in debt that we add now is a penny that cannot be repaid, not by any plausible combination of economic projections.

Because there is no way to “grow your way out of debt” when your income is falling while your debt is still increasing.

Instead, you have to suffer the indignities of a correction, including a major reset in the stock market.

That’s what happens when stocks that are more than fully priced meet a debt load that is beyond 100% of capacity.

It looks at the year-to-date performance of the “FAANG” stocks – Facebook, Apple, Amazon, Netflix, and Google – versus the S&P 500. 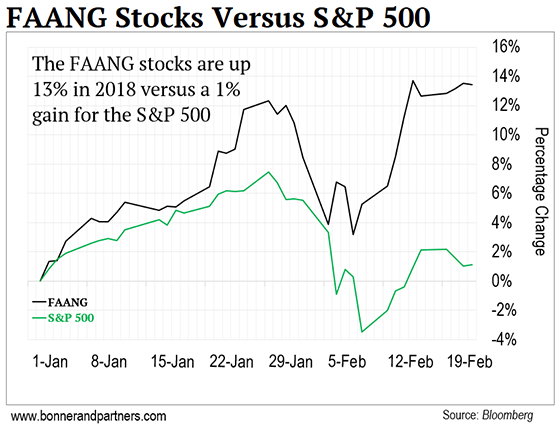 Venezuelan Workers Are Literally Collapsing
Bill reported on Friday that Venezuela is in deep trouble. Now, another sign of just how bad things have gotten: starving employees are too weak to do heavy labor. And that could be catastrophic for the country’s oil business.

A Huge Red Flag From Silicon Valley
As Bill Bonner Letter coauthor Dan Denning reported recently, technology has made our lives easier… but at a price. In the heart of Silicon Valley, some parents are taking an unusual step to limit the impact of big technology on their children.

Don’t Fall for This “Investing Illusion”
In an excerpt from his newest book, Chris Mayer shows why most investors fall for flawed thinking, and what you can do to see the bigger picture.

In the mailbag, the Russia investigation remains a popular subject…

You are full of yourself, which doesn’t seem to be much. Thank God for Mr. Mueller and his efforts. Sadly, it is lost on you and those propping up a despicable man we now have to call president.

Are you afraid Mueller might be coming your way, wondering about your international financial entanglements? Today’s essay served little.

How can you defend this animal as a president? You may make me sorry I have subscribed!!!

I couldn’t disagree with you more on the Mueller work. For one thing, the Russian social media shenanigans were far from tame. Tens of thousands of Americans in Democratic districts were tricked into “voting online” by Facebook posts. Many more turned against Clinton based on horrible lies expertly planted by the offenders. Consider that Trump won by a mere 70,000 votes over four states. While the U.S. surely got a taste of its own medicine, interfering in a nation’s election is serious business.

But this is just the periphery of Mueller’s efforts. Mark my words, the Trump organization will ultimately be exposed to have laundered millions of dollars of Russian mob money into America over the past decade. This is the reason Mueller has subpoenas for German bank records, and why Trump won’t release his tax returns. Trump has escaped bankruptcy three times, once with the help of dirty Russian money. And how many times does a presidential campaign need to meet with Russian officials?

I don’t know if Trump conspired with Russia on the election, but I would bet the farm he has either committed serious fraud or agreed to push Russian foreign policy objectives in exchange for financial considerations, which, in my mind, is treason. This clown is going down.

Just curious, since you are closer to the “action” out there. Do you or anybody know if there is any type of timetable or budget for the great investigator [Mueller]? Or do he and his posse have a blank check with this whole White House investigation? I would be interested in what this little crusade has cost us so far, since he has summoned quite a group to leave no stone, rock, or post unturned.

Loved your article today about his big bust. I am shocked that 13 people could have that much of an influence on our election. What was it he was supposed to investigate again?

Good thing Hillary didn’t rig the Democratic nomination against Bernie. Oh wait, she did, didn’t she? Good thing Donald Trump isn’t a bully, liar, womanizer, etc. Oh wait, he is. Of course, two horse**it candidates didn’t have any effect on the election. Keep up the good work!

Meanwhile, Bill’s hometown of Baltimore is on readers’ minds…

You said: “No commerce or industry, except for the liquor stores and convenience stores run by Koreans. This was a real “sh*thole,” right here in the USA. What kind of society produces such a forlorn, degenerate place?”

I know you’ve been offshore, but you really should keep up with the times. Such talk as “sh*thole” is no longer permitted. The new description is: “A turd world country.”

Last week, I was in downtown Baltimore and had to go west and thought, “I’ll just take Route 40 west out to the beltway at Catonsville.” HORRIBLE. I hadn’t been out that way for 15 to 20 years. It looks the same, only worse than it did after the Dr. Martin Luther King death rioting.

WHERE have the politicians been? What have the city council and the mayors done to help the city/people? NOTHING. But they TALK, wear fancy clothes, have nice houses, big cars, send their kids to colleges. And each batch of politicians does the same as the one before.

I also have traveled internationally. Baltimore looks worse than the underdeveloped countries I have visited. You reap what you sow. The so-called leadership of Baltimore, and its representatives to Annapolis and Washington, have made this mess.

Editor’s Note: Do you have a minute? Bill and his team would love to hear from you. We recently released this survey. It’s designed to help us connect with Bill’s “dear readers” and find the best research to share with you. It only takes a few minutes. Click right here.

Bitcoin has taken the spotlight in the financial world. But while most investors are focused on the cryptocurrency itself, the companies that use its technology will also be big winners in the years ahead.

To learn more about these companies – and how you can invest in them today from an ordinary brokerage account – click here. 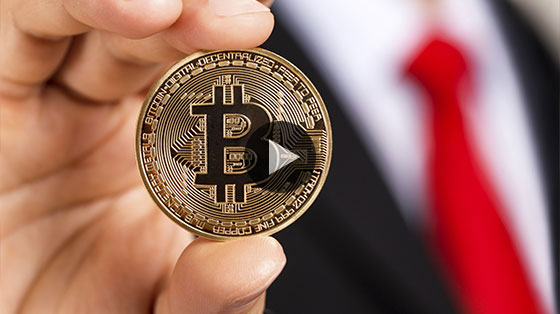