ARDMORE, IRELAND – And so… the big day approacheth.

People look for their registration cards… and prepare to cast their votes. Blue? Red? Liberal? Conservative?

It’s hard not to get caught up in the us-versus-them spirit of it. Like watching a football game, it’s more fun if you take sides.

But the trouble with elections is that one of the candidates wins. And the winner is almost always a bigger jackass than the other guy.

It hardly matters who you vote for anyway. Technology, evolving myths, and power relationships shape ideas. People always seem to think what they must think when they must think it.

And the Deep State makes policy decisions, no matter what the people think.

Bush, Obama, Trump – can you think of one thing any of them did to seriously challenge the Deep State? Did they cut the budget? Did they bring the troops home?

And now, another election… and another big distraction. No matter who wins, the agenda remains the same: more money, power, and status for the insiders; less for you. That will continue until the whole thing blows sky high.

Our guess is that the final blow-up is still a long way off. Because now, with the latest tech innovations, the elite have a new weapon: digital control.

Recall our coda from yesterday:

These are the two opposing forces – or controlling motifs – in public life: cooperation and violence. The former dominates the private sector and our personal relations. We go along to get along. In marriage, employment, and commerce, we seek win-win deals; if we don’t, no one will want to deal with us at all.

Violence, on the other hand, is for crooks, psychopaths, and governments. Dress it up with whatever honeyed myths you want; at the end of the day, government uses a big stick to get what it wants.

Now, combine this with another observation from yesterday…

No innovation was ever developed that wasn’t put into service by the Deep State, sooner or later. The Info Tech/Big Data revolution is no different. An economic bust, it did not increase GDP growth rates or incomes. But now, because it reduces the cost of controlling people, it is a threat to liberty…

The Info revolution – with the introduction of the internet and the proliferation of personal computers – was supposed to usher in a new age of economic growth.

But it did little or nothing to spur GDP growth, wages, or productivity. Mostly, it is a time waster… with the average person now spending five hours a day staring at his mobile phone. About half that time is spent on mindless social media sites that harvest users’ data.

But that doesn’t mean it won’t be a useful club for the feds. Au contraire, in China they’re already whacking people with it, combining the Big Data resources of the World Wide Web with the police state tactics of the Communist Party. And it’s working.

The system of “Social Credit” scoring is only in its infancy. People with low scores – which they get for jaywalking, speeding, late payments, posting “bad” things on the internet, having negative thoughts about the economy, etc. – can be refused travel on planes or trains, denied credit cards or mortgages (or forced to pay a higher rate), blocked from dating sites, or they can be cut off from the whole internet. Their children may be banned from the best schools, and they may be black-balled for good jobs.

In severe cases, such as that of the billionaire who published our own book, Family Fortunes, in China, a person can be completely scrubbed from society… disappeared… with no access to money, communications, or travel.

You may think the ordinary Chinese would put up a fight… resist this sort of totalitarian control (haven’t they had enough of that sort of thing?)

Not at all. While there are pockets of determined resistance, reports tell us that mostly, the Chinese like it (or, at least, that is what they tell reporters). They say they like it because it makes them feel safe; the “bad guys” are being culled from social interaction.

Already, we see similar beasts afoot in America and Europe.

In France, for example, rural drivers are forced to stay under 50 mph, even though they could easily and safely drive at 70 mph. It is now easy for the gendarmes to keep track of speeds. If you get caught, you lose points. If a driver loses too many points, he will also lose his license.

The French accept the system because it “makes them feel safe,” or it “reduces carbon emissions.”

Americans will buckle under, too.

For 15 years, they’ve stood in long lines, stripping off belts and shoes, and placing their medications, tubes, and lotions out in the open where the goons can see them.

Each of the millions of travelers know he has no intention of blowing up a plane – certainly not with him on it! – but he goes along with the comedy anyway. It makes him “feel safer,” say the authorities.

And in New York, the first hints of social credit scores may be making an appearance…

Two New York lawmakers are working to draft a bill that would propose a social media check before a gun purchase. Brooklyn Borough President Eric Adams and state Senator Kevin Palmer’s proposal would allow authorities to review three years of social media history and one year of internet search history of any person seeking to purchase a firearm.

People gladly surrender freedom if they think it makes them safer… especially if they think it also helps lower their mortgage payments. Americans will be no exceptions. And China is showing the world how to do it.

Governments worldwide are stepping up use of online tools, in many cases inspired by China’s model, to suppress dissent and tighten their grip on power, a human rights watchdog study found Thursday.

The annual Freedom House study of 65 countries found global internet freedom declined for the eighth consecutive year in 2018, amid a rise in what the group called “digital authoritarianism.”

The Freedom on the Net 2018 report found online propaganda and disinformation have increasingly “poisoned” the digital space, while the unbridled collection of personal data is infringing on privacy.

“Democracies are struggling in the digital age, while China is exporting its model of censorship and surveillance to control information both inside and outside its borders,” said Michael Abramowitz, president of Freedom House. […]

Coming soon to a neighborhood near you… We predict that it will be one of China’s most successful exports.

Today, we are checking back in on the 10-year to 2-year Treasury yield curve, which has been speeding towards inversion this year.

Simply put, a higher reading on this chart means that the difference between the two yields, or the “spread,” is increasing. 10-year Treasury notes are paying relatively more compared to 2-year Treasuries.

A lower reading means that the yields on the 10-year and the 2-year bonds are starting to converge… 10-year Treasuries are paying relatively less compared to 2-year Treasuries.

And when the reading goes negative, that means 2-year Treasuries yield more than 10-year Treasuries… which is known as an “inverted” yield curve. And as you can see from the chart below, an inverted yield curve has preceded both previous recessions. 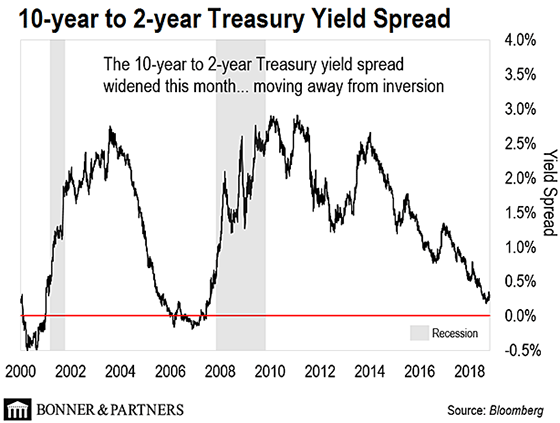 As you can see, the 10-year to 2-year Treasury yield spread widened last month… moving away from inversion. In fact, the yield spread has risen to 31 basis points… up from a low of 18 basis points in August.

This is good news for investors as it suggests that we likely have a little more time before the next recession hits. And this matches up with our most recent Doom Index reading, which suggested caution, but did not raise the crash flag.

U.S. Household Income Visualized as 100 Homes
Here’s an interesting thought experiment: Look at the distribution of wealth in American households, then represent it as 100 homes. Here’s what the neighborhood looks like.

A “Magna Carta for the Web”
As Bill outlined above, the idealistic vision of the internet from the early 90s is gone. It’s been replaced by data harvesting, “deplatforming,” and mass surveillance. One of the founders of the World Wide Web is appalled. And he’s planning to do something about it…

Anyone who can read and knows history can see what’s happening but it has been written and there is nothing you can do about it.

Hi Bill, other governments saw the writing on the wall years ago. They understood the worthless nature of U.S. bonds and our other wonderful debt instrument, the Federal Reserve Note. The Chinese, Brits, Japanese, Spaniards, and even the Russians have been using our worthless currency and debt to purchase real assets in the U.S. The Chinese almost have monopoly ownership of the Iron Range in Minnesota. Others have bought companies and commodities in our country. And currently, the price of gold has shot up in the past quarter because central bankers in other countries are buying for their reserves and investments. The end is near my friend.

“G-20 summit in Argentina,” Argentina? An interesting choice of venue for an economic summit. What are they trying to tell us? As for government contracts, it’s a bit complicated. Boeing’s 140,000-plus workers may have trouble agreeing with you. Overall I agree that we are waiting for the proverbial pin or that last piece of straw that is inevitably in our future. Like you, I am a long time expat viewing things from outside the fish bowl. Like trying to explain water to a fish, I’ve always found it difficult to talk to stay-at-home Americans who get all of their information from MSN, about how things really work. Thanks for the salient analysis you always provide.

GET YOUR FREE RESEARCH HERE

Jeff Brown, Bill’s top technology expert, just published a new piece of research. You can get your hands on Jeff Brown’s Tech Manifesto for free, right now. All you have to do is reserve your spot for tomorrow’s investing seminar. Details here.