YOUGHAL, IRELAND – “Really… at your age… you should know better.”

We had just come back from working on our derelict cottage on Sunday. We were recounting a heroic tale, with your editor as its leading man.

We explained how we were setting roof rafters in place, walking along the top of the wall, when the wall gave way.

We fell about 8 feet, but were unhurt.

There are young fools. And there are old fools. But men are essentially all fools.

They are designed by nature to do dangerous, difficult, and often, dumb things – to hunt, to fight, to race, to build, to compete for public office.

Then, after the dust has settled, they sit around the campfire and tell tales.

“That place is unsafe. Anyone can see that. You should have cleaned it up and fixed the walls before trying to work on it. And you’re working by yourself…”

Elizabeth was right about that.

The plan was to put on a tin roof, fast. Then, under shelter, we would take our time to reinforce the walls and take out the debris. But it was a foolish plan.

Nevertheless, we decided to stick to it. After a cup of coffee and a brief rest, we went back up on the wall and continued our work.

But now, it is Monday morning. And there’s a different kind of foolishness to reckon with. And different kinds of accidents, too.

At the end of last week came word that the U.S. economy is growing strongly.

But wait… what’s this?

Consumer spending was actually cut in half from the previous quarter? And Personal Consumption Expenditures are at a nearly five-year low?

Private sector growth was the weakest in six years?

And the only reason the number was so healthy – 3.2% – was because of inventories, imports, and government spending?

The tax cut was supposed to supercharge the private-sector, and it did – for a few quarters.

One of the key indicators is the government’s calculation of inflation, which they say was less than 2% in the first quarter. The figure is unreliable. Real prices, paid by real people, are going up much faster.

ShadowStats, which computes inflation the way the feds did it in 1990, puts the inflation rate at over 5%. If that were true, the U.S. economy is already in recession (nominal growth of 3.2% – 5% inflation = negative growth of 1.8%).

But though the feds’ inflation number may not give us much accurate information, the direction is telling. Inflation is not increasing; it is falling. This, too, signals weakness on Main Street.

The tax cut didn’t really cut the cost of government. It simply shifted it to debt… and onto the public and into the future. And now the future is coming into view. Spending is going down. Tax-cut savings have already been spent. The economy is slowing.

The idea of returning money to corporations – who got most of the tax cut – was that they would invest in new factories and new sources of wealth producing (including training and new technology). This “stimulus” would thus reverberate through the economy in new jobs and more output.

Instead, corporations took the EZ money… and took the EZ way forward. They bought their own shares, thus creating little real growth on Main Street… but contributing to a fake boom on Wall Street.

This was just the latest installment of the whole, sordid “financialization” story.

It causes businesses to forsake their real mission – satisfying customers by adding real wealth to the economy – in favor of EZ-money gimmicks and scams.

It shifts money from Main Street to Wall Street. Mommas want their babies to grow up to work with money, not with steel, or wood, or oil.

Incomes in the elite, financialized economy go up, while the incomes of those who make real things and provide real services go down.

Stocks rise, even though the businesses they represent stagnate. The economy appears to “grow,” even as most people become poorer.

And the longer it goes on, the more the entire economy begins to weaken and bend, becoming more and more dependent on the fake money.

That’s the story of today’s chart, which tracks annual VC investment in cryptocurrency/blockchain startups going back to 2011. 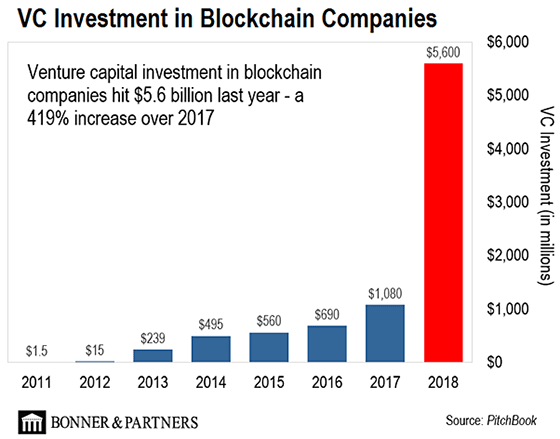 Blockchain technology can be applied to supply chains, online communications, and they can even be used to execute “smart contracts.”

Compare this to 2017, when VC investment only grew 57% year-over-year, despite Bitcoin shooting up nearly 2,000% from trough to peak.

This tells us that cryptocurrency and blockchain technology is not just a flash-in-the-pan fad… It is a maturing industry that is attracting billions of dollars from accredited investors.

And as Jeff Brown often says, anytime you see massive VC investment in one area, it is always followed by innovation and development that leads to fantastic investment opportunities.

P.S. If you want to keep up on the latest trends in technology, you can do no better than to read Jeff Brown’s work. Jeff is one of the few true Silicon Valley insiders. And he’s used his expertise to pinpoint the biggest technology investing trends years before they hit the mainstream.

Jeff just launched a new free-to-read newsletter called The Bleeding Edge. Sign up for free, with one click right here.

Debt-Forgiveness Legislation Picks Up Speed
As our editor said last week, “it’s grit and gumption that pay off; not college degrees.” But that hasn’t stopped politicians, like Elizabeth Warren, from pushing free college and debt forgiveness. And now, 20 U.S. states have hopped on the bandwagon… luring recent college grads by paying off their student loans…

Are Coupons Killing Retailers?
Brick and mortar businesses continue to struggle. Many blame Big Tech and e-commerce giants like Amazon. But for some retailers, like Bed Bath & Beyond, the downfall may not entirely be due to competition. It could be those beloved coupons you’re stashing…

Here’s Why You Must Have Cash
While trading strategies aren’t our go-to beat in the Diary, plenty of readers are wondering “what now?” With markets like these, master trader Jeff Clark thinks readers should follow one simple rule: Have some cash.

In today’s mailbag, dear readers talk Doom Index and capitalism. Will Bill be “putting away the crash flag soon”?

The game will continue as long as there are suckers, or fools, who believe. But my understanding is that China, Japan, and many European countries that historically bought large holdings of U.S. debt are no longer doing so, and actually may be net sellers. Even the Fed has possibly slowed or quit buying back bonds. And then we have JPMorgan Chase, buying large quantities of silver, and other central banks purchasing gold. I don’t believe it’s a fluke that your Doom Index just hit 8. Don’t forget to duck.

I like to bring up another indicator you may be familiar with: Sound Advice Indicator, which uses ratio of stocks to medial home prices. It has been triggered less than five times during the past century, each time a 50% drop in stocks occurred after. Its most recent trigger was in September of 2018, that’s the first time it’s happened this century. The last time it flashed was two years before the dot-com bubble, but it took two years for stocks’ bubble to burst. When it takes that long, it’s more than likely a coincidence. To me, the indicator can hardly take any credit. Unfortunately, you will be putting away the Crash Flag soon.

I just wanted to let you know, I think your missives are amazing! Please keep your great work coming.

Your essay on capitalism was spot on. We haven’t had it here in the U.S. or anywhere else. If it ever does exist for a short time, it is immediately “improved,” and that continues until it is unrecognizable, like it is today. It is pathetic that the social leaning among us refers to our current economic model as capitalism, when it was destroyed long ago by socialist policies.

If you’ve ever wanted to ask your favorite Bonner & Partners editors a question in person, this is your chance…

On September 23, we’re hosting the second annual Legacy Investment Summit in beautiful Carlsbad, California. But space is limited… so don’t wait too long. Go here for all the details. 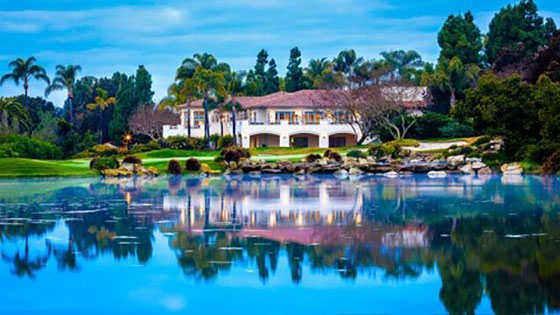