Necessity is the plea for every infringement of human freedom.

It is the argument of tyrants; it is the creed of slaves.

We wrote that about 20 years ago. Now, we will see it put to the test.

Forty years on, and we can scarcely remember – or even imagine – the 15% mortgage rates of 1980. And what has happened to the “bond vigilantes” who used to sell U.S. Treasury bonds at the first sign of runaway deficits? Surely, they are in wheelchairs, unable to recall their own names, much less how they lost their fortunes betting against the bond bubble.

And if the pattern holds, in a few years, we’ll regret not having locked in today’s low mortgage rates… if we can remember them!

After this downdraft has flattened the economy, interest rates (and consumer price inflation) should begin to rise. In another 20 years or so, rates should be reaching for another generational top. Perhaps you’ll have to pay 15% for a mortgage. Or maybe it will be more like 50%.

Or mortgage lenders could be almost out of business, as they already are in Argentina. If you want to buy a house there, you’ll have to pay cash.

Yes, it’s back to school. Now, we learn – again – why, for 180 years, U.S. dollars were linked to gold, rather than simply to promises from the U.S. government.

In a nutshell, it’s because the generation of 1791 (when the U.S. dollar first appeared) knew something the generation of 2020 has forgotten: Power corrupts. And the power to create “money” is so irresistible that no race, no nation, no genius, and no government official has ever resisted it for long.

Sooner or later, a “necessity” arrives… Usually, it is a “war”… or the threat of insurrection. (Rudolf von Havenstein, in charge of German money-printing in the Weimar Republic, said he had to do it to head off a Bolshevik Revolution. Instead, he got the Nazis!)

And now, it’s Rudolf von Powell who’s cranking hard on the printing press. In April, the federal government ran a deficit of more than $730 billion. That’s $1 billion every hour, Saturdays and Sundays, too.

What’s the necessity? First, they created an impaired economy, already on fake-money life support. Then, they shut it down in order to stop the spread of a virus. As a result, sales, profits, earnings, jobs, tax revenues – all are collapsing.

We’ve already seen that the Universal Lockdown was one of the most monstrous mistakes ever made by public officials. The odds of death are 1,000 times greater for an 80-year-old man than for a 30-year-old female.

It would have been relatively easy to protect the vulnerable groups (including your editor) until the threat had passed. Simply tell them the truth!

Most of the codgers are already retired anyway. Retiring from public life would be a piece of cake. It would have cost the economy very little.

Instead, the feds – led by know-nothing Donald Trump and know-it-all Anthony Fauci – took on a challenge… and turned it into a nationwide catastrophe.

Business came to a halt for wide sectors of the economy. Unemployment heads to 25%. GDP sank by roughly 10% in April – a figure not seen for the last 100 years. And Detroit is now on pace to deliver fewer new cars than it did in 1916!

Retail sales figures for April show the biggest drop in 70 years. And the biggest losses are in one of the only sectors to show substantial growth over the last 10 years – hospitality. Bar and restaurant incomes, for example, have been cut in half. One out of four restaurants is not expected to ever reopen.

Airlines, cruise lines, bars… tourism… thousands of businesses are calling their lawyers; “Uh, how does that Chapter 11 work, exactly?”

Private schools and universities, too… towns, counties, and state governments… households – Chapter 11 is going to be the most searched-for term on Google.

From Baltimore – a city already on the brink before the arrival of the C-virus – comes news that two of our favorite restaurants have gone out of business… And our grandson’s Episcopal day school has closed its doors – after 73 years! A letter from the school director told his parents that enrollments had plummeted as parents were either reluctant to commit for the Fall term… or didn’t have the money to pay the tuition.

Neither Wall Street nor Washington has even begun to reckon with the damage.

But all of that is just prelude to the real catastrophe.

Next up: We find out that printing fake money to cover the losses is an EVEN WORSE idea.

America’s paper money system began on August 15, 1971, when Richard Nixon somberly announced the end of the Bretton Woods system that fixed the U.S. dollar to gold. We’re 49 years into it already.

And if we’re right, the fake dollar – the green piece of paper that is in your wallet – should be history.

P.S. Our colleague and friend Tom Dyson has taken all of his money and invested it in the one asset that he believes will be safe from the coming catastrophe – gold. On Wednesday night at 8 p.m. ET, he’s going to tell us all about how he’s going to make this strategy work for him… and his family… for years to come. We’ll be joining Tom on the line. We’re eager to hear what he has to say. Perhaps you should, too – Tom believes that what he has to tell us could change our lives. Click here to reserve your spot.

P.P.S. Now into our tenth week in quarantine… and with the nearest liquor store over an hour’s drive… Elizabeth and I are lucky to have our own supply of wine from the vineyard. It keeps us going… 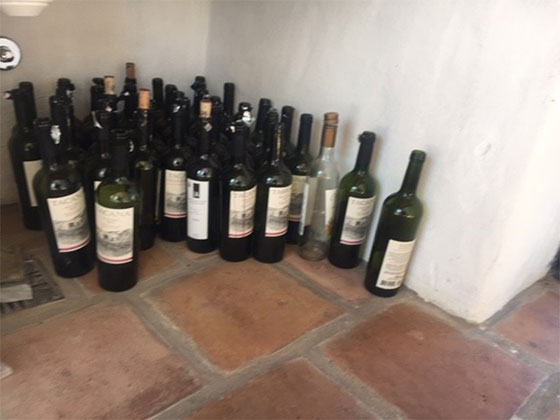