YOUGHAL, IRELAND – Today, we continue our story about the two things Warren Buffett values over all others – time and love.

This past weekend, President Trump revved up the crowd, threatening to put a 25% tariff on $200 billion of Chinese imports – on Friday.

“The United States has been losing, for many years, 600 to 800 Billion Dollars a year on Trade. With China we lose 500 Billion Dollars,” Trump tweeted on Monday. “Sorry, we’re not going to be doing that anymore!”

Let’s see, how does that work? We give a Chinese company our fake money. It gives us a real TV set. How did we “lose” money? And why is it any of Donald Trump’s business?

We don’t know. But was this just a negotiating tactic? A bluff? Or, is he really going Full Retard with his China trade war?

We don’t know. But if it was a bluff, the Chinese called it. “We will not take any step back,” they replied. “Do not even think about it.”

What now? Again, we don’t know. But we will keep our heads down until we find out.

Meanwhile, in an Irish bar, having dinner alone, an old man struck up a conversation with us.

“The Normans invaded in the 12th century and came right up the river,” he said. “You can see the ruins of the castle and the abbey; you can see them from your place. Down the hill. Beautiful.

“It was all abandoned… a ruin now it is… for longer than anyone can remember. Time passes. You can’t stop it. Not even the history books remember what it was like. I mean the castle. Who built it? There’s no record of it that I know of. So, it must have been abandoned hundreds of years ago.

“And around the bend from it, on the same side of the river, the English built a great house. The English were always the rich people around here. And the people who owned that great house were the richest of them. But that just shows that what everyone says is true. All their money didn’t bring them much happiness.

“It’s still there, of course, the great house. You can probably see that, too, from your new house. It’s down on the river bank. But the family members that owned it for hundreds of years are all gone.

“It was that family that built the church near the abandoned castle… and then, they built the little house up the hill. That’s the house that you bought. They built it for the rector of the church.

“Of course, the rector is long gone. He was gone before I was born. And the church – like so many Protestant churches in Ireland – it closed its doors in the 1970s. And now, it’s abandoned, too… just like the castle. And the abbey.”

“But that left the little house up the hill empty. In those days, there were a lot of houses in Ireland that were empty. A clever family moved in. They were poor. And they were Catholic. Katie was one of the children. So, naturally, Katie, after she left school, went to work in the big house next door.

“Well, Katie was working in the big house. She was pretty. And smart. And talented; she played the piano. And she danced. She was a great dancer. I remember watching her dance a jig. But that was a long time ago.

“And wouldn’t you know it, she and the owner of the great house fell in love.

“And then, they announced that they were getting married. And that was shocking. In those days, the big estate owners did not marry locals. And he was Protestant. She was Catholic. You just didn’t do that.

“But the wedding was all set. And then, he went to visit his brother in London. I don’t know what was said, but he made out a will, leaving Katie the little house, and he shot himself.”

“Why did he shoot himself?” we asked. It seemed like overdoing it, like treating an ingrown fingernail by cutting off your hand.

The old man leaned towards us. “They’re all dead, so I can tell you. But it’s so sad… and so delicate, let us say, we just don’t talk about it.

“Nobody knows for sure, of course. But there were insinuations in the press at the time. He shot himself in the heart – to make a point, I guess.

“One of the rumors going around at the time… mind you, this was 50 years ago… I’m one of the few people left who remembers these things… was that his brother might have told him something about his father.

“You see, the father had the reputation of being a bit of a rake. He had his way with the servant girls, it was said. And Katie’s mother worked there, too, as a servant girl.

“Katie, as pretty as she was, never took another man. She lived alone until she died.”

After a pause, he continued, still whispering…

“I don’t see any reason not to tell you these things. They bring no shame on anyone, as far as I can see.

“But that’s not the end of the story. The big house fell to rack and ruin, as they say. Finally, in the 1980s, it was sold to a couple from Europe. They spent millions of euros rebuilding the place.

“Apparently, she was from a rich family and had been kidnapped as a child. She didn’t want that to happen again. So, they spent a lot of money putting in security cameras and security gates. But that money didn’t save them, either.

“They’d come here to the bar, that was back when you could still smoke in bars, and they’d each smoke a couple packs of cigarettes. Well, wouldn’t you know it, she got lung cancer.

“By this time, all they had was their money… and each other. So, they decided that they would end their lives together by jumping, hand in hand, from one of those mountain viewing spots in Switzerland. You know, where you park your car so you can enjoy looking at the Alps. Pretty romantic, isn’t it?

“Well, they got to the spot and they were all set to jump off when along came a school bus. They didn’t want to set a bad example for the children, so they got back in their car and drove away.

“Then, they decided to move to Spain. I guess it was warmer there. They’d only been there a few months, I think, when she died. And then, he shot himself.

“He couldn’t live without her.”

“There, now I’ve told you more than you wanted to know.”

That’s the story of today’s chart, which maps quarterly gold purchases by the world’s central banks, going back to the start of 2017. 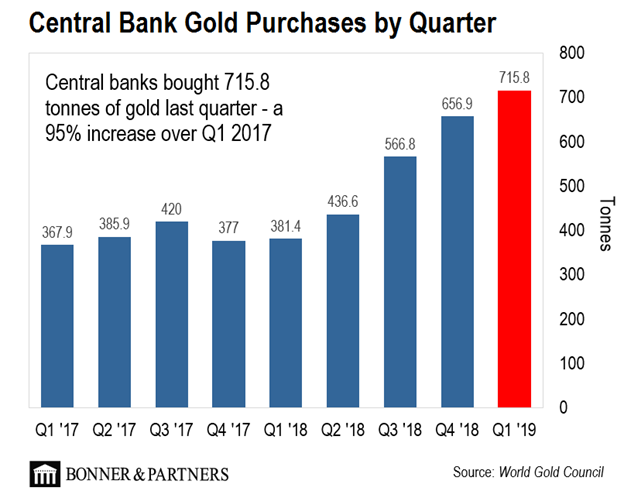 And that’s a whopping 95% increase over gold purchases by central banks in Q1 2017.

According to the World Gold Council, economic uncertainty is driving this rush to gold. Trade tensions… sluggish growth… and the prospect of lower interest rates are three big challenges weighing on the global economy. The world is moving towards gold as a reserve asset in the face of these challenges.

If the World Gold Council is right about a global shift to gold, this will be a multi-year trend that will lead to much higher gold prices.

The Many Theories of Trump’s Trade War
As our editor said above, we don’t know what’s going on with Trump’s trade war. Economists are also scratching their heads, trying to decipher the Great Disruptor’s tactics. But the ultimate question becomes whether Trump’s approach will replace the current status quo on trade agreements…

The Dark Future of Advertising
Imagine a world where your coffee machine, clothes, books, and facial expressions all create data points for advertisers… to target you. This isn’t some dystopian, sci-fi world. At the current rate, it’s what a 70-year-old in 2069 will call normal. In other words, the profiling and targeting of people has only just started…

A Sneak Peek of Bill’s New Book
Regular readers will recall that Bill has been hard at work on his newest book, Win-Win or Lose. He’s spent years researching and writing it. And after much anticipation, Bill’s manuscript is finally ready. But before we ship it off to the printer, we wanted to give Diary readers a sneak peek…

In today’s mailbag, a couple of readers talk about modern America. Are we better off today, or is there simply “too much greed”?

Are we better off today? Hell no. Bigger cars, trucks and houses. But all on more debt. I would go back to 1969 in a heartbeat! A really good year and fun time. Today, I’m cynical and angry. I’m heart broken for my kids’ future. Technology isn’t better. It’s a hamster wheel. A fraud. I hate all technology.

There is too much greed in the world, especially in America. They should have all young people in politics and let all the older ones retire because they are causing too many problems and causing the taxpayers (the little or poor people) too much. America needs to change. There is too much corruption.

Might I also point out that since America was formed, we have had roughly 30-year cycles under Conservatives, which mostly all ended with financial collapses, and 50-year cycles under liberal progressives, which were the greatest periods of economic growth in our history. Relative to those cycles, we should not have Trump as our president. It makes one wonder just how much the Russians really hacked our voting system, aye?

In short, it’s a unique type of security that can help you make 1,000% gains from big and small companies alike – without touching the stock market.

But this opportunity won’t last long. There are just two days left to get in on what’s being called “The Stock Market Escape Summit.” Read on here. 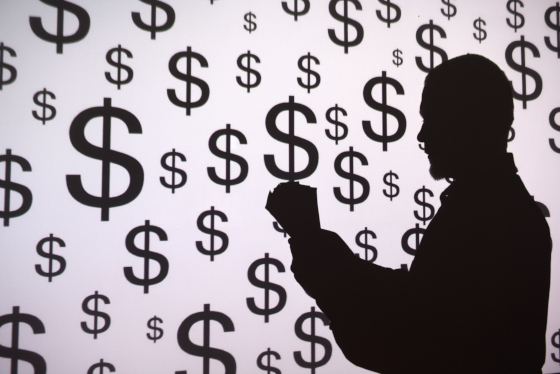