GUALFIN, ARGENTINA – We arrive at the end of the week.

Yesterday morning, the yard crew were putting up a stake on the Capitol lawn and laying around it a supply of tinder.

It was to be a small fire… hot and slow.

Brett Kavanaugh was duly tied to the post with his eyes wide open… neither offering an apology nor appealing to God for redemption.

The first match was struck when Christine Blasey Ford took the oath and began her “high-stakes testimony” to a panel of grave-looking senators, each pretending that the fate of the nation hung in the balance.

Ms. Ford played along, citing the “civic duty” that required her to tell what happened to her in a suburban bedroom 36 years ago.

And the august committee, along with the entire nation, was invited to spend another 100 million hours of its most precious and most irreplaceable resource – time – guessing which.

Committee members went to great lengths to treat Ms. Ford with the kind of cautious respect usually reserved for armed maniacs. None wanted to join Mr. Kavanaugh on the stake. They applauded her “courage” and thanked her as a heroine for coming forward.

We had our doubts. We wondered what a truly brave woman would have done. And is it really such a good idea to eliminate Supreme Court justices based on disturbing old memories that can’t be proven?

Shouldn’t she have told her parents… risking their displeasure, but getting a chance to right a wrong? Or maybe even forgotten the “uproarious laughter”… and shrugged off the incident as a learning experience? (Don’t go to parties with drunken teenagers!)

Instead, Ms. Ford turned the laughter into background music – almost a theme song – for her whole life. It explained so much, she said: her troubles in college and her troubles with men… therapy… and even her profession.

And now, with the whole nation looking… she had an opportunity to finally turn off the dreadful sound… to finally get even… to finally get justice… and to finally confirm that all her tears and fears were authentic and worthwhile.

What a glorious moment in the history of reality TV! Ms. Ford… girlish, even in her fifties… and still fragile and vulnerable…

But she was taking down a Supreme Court nominee, damaging his career, reputation, and dignity. And it was all on the basis of such an antique recollection; like an old sofa, surely it has been reupholstered, maybe several times. Mr. Kavanaugh didn’t seem to recognize it.

But the day’s circus events ended satisfactorily. The cameras smiled and the gawkers were pleased as Mr. Kavanaugh cried out in pain and anger as the flames roasted his feet.

“The whole thing just makes me sick,” said a friend.

Here at the Diary, we have no way of knowing whether Mr. Kavanaugh is an angel or a devil. But who cares; the stakes are trivial.

In the past, Supreme Court nominees weren’t asked how they treated their wives or what they got up to as teenagers. Many were probably cads or scoundrels; somehow, the Republic survived. One more rascal is not going to make any difference.

The real problem is that the Supreme Court has been derelict in its duty for the last 80 years.

It has failed to defend the Constitution against what Eisenhower called “unwarranted influence,” and what we call the Deep State.

And today, nobody who would pose a serious threat to the Deep State – Republican or Democrat – would be allowed anywhere near a seat on the court.

Meanwhile, the show goes on. The U.S. is going in the hole at a rate of $4 billion every business day. Both the bull market on Wall Street and the expansion on Main Street are nearing an end – with $250 trillion of debt outstanding worldwide.

And the president thinks Canada – Canada, with whom we have no trade deficit – has been cheating the U.S. for decades.

He also thinks the U.S. loses $800 billion a year in bad trade deals (we send foreigners fake money; they send us real goods).

But he told the United Nations that the U.S. economy is doing great…

And the Fed is delusional, too. As good as this economy is, it thinks it can make it even better by raising its key interest rate, putting it about even with consumer price inflation.

Early in the century, the whole silly spectacle would have been preposterous.

Nobody cared about a Supreme Court justice’s teenage sex life; they only cared if he was a decent judge. Nobody cared what the president thought of trade between Canada and the U.S.; it was none of his business.

And nobody would have imagined that POTUS would tell them with whom they could do business (the U.S. now “sanctions” some 30 different countries)…

Or that the Fed – we didn’t even have a central bank until 1913 – would decide who made money and who didn’t, transferring $4 trillion of fake money to the rich and not a dime to the working classes.

But that was then. This is now.

And today, we live with a Carnival of Claptrap that never stops.

Recently, the Fed released an updated Z.1 report on household balance sheets. The papers reported that household net worth hit a new all-time high of $107 trillion in the second quarter.

Hooray! This is the eleventh straight quarter of growth in household net worth, according to the Fed. But it’s all a fraud.

Well, not exactly a fraud. But look a little closer… 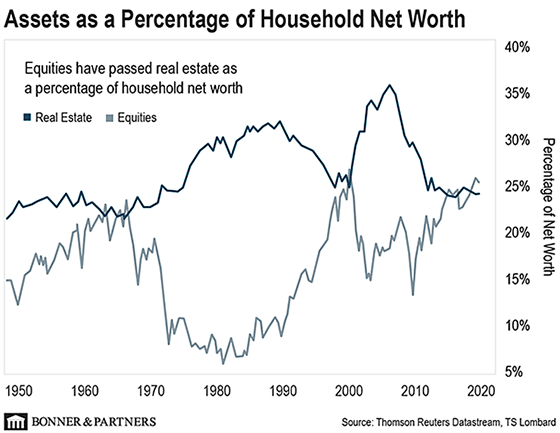 Throw in other assets, including cash and savings, of around $9 trillion, and you have a pleasant picture of American middle-class finances in which four assets make up more than 50% of total household net worth. (I’ve left out the various other asset categories that take the total to $107 trillion.)

I don’t need to point out – but I will – that both real assets (real estate) and financial assets (stocks and bonds) have received a tremendous tailwind from central bank balance sheet expansion and low interest rates. Stock prices float on a sea of $22 trillion of central bank liquidity.

Now look at the next chart… 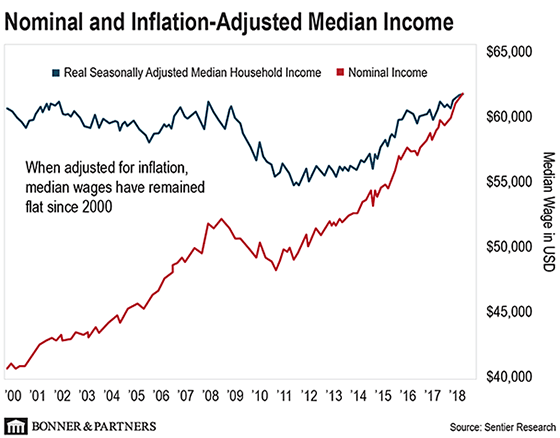 In nominal terms, median income is up about 50%, or $20,000, since the start of the millennium. That seems like a meaningful increase. But when you adjust for inflation, median wages have increased by 1.8% over almost two decades – essentially, nothing.

When we write about the “financialization” of the American economy, we mean an economy where you are asset-rich and wage-poor (or debt-rich and savings-poor). Main Street has become dependent on Wall Street to get wealthy through rising asset prices.

You can’t get a good job with a defined benefit pension, buy a house, send the kids to college, and retire at 65 in America anymore.

Household debt now stands at $15.3 trillion. That debt households have accumulated is real. It has to be repaid out of wages or savings, not out of financial asset price gains.

And if it CAN be paid out of capital gains, those assets have to be sold, creating selling pressure in the housing and stock markets if households decide to deleverage again.

Yes, perhaps we’re still “debt fetishists” here at Bonner & Partners. But you can’t get something for nothing, no matter how many stars you wish upon. The bill comes due eventually. And it’s our view that it’s coming due soon. The time to prepare for that is now.

P.S. America’s financial system is far more fragile than people realize. It is prone to collapse, either from its own complexity or external attack. Most people will find that hard to swallow. But if you value your financial independence, then the time to prepare is now.

Bill and I recently released new research that outlines a strategy to move your wealth out of harm’s way. It won’t protect you from all of what we see coming, but it will save you from the worst of it. Bill Bonner Letter readers can access it here. And if you’re not a subscriber, go right here.

How the Bull Market Could Ruin Your Retirement
The historic bull market in stocks has been good to Americans looking toward retirement. It’s padded 401(k)s with record highs and steady growth. But that’s a double-edged sword. History suggests slower growth, or even sharp declines, going forward. And that could spell trouble for your retirement.

How Facebook Gets Your Phone Number
Silicon Valley giant Facebook very likely knows your phone number. Sometimes, you give it willingly. But sometimes, it just takes it.

Walk Away From Data Stealers… Now
Facebook and Google make a business out of collecting, commoditizing, and selling your data. You might not care about that now. But Dan Denning believes it’s leading to something sinister. His advice? Walk away… right now.

When historians look back on the presidency of Donald Trump, they will see one mistake above all others: his trade war.

Trump seemed to think he could “win” it quickly, with little harm to the American economy. But he was badly in error. It is causing increasing inflation via cost increases for many items, while reducing international commerce, especially with China.

The 20% tax on washing machines, for example, has caused about a 15% increase in the passthrough cost to consumers, as importers have found ways to absorb or compensate for some of the cost to them.

Thus, American consumers ultimately pay the cost of Trump’s folly. Then, Trump complains about the Fed increasing interest rates in an effort to fight the inflation he is partially causing.

Trump’s trade war is following the pattern of Herbert Hoover’s trade war, which turned the 1929 market crash into the Great Depression. Hoover’s crash came first, but Trump’s crash is coming. At least Hoover did it constitutionally, letting Senators Smoot and Hawley take the blame. He didn’t claim some spurious “national emergency.” Trump’s depression may be even worse and could set the stage for even greater government control of our lives… perhaps for our first dictatorship.

Once again, Bill, you are only looking at half of the story on the trade war. The other half, the re-industrialization of the U.S., adds jobs and wealth, while hurting foreign sellers, unless they get smart, as the Japanese and European automakers did years ago in building their cars here.

But keep entertaining us with your missives. I love your travel accounts and your hands-on approach to building and renovating. But when it comes to economics, you seem too engulfed in academics. Economists, on the whole, have been wrong time and again. Example: The Nobel Prize-winning brains behind Long Term Capital. And what about The New York Times’ Paul Krugman?

DID YOU SEE JEFF BROWN’S ANNOUNCEMENT?

Jeff revealed why one of the biggest trends in technology is kicking into high gear starting November 14. It’s expected to unleash more than $12 trillion in wealth, and make early investors a fortune.

If you missed the announcement, you can review it right here. 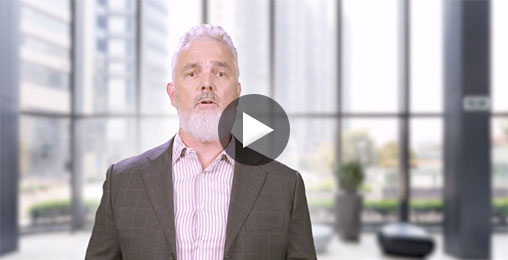