BALTIMORE, MARYLAND – We looked back yesterday. Today, we will look ahead. As we will see, the past casts its shadow over the future. Bloomberg is on the case:

Some of the most accurate gauges of economic health are pricing in lower Fed rates for the first time in more than a decade.

The little-known near-term forward spread, which reflects the difference between the forward rate implied by Treasury bills six quarters from now and the current three-month yield, fell into negative territory on Wednesday for the first time since March 2008. Two-year yields dipped below those on one-year paper in December.

“This is a crystal ball, it’s telling you about the future and what the market thinks of the Fed and what it will do with its policy rate,” Tony Crescenzi, market strategist and portfolio manager at Pimco, said in an interview with Bloomberg TV. “The market is predicting a rate cut at the beginning part of next year.”

A crystal ball? Probably not. The credit markets are warning of an approaching recession. And the stock market rang its bell last year when the S&P 500 peaked at around 2,900 in September – warning of a bear market.

But there are no crystal balls in the financial markets.

Markets provide information. It has to be new, surprising information or it’s not information at all. “Tell me something I don’t know,” says the investor.

That’s why the Fed’s price fixing of short-term interest rates is so destructive. The big players game the system. They know what to expect… so the risk of speculating goes down.

And since most speculating is done with borrowed money… the amount of debt goes up. Then, like an overloaded ferry, the extra debt weighs down the economy. Riding low in the water, there is still no guarantee the boat will sink. But watch out.

We’ll wait along with everyone else to see what Mr. Market will do. But we’ll keep an eye on the weather, too. There are patterns, trends, and moral lessons that make some outcomes more likely than others.

It’s not like flipping a coin where every flip is independent of the last one. A 20-year-old man may want a refrigerator with a lifetime guarantee. But a 90-year-old can save his money. Even a cheap icebox will probably last longer than he will.

And Mr. Market is a cynic and a spoiler. When he smells flowers, he looks for the coffin. And when he sees Humpty Dumpty sitting on the wall, he knocks him off.

The longer and higher the bull market goes, the less likely it is to continue. Why?

Because there are feedback loops and automatic stabilizers that bring an out-of-whack market back into whack. High prices bring low ones. And vice versa. And a boom built on stimulus gimmicks casts a particularly dark shadow; it always ends in a bust.

Mr. Market, of course, can do what he wants. Steel, concrete, and cabbages may be predictable. He’s not.

When something is widely expected, it usually doesn’t happen. Because, if you knew in advance what was coming, you would race ahead. It would be like knowing where you were going to have a fatal accident – that would be the last place you’d go!

But you don’t have to trust surveys to find out – just look at the prices. Real sentiment moves with the ticker. And currently, stocks are very expensive.

In terms of Shiller’s P/E ratio, which looks at share price compared to the past 10 years of earnings, stocks are almost exactly where they were in 1929.

Tobin’s Q ratio, the ratio of market value to a company’s asset replacement cost, is 1.08. Again, that puts stocks higher than in 1929.

And many other measures put stocks way ahead, too, breaking all records – stocks/EBITDA… stocks/PEG… stocks/sales and profits… stocks/corporate profit margins… Hussman’s margin-adjusted CAPE… stocks to disposable personal income… and Warren Buffett’s favorite – the Wilshire 5,000 to GDP…

By almost any measure you choose, stocks are near the top of their trading range, a point rivaled only by 1929 and 1999.

In these circumstances, you don’t need a crystal ball. You need gold. If you stay in stocks, you could lose half of your money… or more… and then wait 20 years or more to get even.

If you get out of stocks, you will only lose the potential upside, which doesn’t seem worth the risk. And so far this century, an investment in gold has beaten an investment in the S&P – even when accounting for dividends – but with much less risk or volatility.

Most likely, stocks will rebound a little early in the year. Then, with the holidays over and the effect of the eggnog and cocktails wearing off, investors will go back to their desks and their laptops.

They will rub their eyes and listen for another clanging bell. Suddenly, or gradually, it will become clear that the good news economy of 2018 was mostly a fantasy.

And then, a tinkling sound in the background… barely audible at first… will grow louder…

The tattered investor will shudder. And he’ll feel the shadow of 2018 creeping over him… the worst year since 2008.

He’ll look across the hall to the bond traders. There, he will discover that he can earn 2.64% on a risk-free 10-year U.S. Treasury bond.

Or he’ll look at gold. Late last year, while stocks were falling, gold was going up – about 6% over the last two months.

“That doesn’t seem like much,” he will say to himself. “But it’s a damned sight better than losing money this year like I did last year.”

As Bill noted in today’s Diary, stocks are still very expensive by traditional valuation metrics… even with the S&P 500 down 14% from its September high.

Our editor pointed to two traditional valuation metrics: the Shiller PE ratio and Tobin’s Q. Back in late October, we showed that the recent Shiller PE reading was high compared with the historical average.

Today’s chart tracks the Tobin’s Q ratio from 1920 through today. Tobin’s Q measures the market value of a company – as calculated by its stock price times outstanding shares – relative to the replacement value of the company’s assets.

The traditional interpretation is that stocks become more expensive the higher above 1 the ratio moves. And they are priced cheaper the further below 1 the ratio falls. 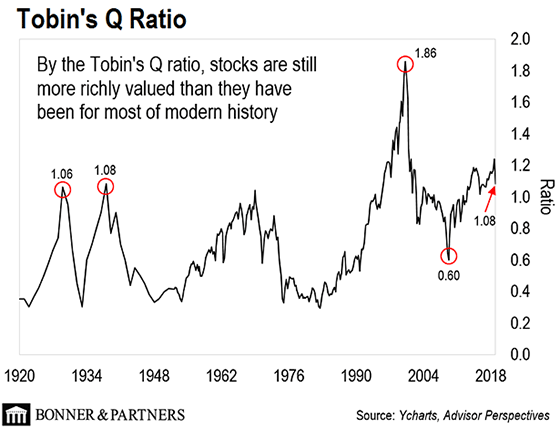 Even after falling from 1.24 in September to 1.08 today, stocks are still more richly valued than at almost any other time in the past century.

And as Bill mentioned above, the Tobin’s Q ratio says stocks are still more expensive than they were in 1929 – just before the onset of the Great Depression – when Tobin’s Q hit 1.06.

The rationale behind this ratio is simple. Creator James Tobin reckoned that the more a company’s market value exceeded its asset replacement cost, the more expensive the company’s stock must be.

And on the flip side, the more a company’s stock price fell below its asset replacement value, the more attractive that stock would be to investors.

As Bill wrote, there is no guaranteeing the future. But there are trends and patterns from history that investors can learn from. With Tobin’s Q near historic highs… and stocks showing signs of weakness… Mr. Market may be hinting that his next move is much lower…

Wall Street’s 2019 Forecast
As Bill wrote above, nobody knows what the future will hold. But the biggest of the big banks on Wall Street are willing to take a few guesses. Here’s a rundown of what they see coming in the year ahead…

A Preview of Bill’s Book
Our editor is hard at work on a special project: finishing his latest book. If you haven’t heard the news, go right here for a sneak preview.

In the mailbag, readers consider time, our ultimate resource…

Your essay effectively addresses THE commodity – time. Somehow, I suspect it is a key to how creation works. As I read your essay, I was reminded that I have advised patients of my practice over the years that the body can heal from most anything – cancer, infection, injury, cardiac arrest, and severed parts/limbs – if it has sufficient time to do so. It is a healing wonder. But still, time is the arbiter’s tool. Most often, it is not willing to stretch much, either. Wishing you the best during the rest of our time.

Bill, as usual, you have a way with words and of laying out a simple narrative. I love your take on time as the only precious wealth we have. It is a limited and fleeting asset, indeed. At 78 years of age, there are a lot of “could have, should have, would haves” in the wastebasket. But it leaves me with this question: In business and our personal dealings, we don’t measure debt only to income but also to capital to evaluate sustainability. Lenders consider debt service costs up to 30% of income as viable.

Why shouldn’t the same metrics be valid for global debt or national debt? Even a 5% interest cost stays well below that measure. Credit is used to build tangible assets such as homes, factories, and means of production. Isn’t that what produced the views across the borders from communist countries? Most of the credit is backed by those tangible assets, even some of the deficit spending of government. Your “fake” money bought real assets in China and raised their economic fortunes to challenge the U.S. leadership position. If it’s all fake, then why are we afraid? Inquiring minds like to know your take on it.

Hey Bill, I know I give you a hard time sometimes. But that was an excellent article. Time. Also, your story in the desert was well-timed. Oops! Berkshire’s investment in India’s Paytm parent company One97 reminded me of India doing the gold “RA.” Sure, we’ll hold it in our government vault… lol.

Well, you reminded me of something that lifted the clouds and a bright ray shone in. None of that sh*t actually matters much. I’m going to enjoy my sleep, and my coffee when I wake, my family, even my priest; that actually tells me I’m a good person, believe it or not!!! I’ll let time work for me. I’m 36 this month. I have a 4-year PhD degree in waste of time while selling real estate, and finance, crypto (which I won’t go further on), but it taught me how to trade technically. Maybe someday, you could meet me and my family and we’ll enjoy some Malbec together. Have a happy sleep and coffee by the logs, sir.

At the end of last year, with hardly anyone even noticing, President Trump made a surprising move…

The president signed a bill into law that opened up a multibillion-dollar market. Now, smart investors are staking an early claim in what could be the biggest investing story of 2019. Details here. 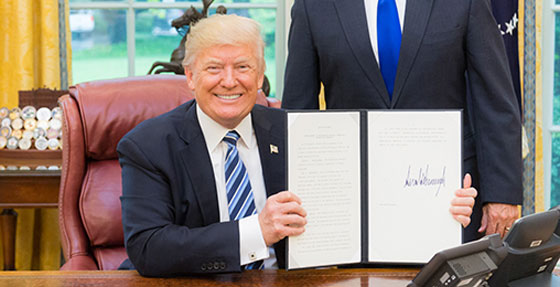