RANCHO SANTANA, NICARAGUA – The mainstream press seems obsessed by the harm being done to Americans… by foreigners.

Specifically, it is alleged that the Ruskies interfered and thus tainted the otherwise pristine U.S. presidential elections.

Iran and North Korea may attack on any day. And Mexico and China are stealing jobs and killing the economy.

Here at the Diary, we propose that all these fears be set aside.

Let us breathe the cool December air of quietude and confidence.

With Mr. Trump in the White House… Congress in session… the “Eye in the Sky” of 17 spook organizations… three generals at Mr. Trump’s right hand… and Janet Yellen and her merry band of crack economists on his left…

…what’s to worry about?

It is unlikely that foreigners – no matter how malign or talented – can do worse! Yes, dear reader, our heart swells with patriotic pride. We don’t need no stinkin’ foreigners to destroy the country; we can do it ourselves.

First, there is the GOP tax bill. We are still uncertain as to the details. So are members of Congress, who are waiting for lobbyists to work them out.

But the broad brushstrokes are so obvious, they must be visible from outer space: It is a scam.

Its real effect will be to enable the transfer of trillions of dollars more from the productive economy to the zombies, cronies, and Deep State insiders… leaving slower real economic growth and leaving most people poorer.

Yes, some people will benefit in the short run. But most will suffer as the years pass… as the tax bill will add $1.8 trillion or more to U.S. debt.

Then, with lower tax revenues and rising expenses from 70 million retiring baby boomers, the country will go broke.

Could foreigners do that?

Unh-unh… This is a Made in America disaster.

This first year of the Trump Team was critical. Voters elected a new team because they wanted a new direction. They wanted him to make the crooked straight and the rough smooth.

In their wisdom, perhaps they realized that the country was going off the rails and needed to be set right.

Or maybe they thought Donald J. Trump could wrest control of the empire away from Deep State insiders.

Or maybe they just wanted to shake things up.

All three of those goals were okay with us. But only one – the last one – was met. The nation is all shook up. But it is going broke faster than ever. And the Deep State is more in charge than it was under Bush or Obama.

At this point in the business cycle – with supposedly full employment, a red-hot stock market, and more than 3% GDP growth – the feds should be running a surplus. Receipts should be at record highs. Expenses should be low.

Instead, even in the best of times, the feds can’t make ends meet. The shortfall adds to the national debt at the rate of about $75 billion a month. By the end of the year, nearly $1 trillion will have been tacked on.

No one… until the cycle turns. Then we will hear people ask, “Who could’ve seen that coming?”

And yet, cycles always turn. That’s why they are called cycles: They go in circles, not in straight lines. Time goes in a straight line. But seasons, markets, fashions, and popular delusions are cyclical.

Prices go down. An economy goes into recession. And when that happens, all the cozy assumptions made to justify the tax bill go out the window and onto the lawn.

Then, deficits jump… and the cost of carrying so much debt increases, as interest rates go up, too.

At that point, it will be too late. The grain that should have been stored during the fat years will be nowhere to be seen.

Worse, crops for the next seven years have already been sold forward. And then, with the lean years upon them, what can the authorities do?

Borrow and print, of course! That’s what Zimbabwe and Venezuela did.

It worked for them, didn’t it?

Even in the regulatory area, Team Trump has done nothing a malevolent foreigner mightn’t have done.

Mr. Trump called financial regulation a “disaster” when he was running for president. He was right.

But now that he is in the White House, he sees things differently: There’s an advantage to having bureaucrats paid by the government protect his crony friends from competition and innovation.

From The Wall Street Journal:

Dodd-Frank’s excessive regulation helped cause the historically slow economic growth during the eight Obama years. In correcting for this Treasury should have proposed turning the FSOC [Financial Stability Oversight Council] into a consultative body, at most. Instead, Treasury now says that it intends to use Dodd-Frank’s most potent element even more aggressively than the Obama administration did.

Yes, dear reader, it’s business as usual. But what a relief it is to know that there are some things we Americans can still do for ourselves.

Today’s chart looks at the relationship between the federal debt (as officially calculated) and annual GDP. 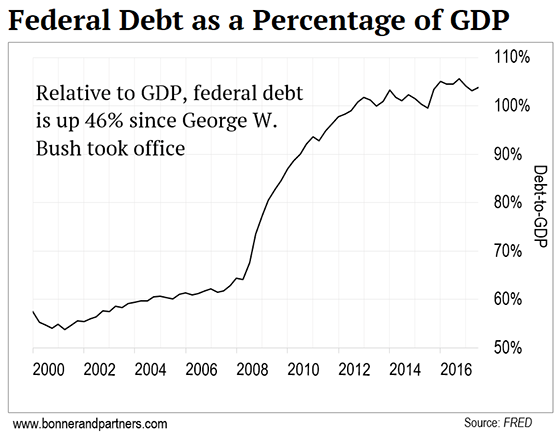 Bitcoin Hits Wall Street
Futures contracts for the world’s most popular cryptocurrency started trading over the weekend. And it started with a bang. Bitcoin surged as much as 26% as the first trading session went live.

In the mailbag, readers wonder if economists are really morons…

Definition of an economist: “One who holds the sheep while it is being sheared.”

The “science” of economics is a fairy tale made up by trolls to soothe the uncertainties of bot serfs.

I so appreciate your wry sense of humor, and that you are an equal opportunity tweaker, poking fun at everyone’s hero of the moment. I wonder, what is your take on the noted economist Ludwig von Mises? Surely, if von Mises were present at that assembly of thinkers attended by Mr. Ayer, and he had spoken and Ayer had listened, Mr. Ayer may have not been infected with and become so contagious with the plague of “logical positivism.” Thank you for your rueful insights. Wishing you and your family a joyous Christmas season.

Also consider other possibilities: BTC may be up 15 times in USD terms since January 1, but ETH is up 50 times; so if you measure things in ETH rather than BTC, BTC is a definite loser!

While watching the Coast to Coast AM bitcoin discussion a few minutes ago, my ongoing question arises again, especially with the opening of futures contracts. Can you get someone to explain objectively how bitcoin differs from the tulip (bulb) mania of the 17th century? And why, or if, we should expect a different outcome?

The mailbag is sometimes more entertaining than Bill’s musings. Case in point: Thursday’s included not one, but three such gems.

The lady who bought one share of Bitcoin Investment Trust and held it for a few hours before selling it at a loss even stated that this stuff is volatile. Uh… Volatile means that it will go up and down. If she had simply waited a few more hours, it likely would have gone up again. Hold it for a long time (what is that in today’s terms? A year? A month? A week?), and it likely would have paid her big time.

The gentleman who states that the Ethereum he bought is basically worthless because he cannot “…cash it out or use it to buy groceries or put gas in [his] car” can send it to me. Of course, he could also exchange it for whatever fiat currency he used to purchase it, and likely from the same exchange. Or he can exchange it for easier-to-spend cryptocurrencies. There are many. And there are more and more establishments accepting cryptos. But again, sending it to me is an option, too. I promise to make very good use of it.

The third thing that caught my eye was the discussion on Universal Basic Income. People actually support this idea? As Elizabeth pointed out by looking out her window, free money via welfare has done more bad than good. Why would anyone think a Universal Basic Income would produce any different results?

But he recently told us about what could be “the biggest speculation in history.” Doug gives all the details in a free masterclass training seminar this Thursday. Reserve your spot here. 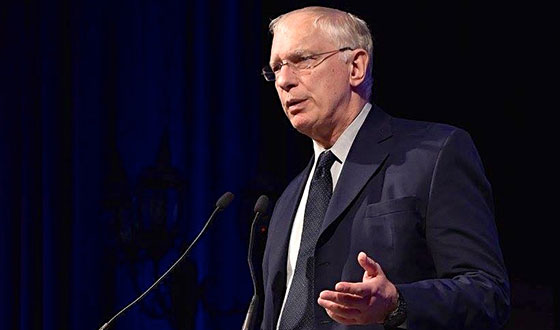