Editor’s Note: As Bill put it recently, America’s Federal Reserve has now abandoned any pretense of sensible monetary policy. Rate hikes are off the table this year. Wall Street cheered. But this decision has left the central bank with precious little ammunition. Come the next recession, the usual toolkit won’t suffice. The Fed will get desperate.

Today, Dan Denning, Bill’s coauthor on The Bonner-Denning Letter, shows how desperate, and reveals what it means for your portfolio…

Two years ago, former Fed Chair Janet Yellen suggested that the Fed could follow the lead of Bank of Japan (BoJ) head Haruhiko Kuroda and buy other things like stocks and corporate bonds.

She said the Fed’s conventional policy “toolkit” – manipulating interest rates and buying government bonds – might not be enough in an economic downturn (recession). She anticipated the day when the Fed might, “reach the limits in terms of purchasing safe assets like longer-term government bonds.”

Is that day now? It’s closer than it was in 2016. And if the recent yield curve inversion can be trusted to signal a recession, then the Fed’s “toolkit” may change soon, too.

Yellen said that in a recession in which the Fed could no longer use interest rates as a policy tool (because negative rates are the only place to go when you’re starting from a low base), “it could be useful to be able to intervene directly in assets where the prices have a more direct link to spending decisions.”

You’ll note that in both cases, buying assets thought to influence “spending decisions” had no measurable effect on stimulating spending or GDP growth. All it did was keep financial asset prices (corporate bonds in Europe and stocks in Japan) from falling apart.

In other words, it maintained an unhealthy status quo because that was preferable to finding out where the market would take prices if left to its own natural devices (mean reversion/crash/correction).

This is the equivalent of keeping a patient on life support because you know if you unplug him, he’ll die. In this case, the patient is the stock market. Beep… Beep… Beep.

Not really alive, but certainly not dead… yet.

Since Yellen made her statement in 2016, we’ve had ample proof that the Fed’s monetary policy since the financial crisis does exactly two things: makes the owners of financial assets wealthier and radicalizes the middle class (who are taking to the streets and throwing rocks through windows in greater numbers).

As a monetary policy tool, it’s a dud. As a way of making radical wealth-redistribution policies part of the mainstream political conversation, it’s been a huge success.

The Fed might also need to dip into its “unconventional monetary policy toolkit” if we see a deep recession, Reuters reports Harker saying while in Frankfurt, Germany. 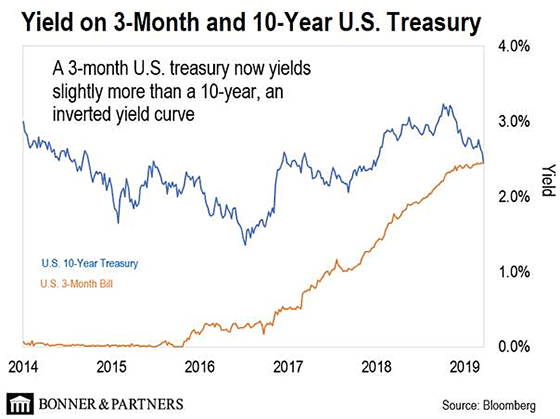 Harker also suggested the Fed could build more “firepower” by shortening the duration of the bonds held on its balance sheet. In 2011, the Fed used “Operation Twist” to bring down long-term interest rates.

This time, Harker is suggesting the Fed could buy shorter-term bonds and, perhaps, sell longer-term ones. Selling long-term bonds would send prices down and yields up (helping un-invert the yield curve). And by shifting more of its portfolio to short-term bonds, the Fed could move more quickly to “inject liquidity” into markets.

So, no… the Fed is not on the verge of buying stocks and corporate bonds… Not right away.

The wild card in all of this is a recession. Or “the recession.” The one we’re in right now.

If the inverted yield curve is correctly forecasting a recession, then the Fed may be forced back to its “unconventional toolkit” sooner than it thinks. And because a stock market correction/crash is likely to come before the recession, the pressure would be on the Fed to “do something” sooner, rather than later. That “something” could be buying stocks like the BoJ, or corporate bonds like the ECB.

You may be thinking that the Fed already intervenes in the stock market through the Plunge Protection Team (PPT). That’s the theory that the Fed, through shady intermediaries, buys S&P 500 futures to nudge the stock market up on down days (usually around 2 p.m. ET, or just before the opening).

Is the outright buying of equities – adding them to the balance sheet – any different?

It most certainly is. It would, again, confirm that the Fed is making all this up as it goes along… and that the situation is so desperate, that it’s not even trying to hide its manipulation anymore…

And that the bigger the bubble gets, the more desperate it is to prevent a reckoning. So let me be clear…

While it hasn’t happened yet, the Fed buying stocks is the next big trend in monetary policy.

That sounds about right to me, for a market-clearing sell-off in stocks and a big move into gold as a safe- haven asset, as the U.S. deficit goes full banana republic. You’d get a doubling of the gold price from here.

Just remember, Bill and I don’t view gold as a speculation. For us, it’s money. But it also serves as “wealth insurance” against a financial system that – due to its sheer complexity – is vulnerable to collapse.

You don’t buy insurance because you want to. You buy it because you can’t afford to live without it.

P.S. Like I said above, no one knows exactly what the future holds. But, our aim with The Bonner-Denning Letter is to get you on the right side of the trade. And by that, I mean not to trade it at all, but to preserve your capital and make it as safe as possible. That’s the purpose of the asset allocation strategy Bill and I unveiled last year.

It’s meant to simplify what is always an emotional decision (when to sell), and it’s based on the idea that your asset allocation has a bigger impact on your portfolio than your stock selection (especially in a bear market). Subscribers can access it here.

If you’re not a subscriber to The Bonner-Denning Letter, go here.