BALTIMORE – The stock market got a healthy bounce yesterday. Where it goes from here is anyone’s guess.

But you don’t have to guess. Because you don’t make money in the stock market from short-term moves. You’ll guess wrong as often as right, and you’ll end up getting nowhere.

It’s the big, long-term moves that make a difference. And the trouble is, sometimes, those moves last longer than we do.

Otherwise, you just wait. In gold.

Over the last hundred years, you would have multiplied your real wealth – measured in gold – more than 58 times (three round trips from five to 15).

As we saw last week, stocks are greatly overrated. You could have bought the whole Dow in 1928 for 10 ounces of gold. Then, you could have used those same 10 ounces to buy the Dow stocks again in 2013. The total real capital gain over 85 years: zero.

In other words, don’t expect any capital gains from stocks at all. What you can expect are dividends. But dividends are subject to income taxation.

In Baltimore, for example, federal, city, and state taxes together come to about 50%. So, if your stock pays a 2% dividend, you end up with a big, fat 1% net annual return.

And roughly half the time, your Dow stocks will be worth less than the cash (10 ounces of gold, on average) you paid for them.

In other words, your dividends will disappear in capital losses approximately one year out of every two.

Over the last 20 years, readers, colleagues, analysts, and family members have criticized us for “missing out” on the biggest stock boom in history.

But guess what. During that period, gold has done better than the S&P 500, even when you account for dividend reinvestment – without the risk.

People think they need to invest. They see ads with couples smiling approvingly at their statements. They think they will be chumps and losers if they’re not on top of their portfolios.

But a study carried out a few years ago showed that the best investors were, in fact, those who were least on top of the situation.

Looking at the performance of its clients’ accounts, asset manager Fidelity discovered what looked like a group of standout winners. These investors consistently beat the averages.

What was their secret? What can we tell our other customers, Fidelity wondered?

Well, the secret was that the best investors were dead. Their accounts just sat there, still open but inactive, accumulating and reinvesting gains.

Everybody wants better performance, but it’s a rare investor who will jump in the grave to get it. And it’s unnecessary.

What this shows us is that active investing doesn’t really pay off at all. Not for most people. Unless you are very lucky, or well-advised, you’ll end up losing money.

Choosing stocks… trading in and out… making investment decisions – rare is the investor who makes it work. And why should it work out for them?

A full-time, serious analyst – like our own Chris Mayer, for example – might earn a slightly higher-than-average return. But whence will come his profits? That is, if he makes more than average, someone else must make less. So who’s the loser?

Over the Long Run

That amateur watches the news. He hears that stocks “always go up over the long run.” And he looks back and sees proof – a huge run-up in the stock market over the last 36 years.

What he doesn’t know is that most of that gain is counterfeit. It was caused not by organic growth in sales and profits (the things that make businesses worth owning), but by inflation in the capital markets. The Fed pumped in $4 trillion; it went into stocks and bonds.

That flim-flam is at the heart of today’s economy and markets. Take away the $4 trillion of fake money… and the fake interest rates of the last 10 years… and the whole shebang would look completely different.

If you look at actual company earnings, for example – based on IRS filings – you find that U.S. corporations are earning not a penny more today than they did in 2006… and considerably less than they did in the last four years of the Obama administration.

Earnings per share have gone up, however, because corporations have used cheap credit to buy back their shares, thus reducing the number of stocks outstanding.

This makes the individual shares more valuable (there are fewer of them divvying up the profits). But it has the pernicious consequence of leaving corporate America with about 50% more debt – over $9 trillion of it.

That is, it leaves U.S. companies weaker than before, not stronger. They are now more vulnerable to the interest rate cycle… which seems to have turned against them.

And now, they will suffer more from President T’s cavalier tax cut and spending increases, which doubled the U.S. borrowing requirement and pushed up interest rates further and faster than before.

The combination of higher debt and higher rates will hit corporate earnings hard. Even before the yield on the 10-year T-bond reaches 4%, we predict investors will wish they had sold stocks and bonds… and bought gold.

Today’s chart tracks the iShares iBoxx $ High Yield Corporate Bond ETF (HYG) over the past 12 months. HYG is a corporate bond exchange-traded fund (ETF) with exposure to nearly 1,000 junk bonds in the U.S. 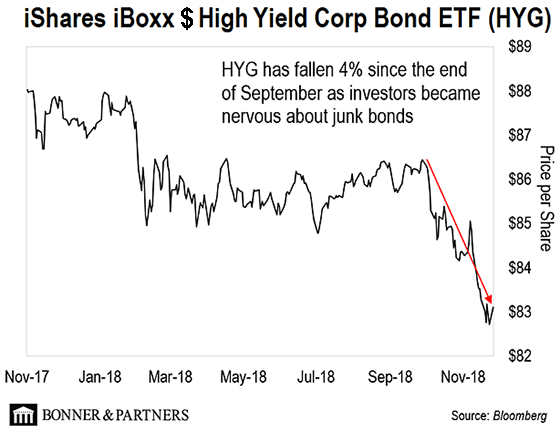 As you can see, HYG has fallen 4% since the end of September… And the junk bond ETF has fallen 6% since November 2017 as $3.6 billion has flowed out of the ETF over the past year. The S&P 500, meanwhile, has returned 3% over the same time.

These are relatively large moves in a short period of time for HYG. The ETF has not moved more than 20% in either direction since 2010…

We share this chart because HYG is a good leading indicator for the stock market. Junk bonds, with their higher yields and lower creditworthiness, can be viewed as a measure of investors’ appetite for risk.

When HYG trades up, it means investors are in “risk on” mode. It’s a pretty good bet that the stock market will trade up in that scenario.

But if HYG continues to fall from here… that’s a major warning that the next bear market is rapidly approaching.

The Myth of Capitalism?
America has long prided itself on being a beacon of entrepreneurial capitalism. But is it really? With entrenched monopolies, and fewer new businesses springing up, some are left to wonder if American capitalism is mostly a thing of legend…

The Biggest Losers in 2018: Everyone
2018 has been a brutal year for global markets. The S&P 500 is now slightly negative on the year. But it’s not just stocks. Everything from gold to oil, and even major currencies, is in the red. By some measures, this is the worst cross-asset performance in over a century.

After Bill’s Thanksgiving Diary, mixed reactions. Should we be thankful for Bill’s missives? Or is our editor just a “bitter person?”

God’s Blessings to you and yours, Bill. And I’m thankful for many things, including your missives!

Soviets, witch burners, and Faulkner? I like history; I don’t celebrate my mistakes, but rather the good that came from them. What a bitter person you must be to write this drivel. I can’t imagine that all you have to be thankful for is a pumpkin pie. This was sad.

It is true that citrouille is difficult to pronounce. So try the other French word for a pumpkin – potimaron. Not only that, any fool can grow them. There are loads where we live in Alsace. Keep writing!

Please be advised that in Canada, Thanksgiving has been a national holiday since 1879. North America’s first celebrated Thanksgiving took place in Newfoundland with the explorer Sir Martin Frobisher and the native Canadian people. We are so happy that the U.S. has continued with this lovely celebration of harvest. It is just too bad it does not align with harvest time.

Thank you… I needed that refreshment of age-old knowledge to remind me of my heritage, growing up in the 40s, cooking someplace between a campfire grill, a fireplace, and a gas oven. We survived here in Chicago then, and histories flowed from elders and uncles and neighbors and what we saw and felt at Thanksgiving… and sad things in abundance. The neighborhood gardens, surviving the first war, and the blessing of being here came as we were able to gather and enjoy loving each family member, and the stories breathed in joy as well as pain. Those were our Thanksgivings.

Are you attending this free event?

Tomorrow night at 8 p.m. ET, Bill will be sitting down with two other legends in the financial publishing business: Doug Casey and Mark Ford. These men will have a candid conversation on life, business, and their newest projects. Reserve your spot here… 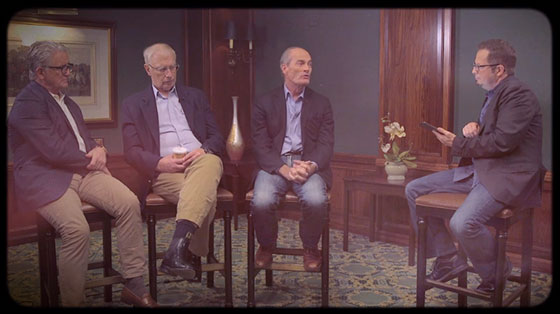