Editor’s Note: As Bill showed yesterday, the billionaires in Davos are hopelessly out of touch with the middle class. But there’s more to the story. Today, Bill Bonner Letter coauthor Dan Denning shows why today’s record stock market is an avalanche waiting to happen.

“America first does not mean America alone,” said Donald Trump during his speech at the World Economic Forum in Davos, Switzerland.

The president added that “There has never been a better time to hire, to build, to invest and to grow in the United States. America is open for business and we are competitive once again.”

By Trump standards, the speech was downright boring. But this is Davos. And Davos is a different crowd.

Imagine speaking to a room full of the richest, most powerful, most successful, and most egotistical politicians, businessmen, and journalists in the world.

You get the vibe.

If you’re not familiar with the Davos crowd, let me briefly introduce you. Former University of Geneva Professor Klaus Schwab founded the World Economic Forum in 1971. Its mission statement says the forum is “committed to improving the state of the world by engaging business, political, academic, and other leaders of society to shape global, regional, and industry agendas.”

Jamie Dimon from JPMorgan Chase summed up Davos well a few years ago when he said it was “billionaires telling millionaires how the middle class feels.”

It’s a lot of talking about problems by people who don’t have any (at least not money problems). It’s also become higher profile, with the attendees taking themselves more seriously, as global stocks inflate the wealth of the already-wealthy.

And to think they were all nearly snowed under earlier this week!

Wire service reports earlier in the week said some parts of Davos were under a level 5 (the highest) avalanche alert. That’s more than a little ironic, given that global warming and climate change are perennial topics at Davos. Nothing like talking about climate change when you’re buried under 14 feet of snow.

Of course, I hope no one got buried alive. But you’ll excuse me if I take the metaphor and run with it.

Davos has had six feet of snow in the last week and nearly three feet in the last few days. Reporters describe it as the big, heavy, wet kind of snow (there IS a difference between wet snow and say, the kind of crystalline powder you get here in the Rockies… but that discussion is beyond the scope of today’s letter). As a native-born Coloradan… that got me to thinking…

Instead of an isolated spot or overhang where gravity takes over and causes an avalanche, you get the whole side of a hill suddenly giving way, like a birthday cake sliding off a tilted picnic table. The helpful people at avalanche.org provide us with this image of how a slab avalanche forms:

Bearing that image in mind (with white frosting), now look at the chart below. It’s the Wilshire 5000, the broadest measure of U.S. equities. It includes the NYSE, the Nasdaq, the S&P 500, and the Russell 2000. All of them, by the way, made new highs this week. 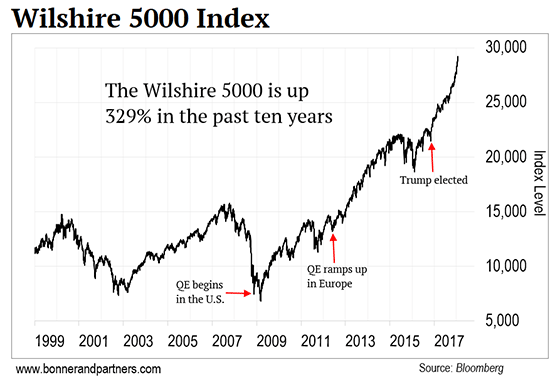 Use your imagination and view the oldest unstable snow at the bottom as the Ben Bernanke-induced stock market rebound from 2009 to 2012. The Wilshire 5000 went up over 100% in that short span, adding almost $7 trillion in market capitalization.

Then came more frozen liquidity (snow) from Mario Draghi. The president of the European Central Bank (ECB) made an off-hand remark in July 2012, right in the heart of the European sovereign debt crisis. He said the ECB would do “whatever it takes” to prevent a further crisis.

Just when Draghi’s magic seemed to be wearing off, Brexit sent the FTSE falling, and the rise of populism threatened to put a halt to QE as we know it, Donald Trump started making traction in the U.S. presidential primaries. Since Trump’s election on November 8, 2016, U.S. stocks have added nearly $7 trillion in market cap.

And let all skiers, snowboarders, and investors be warned. When you add $20 trillion in liquidity to the global financial system, it’s got to go somewhere. The new highs on the stock market tell you exactly where it’s gone. They also tell you we’re now at maximum danger for an avalanche.

But what will cause it? Another single snowflake, unique in its own way, with no idea how its featherlight touch is about to set off a landslide? Or will it be a clap of thunder? A bolt of lightning? Or a shot fired from a gun somewhere in, say, North Korea?

Yale’s Robert Shiller, winner of the Nobel Prize and inventor of the CAPE ratio, says bubbles don’t need triggers. Shiller told CNBC, “People ask ‘well what will trigger it (a market correction)?’ But it doesn’t need a trigger, it’s the dynamics of bubbles inherently makes them come to an end eventually.”

There’s a bit of circular logic there. Every story – every story that makes sense, anyway – has a beginning, a middle, and an end. That’s how we make sense of it. We find out where we are in the story. And we know that all stories end. In that way, stories are like market cycles.

The stock market is not a novel. But it is the expression of decisions made by human beings. And human beings, for better or worse, are human. We make meaning by finding patterns. Or we find patterns where none really exist and attribute meaning to them.

Either way, because we ourselves are finite beings – with a beginning, a middle, and an end – we see the world move in cycles. From birth to death. From comedy to tragedy. Or in the case of the stock market, from undervalued to overvalued. What now?

The Tragic Death of the Bull

If you’re like most of the people I’ve been speaking with for the last six months, you’re reading this with amusement, but no real worry. Besides, the International Monetary Fund has “hailed” the broadest upsurge in global growth since 2010. It’s revised its forecasts higher for U.S. growth in 2018, 2019, and 2020. And it grudgingly admitted that Donald Trump’s tax cuts could add 1.2% to U.S. GDP.

Never have so many worried so little about so much snow on the mountain top.

There are only three curmudgeonly voices of caution that I can hear right now. Myself, when I mumble in my sleep that George Bush was right, just ten years too early (this sucker’s going down). I can hear Bill Bonner, because when we worked on the latest version of the newsletter that bears his name, he said we should keep sounding the warning, but not expect anyone to listen.

And I hear William White. He’s the former head of the Bank for International Settlements. He told The Telegraph, “All the market indicators right now look very similar to what we saw before the Lehman crisis, but the lesson has somehow been forgotten.”

Still, perhaps me and the two Bills have it wrong. There IS a case to be made for a melt-up from here. Even though fourth-quarter U.S. GDP came in at 2.6% (lower than the expected 3% and held back by rising imports and a larger trade deficit), the stock market has stormed ahead.

According to sentiment surveys, investors don’t seem to think a bear market is possible because the feds won’t let it happen. Or they’ve never lived through one.

Let me tell you, if they’re not fatal, brutal bear markets from these levels are near-death experiences in investment terms. If you’re in Davos – or in the stock market – batten the hatches and make some cocoa. And don’t slam any doors.

P.S. Even the IMF’s chief economist knows something isn’t quite right with the “Goldilocks” scenario the bulls have put forward. Maurice Obstfeld told The Wall Street Journal that, “Stock markets are booming in a lot of countries that have not had tax cuts.” Why the boom?

Obstfeld is worried about rising interest rates. That’s the shot that could send stock and bond prices tumbling down on investors’ heads. Writing in his blog, he concluded that, “As important as they have been to the recovery, easy financial conditions and fiscal support have also left a legacy of debt.”

No matter what they say, it’s the same old story. We have an economy and a stock market built on debt. The bigger both get, the more unstable they become.

Editor’s Note: If you enjoy reading Bill Bonner’s Diary, then you won’t want to miss this free event. Bill will be sharing a stage with legendary speculator Doug Casey to show readers how to profit from what Bill calls “The Trade of the Century.” Get all the details right here.