POITOU, FRANCE – It was a slow week, interrupted by the Fourth of July holiday.

Stocks bounced around a bit, going nowhere special. Even the Trump Show had been relatively calm, with no new ratings boosts.

Rumors of a deal on auto import taxes helped buoy up stock prices yesterday. Electric car maker Tesla’s share price was falling; rumor has it that Elon Musk is running out of time and money.

And bitcoin seemed to be recovering a bit.

But this morning, at 12:01 a.m., the shooting began. Donald Trump started his latest war. Bloomberg:

Remember, “war is the health of the [Deep] state.” This will be no exception.

Meanwhile… poor Scott Pruitt was in the news, as he has been since his arrival in Washington.

Despite all the news focus, we have not mentioned him a single time in these Diary entries. What was there to say? The man was like a road sign; everything about him seemed so obvious.

The former Environmental Protection Agency (EPA) chief was watching fireworks on the White House lawn on Wednesday night. Come Thursday and he might as well have been a Bolshevik, a terrorist, or a Democrat.

His pass key was canceled and Washington cackled as he packed up.

In the space of only 12 hours, the great shining star of the fossil fuel industry was cast from the firmament of Trump Heaven into the deep sea of the administration’s has-beens.

And what was his crime? What was his sin? Ostensibly, Pruitt has been accused of “ethics violations.” Chief among them is his renting of a room from the wife of an oil lobbyist.

But as far as we know, he just did what was asked of him. He was a loyal spear carrier, even backing The Donald in his trade war. Washington insiders should have loved him.

Except for a brief and forgivable term as a lawyer at the beginning of his career, Pruitt has spent his entire adult life as a politician. He never had an honest job or earned an honest dollar.

But Washington lives on money taken under false pretenses by sleazy chiselers posing as world improvers. Pruitt should have fit right in.

“What went wrong?” is the subject of the following few words.

Pruitt’s entire career was a classic; it was spent at the beck and call of one crony industry or another.

At one point, egged on by local producers, he even sued the state of California on behalf of Oklahoma’s farmers, to force the opening of California’s market to eggs from Oklahoma’s caged chickens. The case was thrown out, but the egg-mongers were suitably grateful.

And earlier in his career, he had even lived with lobbyists, joining with them to buy a house near the action in Oklahoma City.

Pruitt was no stranger to the ways of the Swamp, in other words; coming to the nation’s capital, many thought he might teach the locals a lesson or two.

But there was a problem with Pruitt. Out on the Plains, he saw how easy and delightful it was to suck from the bottle of homemade hooch; thereafter, he never could graduate to anything better.

His taste buds had been forever burnt and scarred by the local brew; the more sophisticated vintages of national politics were lost on him.

In 2003, Pruitt had run for Congress and lost. But he wasn’t beaten.

He got together with Oklahoma City millionaire Robert A. Funk and bought the Oklahoma City RedHawks, a minor league baseball team.

Pruitt was earning $38,400 per year as a state senator at the time. His contribution to the $11.5 million purchase price couldn’t have been much. But he would find ways to hold up his end of the stick.

Whether it made any money for Pruitt or not, we don’t know. But ownership of the baseball team helped get his picture in the paper.

This would be useful to him going forward, and to the people who bankrolled him. It helped build his cred, too, as a local hero, eventually getting him elected as Oklahoma’s attorney general.

It was a big step up; his legal experience had been focused only on defending Christians in religious cases.

It hardly mattered. The top legal position in Oklahoma City, as in Washington, can be filled by any political hack. There are assistants to provide whatever legal opinions are wanted. Often, none are.

Likewise, at the EPA, no knowledge of chemistry – or science of any sort – is required. But you have to be able to play ball… and not just in the minor leagues.

It was not enough to fawn over the president and pretend that the commander-in-chief was a genius.

Nor did he fail to live up to the code of all swamp critters: When he was bought, he stayed bought.

Nor did strict adherence to the Canon of Claptrap – according to which public officials are supposed to make better deals for people than they could make on their own – save him.

The problem with Pruitt was neither ideology, doctrine, nor politics. It was simply that he thought too small.

He was a punk hoodlum who had suddenly been put in a major crime syndicate. He had neither the wit nor the manners to pull it off.

The big-city feds were skillfully, quietly moving trillions of dollars from the patriots to the Deep State insiders… and there was the small-timer Pruitt angling for a job for his wife… and a break on his rent!

Just as if he were back in Oklahoma.

In a town in which grand larceny is admired and emulated, Pruitt’s petty crimes were démodé, like stealing a pencil from a blind man or failing to leave a tip at the Capital Grille.

At the end, Pruitt was the subject of no fewer than 13 separate investigations by the Government Accountability Office.

He called attention to himself… and posed an unnecessary risk to the entire operation, like getting drunk and driving too fast when you are on your way to rob a bank.

Platinum, often considered the third-most precious metal behind gold and silver, is tanking in 2018…

That’s the story of today’s chart, which maps the S&P GSCI Platinum Index – a global benchmark for platinum prices – from the start of 2017 to today. 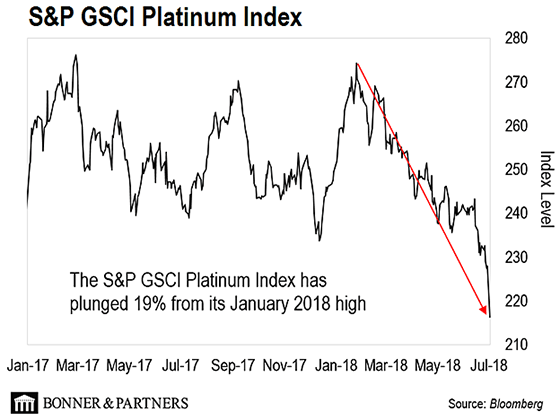 As you can see, the S&P GSCI Platinum Index has plummeted 19% from its January high.

The blossoming risk of a trade war is one of the reasons platinum prices have plunged this year.

Platinum is used by automakers in catalytic converters… and the auto industry accounts for roughly 40% of global demand for platinum.

But tariffs on imported vehicles would cut into demand for new cars. This would lead to reduced production of automobiles… and therefore, reduced demand for platinum.

Scott Pruitt’s Thirteen Sins
As Bill outlined above, former EPA chief Scott Pruitt couldn’t keep his name out of the papers. Here’s a list of 13 “petty crimes” that landed him in hot water.

Oil: $150 a Barrel
In recent years, oil companies have been pressured to pass on earnings to investors through dividends and share buybacks rather than investing in new oil wells. That decision may come back to haunt the oil market as a “super spike” looms…

The Final Assault in the War on Cash
For years, governments and central banks have been waging a “War on Cash,” a trend of policy decisions to ultimately do away with physical currency. Now, Bill’s coauthor on The Bill Bonner Letter, Dan Denning, believes he’s uncovered what the final assault will be.

In the mailbag, Bill’s story of “the Cajun in Paris“ rustles a few feathers…

It is pretty obvious your Louisiana friend has never actually talked with an educated (three degrees) and affluent (million-dollar-plus net worth) supporter of Donald Trump. He is just repeating the same tripe you hear on MSNBC or CNN about Trump supporters being ignorant hillbillies with no money, who are not jet-setting, globe-traveling sophisticates like yourselves. Maybe you are talking to the wrong people in order to get educated.

Truly your Cajun friend in Paris is out of touch. I am retired, have an income over $1 million, have three college degrees, an international driver’s license, and have worn out several passports; all of which is to say that “I LIKE TRUMP” and will vote for him again. He is the first president in a long time that can evidently read a P&L statement. Yes, I do have a Bible and a gun.

I agree there are major problems now and down the road, but I do question your acquaintance’s categorization of current Trump supporters or antagonists as uneducated and lower/middle class versus educated and wealthy.

My card-playing group of nine includes seven with advanced degrees. All are extremely successful business people; one is a former CEO of a Fortune 300 company, and three own private jets. All voted for Trump (look at the alternative – Hillary or Bernie) and still support him. Yes, they all cringe at his tweets and mannerisms, as well as his lack of decorum. But they firmly stand behind his actions, including his Supreme Court nomination(s).

Also, they all believe that no other Republican candidate would have defeated Hillary. I know my sample is small, but not as small as the media would make it appear.

I don’t know where your Louisiana friend got his ideas about those who support Trump. Age did not seem to enter the criteria much. Wealth and education seemed critical. In our town of Tallahassee, Florida, Trump has supporters and critics from all sides, classes, and ages; but younger folks tend to not care for him so much.

The story about the Cajun in Paris should be followed with this line: “A good Cajun never leaves.” This is an obvious truth for those of us who still live here – even those such as myself, who traveled the world in the oil business. Nowhere else is even close to the life we live.

A most appropriate entry into Mr. Bonner’s Diary. Thank you. And happy Independence Day to all!!

I often want to let you know how much I enjoy and am enlightened by your Diary. Your knowledge and insight are a welcome and invigorating read. But alas, typically, I feel like it wouldn’t mean much. Today’s entry really resonates, as I love history and I have shared similar thoughts on America, although not so eloquently. You are making a difference. And you are shining a light on those pesky dots!

Seldom do I write letters to the editor, but I am breaking my silence to thank you for the Wednesday, July 4th Diary. Often, I do not agree with you. However, many times I do. On Wednesday, you nailed it. Even though I am a graduate electronics engineer, I am a sometimes student of history. I have not read all of the missives you mentioned, but I have studied some history of the Roman Empire.

Unfortunately, our Republic has followed the same path. Except, if I remember my history correctly, it took Rome far longer to become an Empire. In my view, it took us less than 100 years. 1860 was the beginning. Abraham Lincoln deemed it necessary to set aside the Constitution several times in prosecuting the war. That was the beginning of the end. Again, thank you.

The economy is growing, and stocks remain near all-time highs. But behind the scenes, something strange is happening…

The U.S. government and global financial elites are considering implementing a radical new change to America’s money. If passed, the money in your bank account would fall firmly under government control.

They call it “The Chicago Plan.” 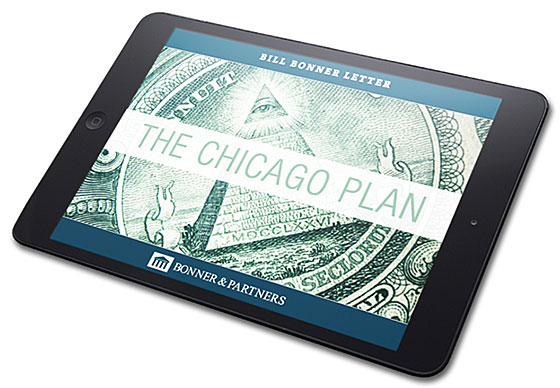