WATERFORD, IRELAND – Let’s begin by feasting, like a vulture (many thanks to the Dear Reader who suggested it in today’s mailbag), on this morning’s roadkill headlines:

Headlines of the Future

As for the stock plunge, the mainstream press is coming around to our point of view: Interest rates are going up; stocks are going down.

U.S. stocks fell to two-month lows after a nine-day swoon, erasing their gains for the year. Thursday’s 3.8% loss took the S&P 500 Index’s decline since its January 26 record past 10%, meeting the accepted definition of a correction. The Dow plunged more than 1,000 points.

We get the news no sooner than anyone else. Many times, we’ve tried to guess what tomorrow’s news will bring. We have done enough tests to know that either it can’t be done reliably… or we are no good at it.

But that doesn’t stop us from trying.

Herewith, for what it is worth, we look at the headlines for the months ahead.

Note that any similarity between these headlines and actual events is purely coincidental:

May 9, 2018 – The Wall Street Journal: “Powell Has Little Room for Maneuver, Say Fed Watchers; Should Have Tightened Sooner, Critics Charge”

June 22, 2018 – Trump Tweet: “Time for Republicans and Democrats to get behind my plan. We need an extra $2 trillion of investment in education, police, and military. Put people back to work. #MAGA”

Today’s chart is of an old favorite here at Market Insight – the CBOE Volatility Index, or VIX.

Known as Wall Street’s “fear gauge,” it tracks investors’ expectations of how dramatic the price swings (aka volatility) will be on the S&P 500 over the next 30 days. 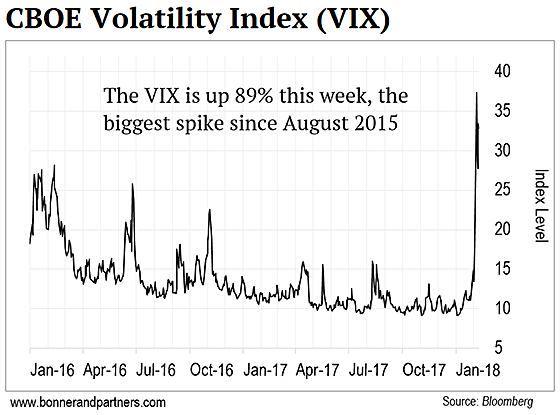 The last time we saw a spike of this magnitude was in August 2015.

Five Steps to Avoid Investing Disaster
As Chris Lowe showed, it’s been a volatile week in the stock market. Many investors are rethinking their investing strategies. Here are five rules you can follow to protect yourself from the unknowable.

This Is Officially a Correction
A correction is broadly defined as a 10% fall from a recent or all-time high. And after getting off to a great start in 2018, stocks have now officially entered correction territory.

What 99% of Investors Don’t Understand about Cryptocurrencies
It’s not just stocks; cryptocurrencies have also been plummeting. But according to Jeff Brown, Bill’s top technology analyst, now could be the perfect time to buy into the crypto market. Here’s why.

In the mailbag, yesterday’s Diary, “The Age of Inflation Is About to Begin,” has gotten one reader thinking…

I’ve enjoyed reading your emails and getting your take on the world of finance… but I’m a little confused by what you’re saying today… The stock market is propped up on nothing but phony money – I think everyone can agree with that. The banks have used all that free money to pump up the markets to amazing valuations…

When the market crashes because the value of the dollar is going back up (the overnight rate hasn’t made it prohibitive, yet, to trade the free money), do you really think the pedal will be put to the metal on the digital printing presses again and will pump that market back up again?

As far as I can see, the Fed has no regard whatsoever for the economy as a whole, or the job market, as is obvious from the ludicrously phony numbers on unemployment. The Fed is only concerned about getting their cut from the 2% inflation that the owners/members of the Fed have been relying on since the ’30s… Interesting times.

Meanwhile, Bill’s recent reflections on war and human nature have drawn some comments…

Your agonizing question about WWI may already have been answered by Erich Maria Remarque, whose character, Tjaden, in All Quiet on the Western Front, asks, “Then, what exactly is the war for?” To which his comrade, Kat, replies, “There must be some people to whom the war is useful.” Unfortunately, the Deep State of the time found the war sufficiently useful to loot Europe, continuing the butchery almost to the point of extinction.

As to your second question about the church celebrating the flower of European youth who were sent to the slaughter, is it really a celebration? Or perhaps might it be more an expression of mourning for the senseless waste of beings created in the image of God?

Well, well, well. Saint Bonner doesn’t pick sides. He neither criticizes nor offers solutions. I know you’re just an observer trying to connect dots and provide comic relief along the way. How very brave of you. You say you don’t have a dog in the fight… maybe. The vulture, too, is dispassionate about who wins or loses; it just waits on the outcome and then feasts on the remains. This is neither bad nor good; it’s just the way nature is set up. You seem to follow this model.

I don’t understand how you can be mystified by wars and why men continue to die generation after generation. To use the market as an analogy, what I have been taught is that nothing moves higher forever and that corrections are normal and can be expected. Wars are nothing more than corrections for the human race.

I laugh out loud when I read the negative feedback you get from your daily Diary. Those angry trolls either take themselves way too seriously or they just don’t get your point (which is to make us think).

I am a veteran who considers himself relatively conservative, and I love the way you make me rethink some of my opinions that I thought were set in stone. I am grateful I came across your writings a few years ago. As long as you write it, I will read it. And I will continue to laugh at your writings, your haters, and most importantly, myself!

Did you attend last night’s event?

The thousands of readers who attended had the chance to get the details on Bill’s “Trade of the Century.” Then, Doug Casey revealed how he used the same strategy behind Bill’s trade to make a fortune. If you missed the event, you can catch a replay right here. 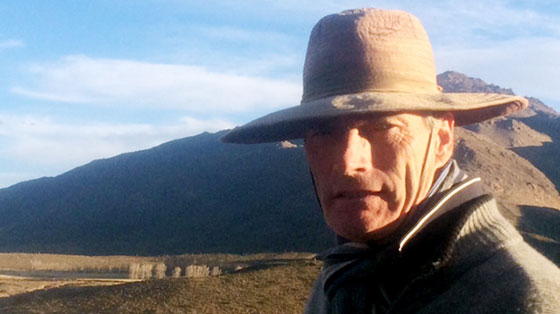