BARCELONA – The Dow stumbled yesterday, ending down some 425 points.

Nothing serious. More importantly, the yield on the 10-year Treasury note has crept up towards 3% this week, briefly hitting the milestone on Tuesday [more details in today’s Market Insight below].

But our old friend, economist Mark Skousen, writing in The Wall Street Journal, says the underlying economy is stronger than people think.

The Bureau of Economic Analysis will release its preliminary first-quarter growth figure on Friday. According to the Atlanta Fed consensus tracker, economists are predicting gross domestic product to have risen at a meager 2% annual rate. But a powerful behind-the-scenes indicator suggests the real rate may turn out to be significantly higher.

“Gross output,” or GO, reflects the full value of the supply chain – the business-to-business spending that moves all goods and services toward the final retail market. Based on my work and research by David Ranson, chief economist at HCWE & Co., changes in the supply chain are a strong leading indicator of the next quarter’s GDP.

Our guess is that the economy is weaker, not stronger, than people think. The low unemployment number, for example, masks a weakening picture for real jobs, with more people working more jobs that don’t pay very much.

And high stock prices make people think that they are richer than they really are – and more willing to spend money.

For the last 30 years, household net worth has risen about twice as fast as the underlying economy. Stock prices, in other words, are not based on real output.

And there is still no net gain in household income – despite 110 months of growth (the second-longest expansion in history) – for the entire 21st century.

As we reported in Monday’s Diary, our colleague David Stockman uncovered that wage growth has kept pace with inflation; no more, no less.

There are never any sure things in economics. Instead, there are always surprises. And perhaps Mark is right; the surprise will come on the upside.

We went to visit the pride of Barcelona yesterday, the Sagrada Família, an extraordinary cathedral designed by the extraordinary architect, Antoni Gaudí.

A view from inside the Sagrada Família

Gaudí was a devout Christian. He saw the cathedral as a way to express his profound, and perhaps very original, faith.

The Sagrada Família is breathtaking. And it shows what you can do when you are daring enough.

Gaudí began the building in 1882. He kept at it – off and on, sometimes living onsite – for the next 44 years.

Then, crossing the street, he was struck by a tramway car and died. At that point, people were still not quite sure whether he was a genius or a fool, but they knew he was extraordinary.

Thousands of them came to the funeral and accompanied the body into the crypt of the church he had designed.

We have done a little “experimental” building ourselves. But we are not worthy so much as to gather the crumbs under Gaudí’s table.

Every detail of the Sagrada Família, from the doorway to the soaring towers to the windows and altar, is staggeringly new and bold.

Boldness in architecture is usually a sign of arrogance and conceit. Most often, it is a dismal failure. And for good reason.

It took hundreds of years for the pleasing, familiar shapes of traditional architecture to evolve.

These, and many of the “classical” shapes that we take for granted, are physical forms of condensed wisdom, information, and style.

They’re like that for a reason – like language and manners – even if we don’t know what the reason is.

That’s why so many of America’s most recognizable landmarks (the U.S. Supreme Court, the Lincoln Memorial, even the White House) take cues from the architecture of the classical age. It is unlikely that a modern architect is going to improve on them.

That’s also why almost all the innovation of the 20th century was so ugly and dysfunctional; after World War I, architects consciously rejected the past.

And when you do that – whether you are rejecting traditional work ethics, economics, religion, marriage, manners, morals, or aesthetics – you risk creating monsters.

The Russians, for example, rejected the conventions of bourgeois capitalism and created the Soviet Union.

Meanwhile, architects the world over – such as those of the Bauhaus school – intentionally stripped their buildings of the ornaments and refinements of the past in order to give them a new, modern look.

And in economics, to which we will return until we are sick to death of it, classical economics was rejected in favor of claptrap modern theories – especially those of John Maynard Keynes.

The result? A monstrous mess…

Gaudí’s work is exceptional. Yes, it looks a little like it escaped from some eccentric’s backyard and has been enlarged 1,000 times.

But it is breathtakingly original and refreshingly sui generis. We have seen hundreds of churches… but none like the Sagrada Família.

By Joe Withrow, Head of Research, Bonner and Partners

As Bill reported, the 10-year Treasury yield is on the rise…

Today’s chart tracks the 10-year Treasury yield from the start of 2013 through today. 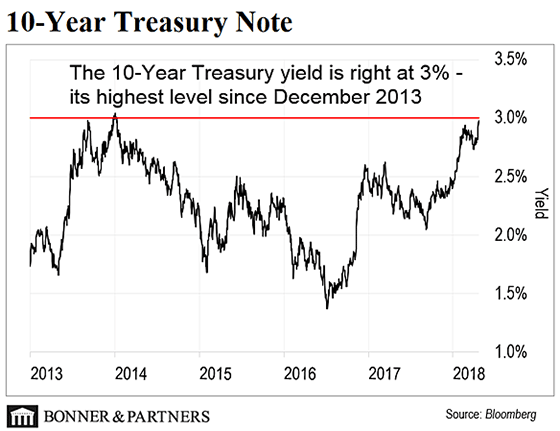 As you can see, the 10-year Treasury yield bottomed at 1.4% in July 2016… and has risen to nearly 3% today. That is its highest level in more than four years.

The yield on the 10-year Treasury note is one of the most watched indicators in finance. That’s because it has a major influence on mortgage rates.

Also, when yields rise, borrowing costs for businesses rise. That tends to reduce profitability and makes it harder to drive returns for shareholders.

Americans Are Preparing for the Bear
As Bill reported, stocks are on shaky ground. The Dow tumbled 425 points yesterday. And now, a new survey suggests that the majority of Americans expect more pain ahead.

Why Facebook Could Crater U.S. Stocks
If Facebook users do abandon the platform, that could send the share price of the tech giant plummeting. That’s not just bad news for Facebook; it could endanger the entire bull market.

In the mailbag, one Dear Reader ponders Bill’s missives on Catalonian independence…

Speaking of the Catalonian independence movement, do you imply, Bill, that the American independence war was merely the replacement of one political system by another?

Correct, of course; but America was rather thinly populated at the time, compared to Britain. The founding fathers tried to set up a system catering to the individualism which the thinner population fostered. As the population increased over time – especially in the northeastern states that were politically dominant – the movement toward centralized political opinion took hold, as it was also doing in Europe at the time (though nationalism caused variations there). Improved communications played a huge part in this, giving politicians better knowledge and control of mass opinion. Asia, with its big population, but relatively limited communications until more recently, is now joining the trend, as is Africa.

South America may be slower because of its relatively lower population density. Population density and communications seem to be the main factors behind the trends. Communication, especially through the internet, spreads a variety of opinions, thus breeding strife of one sort or another. But it also is subject to control by those in political dominance. See China, for example.

Hear, hear! In fact, as a practical matter, speech is the method of expression that society prefers people to use when they are angry, hurting, hating, or otherwise full of negative emotions directed toward others. A song, an essay, or a shout are preferred over lawsuits, physical harassment, bombs, arson, and attacks of any other kind. Hate speech is the best way to express hatred – so much so that it is common among young children and teenagers while causing minimal damage to social relationships.

Even one of the worst exercises of speech, voting for someone else to use violence against others, is socially accepted, though it might be better for society if the advocate of violence actually committed the crime in person (assuming some of the intended victims will be armed). Hate speech should be encouraged, not bottled up. The same goes for speaking the truth. Let us know if you have any problems with Google. I’m pretty sure we can take them down (consumers have more power than they know).

P.S. Cutting the rattle off a rattlesnake to prevent one offense might lead to another – less acceptable – one.

When I was in college at the Université catholique de Louvain in Belgium from 1960 to 1963, we had a class on moral philosophy. All I remember is: “Nos droits sont basés sur nos devoirs” – meaning that our rights are based on our duties. An American corrected this by replacing duties with responsibilities. This subtlety still escapes me, but I do judge a lot of things based on the French statement.

I enjoyed your last Diary, and I’m appalled to hear of the rumblings from Google on possibly banning your writings. It reminds me of Aleksandr Solzhenitsyn describing the 60 million-plus Christians, scholars, and nonconformists who were murdered in Russian death camps in the last century, and his plight when he wrote about it in his book, The Gulag Archipelago.

I do not happen to be politically correct, and it bothers me when less than 1% of the population changes the way we use public restrooms, what is preached from the pulpit, and many other restrictions on our free speech. Many made fun of our former governor, Jesse (“The Body”) Ventura, when he brought to light numerous staffed camps in the U.S. that could house 10% of our population. Maybe we’ll be cellmates in the future, that is, if they can find you.

As a continuation of the “offensive speech” Diary, I saw something where an English headmaster was dismissed when he wrote of a retiring teacher in his school, “We all now know every really great teacher has to retire some day and Mr. X will do so at the end of this term.” This seemingly harmless bit of news was found offensive by the retiring don, who claimed that the acrostic (of the first six words) was highly “offensive” to him. My apologies to your British readers who find the term “offensive,” but it does go to show that the earnestness of academics brooks no room for humor or cleverness, unless they are on the “winning” (not “losing”) side of the argument.

Shame on them. I know what you’re going through. From experience, the strong and vigilant work at demanding justice. You have my support.

I often disagree with you, but I like you. You’re sort of like the crazy, but lovable uncle. Or the grumpy, old man Walter Matthau. But I would stand up for you any day in court and burnish and burn your vicious vitriolic enemies.

The government will assassinate bitcoin…

That’s the shocking message from Casey Research analyst E.B. Tucker. E.B. believes that the government could effectively kill bitcoin as soon July 21. Even if you don’t own any cryptos, you need to see this message. 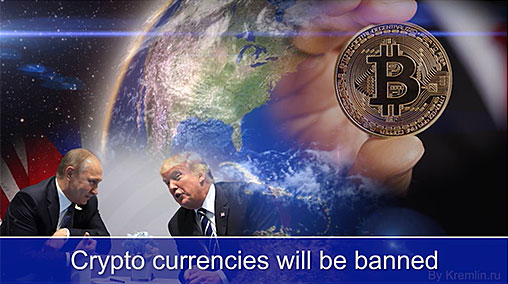