It doesn’t matter whether it comes in one year or four. If you don’t start preparing now, you will maybe do better while the economy continues to do okay, but whatever gain you get from that will be overwhelmed by problems with your investments in the downturn.

YOUGHAL, IRELAND – “Big news this month,” begins a note from our research director, Joe Withrow. “Our Doom Index ticked up to 9.”

The last time this happened, all Hell broke loose a few months later…

Major banks went broke, and Wall Street needed to be bailed out by the Federal Reserve. General Motors and Chrysler, too, would have gone under without federal help. And in September of 2008, Fed chief Ben Bernanke told Congress that “we may not even have an economy on Monday” if it failed to pass its TARP (Troubled Asset Relief Program) bill soon.

When the dust finally settled in March of 2009, stock market investors had lost half their money… and 7 million people had lost their homes.

In gold terms, the losses were even more severe… and part of a more revealing picture.

Stock investors were on top of the world in the spring of 1999 – which was probably the all-time peak for the U.S. too. Thereafter, it was downhill in almost every way.

But let’s see what’s happening now… Then, we’ll come back to Joe’s warning.

The Dow Jones Industrial Average moved up 182 points to a new record yesterday. Behind it was the idea that the trade war is close to an end.

But trade moves on trains, trucks, planes, and ships.

The Transportation Index hit a high about a year ago. It has since stubbornly refused to corroborate the industrials’ bull-market story.

Most likely, the run-up in stock prices this year is just a financial move – a product of Fed rate cuts, hype, buybacks, and momo algorithms – not a genuine boom in the real economy.

In the hype category is the latest news from the trade war.

Donald Trump could never afford to go Full Retard in the trade war. It would have been disastrous to him personally as well as the nation. And now, with an election coming up in 12 months, he has to back away from it.

The Chinese lead dog faces no election; he can take his time. But The Donald needs a deal and is prepared to accept almost anything that isn’t too embarrassing. And his standard for embarrassment is low.

Most likely, the “deal” will take us back to where we were when the trade war began. Mr. Trump will claim victory. His fans will cheer. And – except for the losses that can never be recovered… and the foreign producers who have come to see that they can’t rely on their U.S. customers – things will go back to normal.

The trouble with normal, though, is that it doesn’t stand still. Normal is restless, footloose, and homeless.

The Trump campaign slogan – “Make America Great Again” – has become “Keep America Great.” But between the first slogan and the second, nothing much changed.

Normal? Yes. But the normal thing is to expect change. And after such a long run of growth, the normal change to expect is non-growth (aka recession).

The expansion that was born in 2009 is now geriatric, older than any in U.S. history. It still totters along, using a cane. But the longer it lives, the closer it comes to the grave.

And here is the report from our research department, with an update on our Doom Index. Joe:

Big news this month: Our Doom Index ticked up to 9. The last time we hit these levels was the first quarter of 2008… and we know how that turned out.

Our analyst Houston Molnar has been working with me on this. Here are his highlights for this quarter:

The slowdown in the real economy has made its way into the credit markets. In fact, credit growth has slowed 81% since the start of this year. For the quarter, we saw credit expand by only 1.8%.

In the bond market, we are seeing twice as many downgrades compared to upgrades. 771 bonds have been downgraded so far this year. That’s the most downgrades year to date since 2009. Of the 771 bonds downgraded this year, 522 of those were junk bonds. The junk is getting junkier.

The Fed is nervous. As you know, they are back to their old tricks. It’s “Inflate or Die.” Houston provided an updated chart of the Fed’s balance sheet for us. They’ve fired up the printing press again: 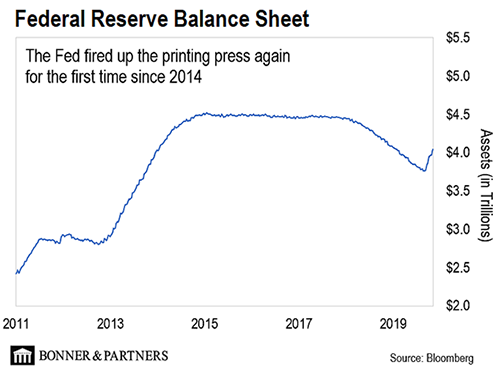 So, bottom line is the numbers are falling apart.

Stocks are hitting new nominal highs right now because the financial news is saying we’ve got a trade deal coming.

But the cracks are widening beneath the surface… and it appears the powers that shouldn’t be are starting to panic. We suspect your Dow-to-Gold ratio will serve as important investment guidance in the years to come…

Publicly, the Fed may be saying that the U.S. economy is “in a good place.” But our economists – including our own Joe Withrow and Houston Molnar – and theirs are all looking at the same vital signs.

And all of them must be thinking: Time to call the funeral home.