U.S. economic growth was a bit stronger than initially thought in the second quarter, notching its best performance in nearly four years, as businesses boosted spending on software and imports declined.

Gross domestic product increased at a 4.2 percent annualized rate, the Commerce Department said on Wednesday in its second estimate of GDP growth for the April-June quarter. That was slightly up from the 4.1 percent pace of expansion it reported in July and was the fastest rate since the third quarter of 2014. […]

But the robust growth in the second quarter is unlikely to be sustained given the one-off drivers such as a $1.5 trillion tax cut package, which provided a jolt to consumer spending after a lackluster first quarter, and a front-loading of soybean exports to China to beat retaliatory trade tariffs.

We stop… and hold our breath.

Is the tax cut really working? Is the economy really strong? Should we stop doubting… put on a MAGA hat… and buy the Nasdaq?

Then… after a moment… we come to our senses.

Most of the news/opinions on economics is fraudulent, shallow, or dumb. The “facts” are often made-up nonsense… and the analysis is no deeper than a tweet.

In the GDP numbers, for example, what truth do we find? The feds “print” dollars… lend them out at less than the rate of consumer price inflation… and then measure how fast they change hands.

What does that tell us?

But the feds don’t stop there. They come up with schemes and hustles… encouraging people to do dumb things.

Most of GDP is based on consumer spending. Give consumers more cheap dollars, and GDP will go up. But where does that leave them?

Not content with throwing households down a well, the feds jumped in themselves, too. They spent about 17% of GDP.

If they were to take an extra 1% from taxpayers – say, to buy some drones or hire some more TSA agents – at least it would be an honest flimflam. But it would have no immediate effect on GDP.

Out of one spender’s pocket and into another’s.

If the feds borrow the money, on the other hand, GDP goes up. (If economies could get richer from government borrowing, there would be a lot more rich economies on the planet. Instead, the biggest borrowers – whose GDPs have been goosed up by deficit spending – are the biggest disasters.)

Then, if the feds really want to boost GDP, they cut taxes, too. This increases not only their own spending, but consumer spending as well – both by borrowing more.

Consumers – happy to be reunited with their money – spend it… thereby producing more churn.

But wait… Who will pay back the money the feds borrowed? The same taxpayers who just got a tax cut? The same consumers who just spent the feds’ cheap credit?

By the way, these are the same people who now earn the same wages, more or less, as they did when the U.S. president was wearing a sweater and a WIN button.

The average American worker has gotten no increase in real earnings over the last 44 years, and now – as inflation rises – he is actually losing real income.

But, lured by the Fed’s low teaser rates, consumers have gone on a borrowing/spending spree. Households owed about $5 trillion in 1998. Now, it’s about $15 trillion.

And household debt now sits at 80% of GDP. With the exception of the heady years before the financial crisis, this is the highest level in American history.

Adjusted for inflation, debt rose about twice as fast as income.

Is that supposed to make Americans richer?

And what about government debt? While wages went nowhere, federal debt soared from $1.7 trillion in 1998 to $21 trillion today.

Again, compared to economic output, we see that government debt is 105% of GDP. The only time that ratio has been higher was during the 1940s, when the government was borrowing to fight a World War.

Even adjusted for inflation, Americans collectively owe about eight times as much today as they did 20 years ago.

So, let’s see… We have some new drones somewhere… and more TSA agents poking through our underwear.

Our economy is said to be growing (spinning dollars) at a decent rate. And there are plenty of low-paying, part-time, pick-up jobs available for those who want them.

But we (consumers) owe, individually, more money than ever. Thanks to government borrowing, we also owe more jointly than ever before. And our wages are slipping…

The dollars fly around… but is anyone better off?

As Bill wrote above, household debt – the combination of consumer debt and mortgage loans – has exploded relative to GDP over the last six decades…

That’s the story of today’s chart, which tracks U.S. household debt as a percentage of GDP from 1952 through today. 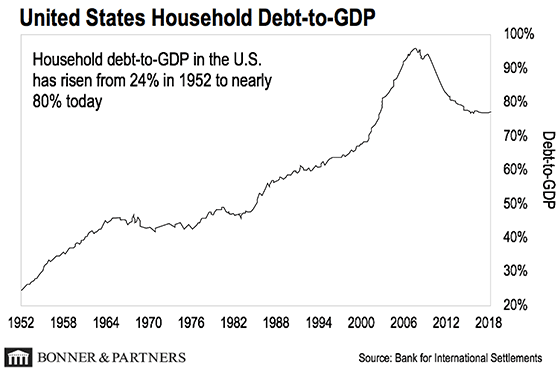 As you can see, household debt-to-GDP is more than triple what it was when Eisenhower was elected. And it’s well above its historical average of 58%.

Why should you care?

Households take on more debt to buy things like new homes and cars. That gives the economy a short-term boost as automakers and home builders hire more workers. But later, highly indebted households may need to cut back on spending to repay their loans. That’s a drag on growth. And as the 2008 crisis demonstrated, a sudden economic shock – such as a decline in home prices – can trigger a spiral of credit defaults that shakes the foundations of the financial system.

As interest rates rise, and the cost to pay off all that debt increases… look out below.

Why American Workers Aren’t in the Boardroom
In European countries, it is common for boardrooms to be filled with employee representatives. In the U.S., not so much… Here’s why.

Why Apple Is Hunting for This Commodity
Earlier this year, tech giant Apple began purchasing a specific commodity directly from miners. Trained geologist and resource investor David Forest thinks he knows why… and reveals what it means for investors.

The Unseen Corporate Bond Bubble
All eyes are on U.S. stocks. But behind the scenes, a bubble in corporate debt is forming. And rising interest rates could be the pin that bursts it…

In the mailbag, talk continues about the Trump-McCain feud…

I’m sure President Trump didn’t want to go. Why should he want to go to the funeral of someone who has done nothing but cut him off at every turn and was involved in the dossier that Hillary Clinton paid for?

His hands were dirty. Why would you want to go to the funeral of somebody who you didn’t care for and who didn’t care for you? I’m sure President Trump didn’t lose any sleep over it, the way many Americans haven’t… because we know he might have done some good things, but he did some very, very bad things, too.

McCain, a decent and brave fellow, huh? Man, you need to do some more reading. McCain’s incompetency in launching a jet off an aircraft carrier cost several crewmates their lives, for starters. And that mishap was covered up only because his father was an admiral. His fellow POWs referred to him as “Songbird McCain” for his singing to his captors as well. Then, as a classic politician, he sold out to everything and is called a “hero.”

I’ve got to call you out on your comment about Trump and John McCain’s death. He didn’t blather on saying disingenuous things; he merely expressed condolences to the family and acknowledged his service to our country. A totally appropriate response regarding a person he had been at odds with. It’s a “damned if you do; damned if you don’t” scenario. No matter what, many would be critical. I thought he struck an acceptable balance.

Editor’s Note: As Bill says, his mission at the Diary is to connect the dots… in politics… on Wall Street… and in the economy. But dear readers looking to relive adventures from the ranch are invited to reread some of Bill’s most memorable tales. Catch up here, here, and here.

The major news media isn’t reporting on what we call “Bailout Compensation Checks.”

That’s because it doesn’t want President Trump to get credit for some Americans receiving anywhere from a few hundred dollars to as much as $8,979 per check.

This is due to the 2008 bank bailout scandal, which Capitol Hill just remedied with law S.2155. It’s caused a domino effect in the markets – one that could mean thousands for investors.

How long this will last isn’t clear.

Act now for your chance at this payout… 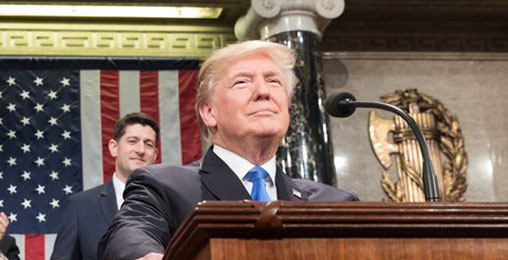