Gold spiked 5% yesterday – its largest one-day gain since 2008. If history is guide, a new bull market in gold is around the corner… 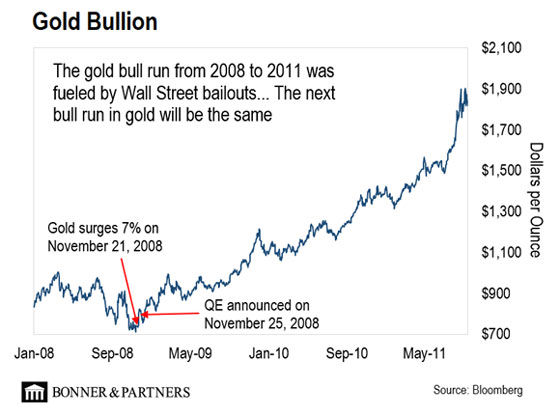 Over the next three years, gold went on to climb 157%.

Gold’s spike on November 21 was no coincidence. As you can see above, a Federal Reserve bailout was just four days away.

That bailout came on November 25, in the form of $600 billion in quantitative easing (QE). This QE quickly expanded to over $3.5 trillion in stimulus.

This week alone the Fed is expected to print $625 billion. And that’s just a small part of a stimulus package that could come in at as much as $6 trillion – almost double what the government provided in 2008.

If history repeats itself, the printing has just begun… and we’re on the cusp of another historic gold rally.