POITOU, FRANCE – Well that was easy!

I have already MADE America Great Again, just look at the markets, jobs, military – setting records, and we will do even better.

Hey, hey… we used to think a nation was made great by its hard-working people… its sturdy institutions… its capital formation… its art and culture… and its vernacular of unwritten rules and manners.

But now, we see how all it takes is one man…

…one genius… one brave patriot… one tireless advocate for all that is great.

Poor Herbert Hoover. What went wrong for him?

If a great man can single-handedly make America great, how come Hoover – who took office shortly before the 1929 stock market crash – failed?

Unlike Mr. Trump, who inherited a fortune from his father, Hoover was orphaned at nine years old.

He got himself through Stanford by working odd jobs… and became a mining engineer with projects in Australia, China, Russia, and South Africa.

While in China, he and his wife learned the language, and later used it to have private conversations in the White House. In China, too, he was besieged in the Boxer Rebellion. Mrs. Hoover used a .38 caliber pistol to fight off the insurgents. In Burma, Hoover survived malaria.

In less than 20 years, Hoover rose to become a very wealthy man, helping to put in place major new innovations in metallurgy in his mining interests all over the world.

He gave lectures at Columbia and Stanford, wrote a textbook on mining, and even translated the 16th century classic, De Re Metallica, from Latin.

During World War I, he managed the food program in the U.S. and the food relief program for victims of the war in Europe.

After the war, there was mass starvation in Russia, naturally, after the Bolsheviks had taken over. Working 14-hour days from an office in London, Hoover met the challenge as he always did, as unstoppable in his public service career as he had been in business.

Rejecting appeals from Congress to let the Bolshies die, he replied:

Twenty million people are starving. Whatever their politics, they shall be fed!

And fed they were.

So if there was anyone who could Make America Great Again after the Crash of ’29, it was the man in the White House, President Herbert Hoover.

He promised as much (but did not presume to be able to do it by himself):

We shall soon, with the help of God, be in sight of the day when poverty will be banished from this Nation.

Alas, even Herbert Hoover could not do the trick. The Great Depression began on his watch. It did not end until World War II.

Maybe Mr. Trump is smarter, more dynamic, or just luckier… Possibly. But the gods lay traps for those who think they are… and laugh at them later.

But let’s do as we have been bid to do. We will look at markets, jobs, and the military.

Our colleague and President Reagan’s budget advisor, David Stockman, writes that, while the official unemployment rate has gone down, the number of full-time, “breadwinner” jobs in America, as reported by the Bureau of Labor Statistics in July, was 73.83 million.

When the century began 18 years ago, the number was 72.73 million. Only 1 million decent new jobs have been created – while the U.S. population has grown by 48 million people!

Almost all the rosy jobs numbers are traceable to 1) people dropping out of the workforce, 2) low-paid, part-time jobs in the leisure and medical service sectors, and 3) inflation.

More than 50 years ago, a sharp French economist, Jacques Rueff, noted cynically that the reason inflation seemed to boost employment was that real labor costs declined as the currency depreciated.

Labor was cheaper; employers bought more of it. In other words, it was a way to rob the working stiffs without them realizing what was going on.

That is what is happening now. The inflation reading for July was 2.9%. Officially, wages are said to be increasing by about 2.8%.

This means the typical worker is now getting poorer. His main asset – his time – is losing value. How does that make America great again?

Next up, the military. When America really was great – the 1950s – President Eisenhower was cutting military spending, not adding to it.

As a soldier himself, Eisenhower knew the Pentagon operated like every other Deep State bureaucracy – gathering power and money to itself… while neglecting its core mission.

Trump’s extra sugar for the military will make America poorer… and weaker.

To cover some old ground… the Fed is predictable. It is always making one of three mistakes: Mistake #1: lending too much for too little for too long… Mistake #2: raising rates to try to correct Mistake #1… or Mistake 3: cutting rates in a panic after Mistake #2 causes a crash.

After the crash of ’08–’09, it made the biggest Mistake #3 ever: pumping nearly $4 trillion into the credit markets through quantitative easing in order to get interest rates down to zero.

Real rates (after inflation) were even lower. And even after being in “tightening mode” (Mistake #2) for the last two years, the fed funds rate – the rate at which banks lend money to each other – is still below the level of inflation.

The biggest Mistake #3 of all time produced the biggest stock market rally of all time… which finally peaked out on January 26 of this year.

Since then, we’ve been waiting to see how and when the stock market will get down off the ledge.

So far, it has failed to take the leap. In addition to the Fed’s negative real rates, buybacks – when a company buys its own shares and “erases” them from the board – have held it back. Goldman Sachs says buybacks will hit $1 trillion this year.

A stock buyback is an odd thing in a great economy. It suggests that the managers of companies can think of nothing better to do with company money than buy their own shares.

Buying your own shares makes your business look more valuable… But it doesn’t increase sales or profits. And it doesn’t add jobs, productivity, wages, or anything else that might really make America great.

By most measures, stocks are way overpriced. And sooner or later, we should see the kind of crash that wrecked Hoover’s reputation.

Then, we’ll see what it does to Mr. Trump’s reputation, such as it is.

The federal government’s budget deficit is ballooning this year…

That’s the story of today’s chart, which compares the cumulative monthly budget deficit throughout 2018 to the deficit at the same points during the previous two years. 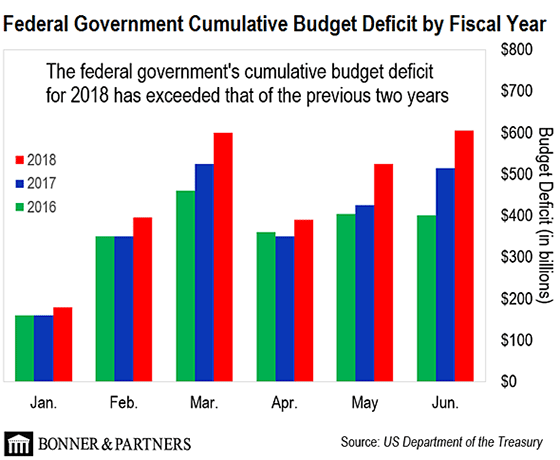 Why Apple Is Hunting for This Commodity
Earlier this year, tech giant Apple began purchasing a specific commodity directly from miners. Trained geologist and resource investor David Forest thinks he knows why… and reveals what it means for investors.

In Venezuela, One Million Percent Inflation Is Just the Beginning
Bill has previously reported that inflation in Venezuela could run as high as one million percent before the year is done. Now, the Maduro government is taking a drastic step, and it could send the country over the edge.

Google Knows More About You Than You Think
The modern internet user depends on Google. From search… to video streaming… to online shopping… and even email, there’s nothing Google doesn’t offer. But all those free services come with a price: your data. And you might be surprised to learn just how much of it Google is collecting.

In the mailbag, a dear reader considers America’s stagnant wage growth… and connects his own dots.

If income for most of us has increased only 13 cents per hour since 1999, and inflation is rather greater than that, then retail must be dependent chiefly on those in the top 10% for its prosperity. That can only go so far, especially since many of the 10% are actually borrowing much of their buying power (and the 90% must be largely maxed out on debt).

Our local mall, with several large department stores, closed a few years ago and was torn down to be rebuilt as an open-air center with a membership discounter, Costco, as the centerpiece. Similar centers with lower-priced “factory” stores seem to be doing pretty well at present. But for how long will the lower-price trend be successful – especially when Trump’s trade war is starting to raise the prices of imports and American-made goods?

An inflationary depression, similar to that in Zimbabwe and now in Venezuela, seems to be the last thing we need, but it could be in the offing. Remember, dollars are not really created by the Federal Reserve anymore, or even by the banks, but by Visa, MasterCard, Discover, and the like, as they raise their debt limits.

I suggest Morgantown, West Virginia. It’s a college town, the location of West Virginia University. The population is an estimated 50,000 – although this figure could be way off. It has an excellent medical school and hospital, a very reasonable cost of living, many cultural activities and sporting events, a moderate climate, and a red state political culture. It’s very pro-gun.

West Virginia is one of only two states in which every county went for Trump. Far, far from the usual campus liberalism. The school has produced a surprising number of Rhodes Scholars. There is good hunting, fishing, and skiing nearby, and an airport with fair air service; but the town is only an hour from Pittsburgh, from which you can get to anywhere. I will not be there, but studied there for a while some years back and return now and then for a visit. A very refreshing place.

I’d be happy to discuss our bolthole 60 miles east of Tulsa in northeast Oklahoma. We have 485 acres with 3,000 gallons of diesel in the ground, a generator, one year’s worth of food, 16,000 gallons of potable water, and two roads – one over a one-lane bridge, easily defended and/or imploded if need be, and the other also easily defended, with two sides covered by water.

Of course, we’re armed to the teeth. What makes northeast Oklahoma – a very rural area – attractive is that the rural population is very self-sufficient, well-armed, and generally despises government. If the wheels come off, provided we can get there before things get crazy (we’re 55 minutes away), we’ll be just fine. And the neighbor-helping-neighbor mentality is quite strong.

Dan, let me invite you to Martinsville, Virginia, 45 minutes south of Roanoke. Martinsville was once the largest manufacturer of wood furniture in the world, the single source of cotton athletic clothing in the U.S., and the sole source of DuPont nylon and Cannon towels and sheets. Lots of wealth was created; much stayed here, too. But now, as the wealthmakers’ generation passes on, Martinsville finds itself with a plethora of fine, but empty houses and handsome office buildings, also vacant.

It is an ideal bolthole for all who want to stretch their dollar further than they thought imaginable, a community with plenty of amenities, and comfortably close to not one, but two larger burgs, each with airports giving access to the world.

In 2008, taxpayer funds were abused by the bank bailout. Now, Bill S.2155 opens the door to the dispersal of “compensation funds” to anyone who claims them. 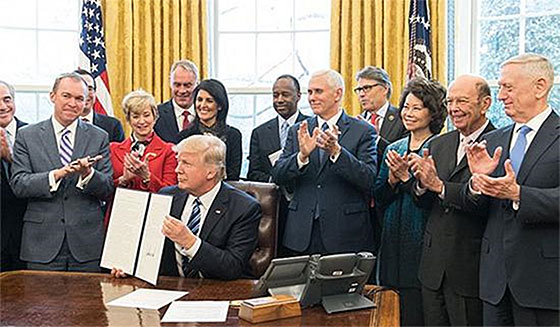